Today we went to Ephesus, but we had appointments with the Ferengi first.

Once again, we had to get up early, and after breakfast we were driven to a jeweller's. Like at the carpet outlet the day before, we were welcomed in perfect German by a man who had been brought up and learned his job in Germany. Or that's what he said, anyway. He told us he was a 'Gold' member of some guild or some such in Idar Oberstein, which is well known here for the precious stones and jewellery. He even showed us a framed certificate to prove it. Hmmm.

Anyway, this was a huge outlet. I've never before seen so much jewellery in one place! They didn't have any lesser materials than gold. And, like at the carpet outlet, they knew their job. The whole sale shenanigan took about three hours. Afterwards, it was on to a leather outlet. Same routine: warm welcome, offering of drinks, perfect German, and a fashion show this time. Afterwards, I went to the toilet (luckily, they were outside the sales building), and then I just didn't go back in. I didn't intend to buy leather clothes anyway. I sat down in a sunny and wind-still corner with my ebook reader until the rest of the group returned. Like at the jewellery outlet, a lot of people had bought something.

What many people don't know: if somebody stops you at customs on your way back home, you'll have to pay a lot of custom tax, as the value for things you are allowed to import to Germany is quite low. I've often seen on TV that customs are specifically attentive when people return home from Turkey. They just know that most people will have bought jewellery and leather clothes.

The morning had advanced considerably, so it was lunchtime when we left the leather outlet. We were driven to some remote spot for our lunch. It was well off any main road. It looked beautiful, a bit like a hacienda. Lunch was very nice, it was not a buffet of lukewarm vegetables; but you had the choice between two meals. After lunch, we finally went to...

Ephesus is easily the most impressive of the antique places I've seen1. It is huge, and well preserved. The weather was nice, sunny if not too warm, and Ephesus was packed with tourists like us. We had a great guided tour with lots of stories, information and tid-bits, and afterwards we were left to our own devices to explore what we wanted to see in more detail. This was great. We went and sat down in the amphitheatre for a bit, drinking some tea from our thermos. Then something strange happened: we had sat down not too far away from the entrance, and we sat in one of the gazillion rows there were. A group of Japanese tourists came, and they decided to walk around the theatre to the exit/entrance at the far end. For some reason I didn't understand, they decided that the row where we were seated was the ONLY row that would bring them to their goal, so every few seconds somebody stepped over our legs and bags. They were like lemmings. It was amazing – and annoying. After a while, I stopped to get my legs and feet out of their way, it was just too ridiculous, and there was no reason why they couldn't use either the empty row below or above us !

From there, we went to have a closer look at the Celsus Library. An Austrian team of archaeologists have meticulously reconstructed the front of it. I was most impressed with their work. Archaeological diggings haven't stopped yet at Ephesus, there's a lot left to unearth, and plans are afoot to go on digging there.

During the guided tour, Yekta had mentioned the ancient toilets there were, where the Roman senators used to sit and discuss politics while digesting. We hadn't caught a glimpse of them then, so I went back to have a look. 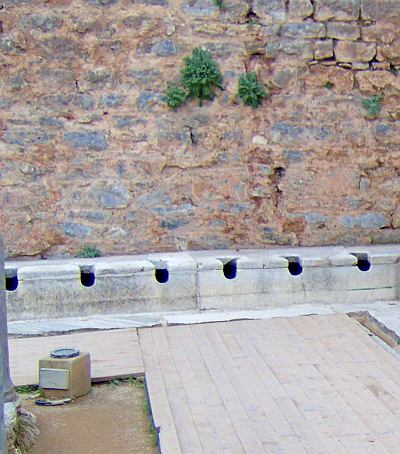 As you can see, the holes in the stone bench were specifically made for men, and there were many of them in a row. I asked my husband and two men from our group to sit down there for a photo, and they obliged. It showed that the distances between the holes were big enough for not-too-fat men to sit comfortably together. Beneath the stone bench toilet was running water which swiftly carried away all faeces and likely smells, too. Next to the toilets was the Roman bath. We were told that the toilets were even warm in winter (although the winter there may not have been too cold anyway). Just how the Turks went from such comparably comfortable toilets they had centuries ago to the holes in the ground they have now is a mystery to me. Maybe it's because this used to be Greek territory2?

On our way back to the entrance/exit we took a lot more photos. The craft work is absolutely stunning. Then it was back to the hotel for dinner.

I had promised to describe the hotel a bit more, so here is: as already mentioned, it was a very large hotel. We had a room at the end of one corridor, with no adjacent rooms. From our balcony we could see the Aegean again, and we think we even spotted Samos in the distance. In the morning, I had discovered various swallows' nests at the ceiling of the balcony. The swallows were very busy, I've never before seen so many swallows together. When we returned that day, somebody had destroyed all the nests, and the swallows desperately tried to cling to the blank walls where their nests had been. I felt incredibly sorry for them. I wish the hotel had left those nests undisturbed. Here, a swallow's nest is said to bring good luck to the home where it is built, and I guess only very few people would think of removing one.

After sunset, it got incredibly cold, we even turned the heating on. There was a cold weather front over Turkey, and over in Ankara they even had snow! We had seen the snow ploughs on TV. When we were back from dinner, I found a swallow on the floor in one corner of the balcony, seeking shelter from the biting cold. The next morning, it was dead. That was a real downer.

Apart from that, the hotel was magnificent, and the room maid was very creative: she had arranged the towels in a way that they looked like a turban, and had put a blue plastic rose on my pillow. The day before, the towels had been in the shape of a heart. I'll have to try that one day, it looked really nice.

My mother-in-law had her room on the floor above us, and at the other end of the hotel. She had a lift directly in front of her room, and this lift conveniently had direct access to the restaurant.

Although the hotel was so large and although there were very many tourists staying there, you didn't really notice it much, because it was spacious. The queues at the buffet weren't too large, either, because they had the same dishes in two sets. Staff was very friendly and very efficient. We checked the prices for rooms and to our surprise they weren't expensive: €80 for a double during the main season. If it wasn't for the language and the fact that a large part of Turkey is earthquake area, it would certainly be a place to live in comfortably as a pensioner.

We didn't have to get up quite so early the next morning, so we had a drink and a look at all the photos we had taken that evening before saying goodnight to my mother-in-law.

1My son has been to Greece once, and he said you'll find lots of similar places there.2No, I'm not obsessed with toilets. Honest, gov.