After we had spent a marvellous, sunny and warm day climbing through ancient ruins, the next day was a lot colder, but still sunny.

We had to get up early on Friday morning, as our departure was scheduled for 8.30am – suitcases and all. I like to take my time over breakfast, especially for such a fantastic one as we were offered at our hotel. The buffet had everything you could wish for, and they even had a cute young lad, probably younger than my sons, who made you an omelette if you wanted one. Now I love eggs in any shape or form bar raw, so you can bet I had an omelette (and lots of coffee, naturally) to start the day.

After breakfast we went to fetch our luggage which Fahri stowed in the bus, and then we set off to Izmir, which is the third biggest city in Turkey. On our way there we passed some unfinished tower blocks on a hill. We were told that after the big earthquake of 1999, where so many people died and houses were destroyed because they hadn't been built properly, new laws had been passed, and it had been found that the area those tower blocks were being built on wasn't safe. The ruins were left as a reminder and a warning. They certainly stick out like the proverbial sore thumb.

After about an hour's drive we arrived in Izmir. We had come from the south and drove along Izmir's promenade. Yekta (our tour guide) told us that where the promenade is now, there used to be the sea (apparently the Mediterranean originally reached to the houses on our right). He said that the promenade is very popular with the people in Izmir, who like to go for a stroll on it. Apparently, they're not the only ones, because the tourist buses come here to park and spit out their loads of foreigners who are immediately welcomed by dozens of Turkish men trying to sell them this item or that.

We were told that we had about an hour to do what we wanted before leaving for the next destination, and that the shopping mall was running parallel to the promenade.

There was quite a cold wind blowing, so we decided to have a stroll down the mall (expecting it to be more sheltered) before returning to the promenade. The first thing I noticed on entering the mall, was that there were orange trees lining it. The next thing I noticed was a shop selling hats! I love wearing hats (in fact, I had taken one of my hats to Turkey and was wearing it), so I went in and tried various hats and ended up buying one.

A bit further on, in a street leading back to the seafront, I discovered an empty shoe polishing stand. It was the first time I had seen one for real, so I stopped to take a photo. Imagine my surprise, when out of (apparently) nowhere, the owner popped up, sat down and grabbed a pair of shoes, presenting them to me for my photo. I thought that was lovely. Unfortunately, I was wearing sandals, so there was no business to gain, because my husband and mother in law (who wore leather shoes) hadn't stopped with me but walked on; but I still gave him some money. 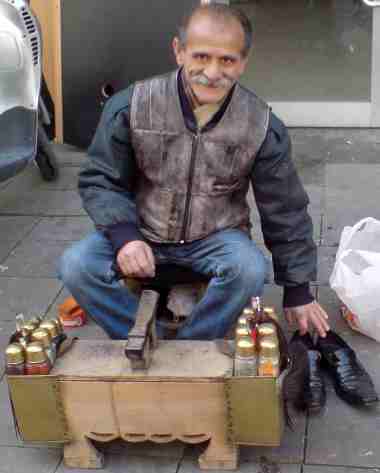 We went back to the seafront where we took some more photos. There were four young Turkish lads sat by the waterfront, and they shifted and bent for fear of being photographed. Maybe it was because we caught them smoking, I don't know. Anyway, I engaged in a conversation with them – as you do in a country whose language you don't speak.

They didn't speak much English, but we still managed to have some sort of conversation. One of them had been to Berlin once, visiting an uncle. Apparently, they were students, having a break or something – due to the language barrier it was hard to tell. They told me the word for 'hi' in Turkish, but I forgot. One of them asked me if I had a facebook account1 – I had asked and got permission to take a photo of 'my new Turkish friends' after all – but when I searched for his name once I was back home, I didn't get an exact match, and of the names similar to the one he wrote down, I couldn't possibly tell if he was/is one of them because I don't speak any Turkish and no photo matched the lad on my photo.

At about 11.30am we all embarked on the bus again and went to the Bergama Restaurant (near Pergamon) where we had lunch. It was another one of those mass tourism restaurants with a buffet of cold and lukewarm vegetables, but it had toilets, so the break was welcome for more reasons than one.

1They may not speak English, but they can pronounce facebook.