A couple of weeks ago, Malabarista provided us with a new Writing Challenge. Here is what she said:
'When you work in the office of an intergalactically recognised newspaper such as this, the strangest things keep turning up on your desk. So we weren't too worried when the following submission was beamed down to us from a distant star. Unfortunately, the hamster got to it before we could have a proper look, so all that's left is a single picture, and frankly, we have no idea what the heck it means.'

The assignment was to figure out what the picture below was about, and devise an accompanying text or picture to explain it.

At first, I was totally puzzled. I haven't been to a planet with giant earwigs yet. But then – somewhere between my fourth cup of coffee and the 500th outraged post on the Editors' announcements thread, it hit me like a ton of those square, heavy things that are used in construction.

So here is the picture – to refresh your memory – and my take on what it means. – DG 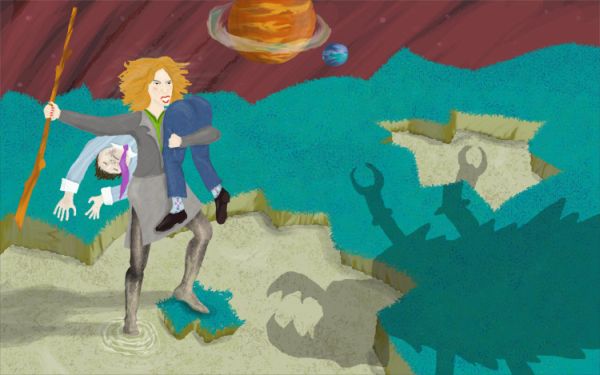 Falling asleep at the keyboard is never a good idea.

But HotFoot 1 had been working on the new H2G2 redesign for so long that it was inevitable. The pressure was enormous. The Usual Suspects were crowding the announcements page with a staggering volume of creative whingeing, so that the normal users couldn't even find the post that asked them to please, pretty please with sugar on top, leave the new site alone until the techies could get the bugs out.

Okay, okay, maybe the word 'normal' in connection with H2G2 users was inappropriate, but they could go be witty elsewhere. It all added to his headache, the one HotFoot was fighting with liberal amounts of tea and the occasional aspirin...wait, that wasn't an aspirin, that was his wife's sleeping pills...oh, dear...quick, coffee, tea won't cut it...he tried to stand, but the screen with its ghastly GuideML loomed ever closer...

The screen went liquid, sort of like that portal in Stargate, you know the one, and he had a fleeting thought of how disgusting it was going to taste and how it would probably make the roof of his mouth feel all horrible, the way it does when you're in the pool and get water up your nose, but maybe, just maybe, the screen wasn't chlorinated, even though it was really, really blue....

HotFoot must have blacked out for a moment. When he came to, sitting up and rubbing his head, he looked around at an alien landscape full of reds and greens. 'I must have fallen into Brunel,' he mused. 'Oh, well – it's an ugly territory, but I should be able to find my way out.' He stood up, straightened his tie (he had to wear it, there was an MP tour that day, and the only one he owned was this purple gag gift), and began to trek across the spongy ground in search of the Preferences sign.

He slipped on a hyperlink. 'Ouch!' he yelled, as he twisted his ankle. The link was obviously broken – it was damp, and its jagged caret edges were a hazard. A fellow could get a serious injury, and besides, this was his best pair of trousers. He limped on, looking for signposts and dodging pieces of code dropped by users posting from the new site without benefit of clergy. He had to get back to fix this.

Without warning, it loomed above him...the giant bug. It was huge, it was evil, it had pincers on. The tattered remnants of old bug reports clung to its spiky surface. This bug was obviously ancient, and wise, and battle-hardened. Programmers must have been trying to kill it since forever....maybe even since the launch of Classic Goo...HotFoot's heart sank. And me without a parser, he thought.

HotFoot decided to do what any self-respecting H2G2 programmer would do. He shouted at the top of his lungs, 'ANY VOLUNTEERS AROUND?'

Suddenly, he was swept off his feet. Not in the sense of meeting a girl at a bar (he wouldn't, anyway, he was married, remember?), and not in the sense of logging onto the latest patch of Conan, the Codeslayer, but in the more mundane and definitely disorienting literal sense. 'Hey!' he yelled, as his view went from horizontal to vertical and his horizon narrowed to include a pair of sleek designer boots and some rather well-filled tights. "What the...?'

'No cursing,' replied a sultry, well-modulated female voice. 'This is h2g2.'

'No, it's not,' he protested. 'It's H2G2. Or it will be, anyway...' His rescuer did not bother to reply, as she was busy monster-fighting. All he heard was the roar of the Virtual Bugblatter Beast, and the thump, thump, thwack of the cyberwarrior's quarterstaff. He groaned. I am NEVER going to be able to get this into a progress report, he thought.

He tried again to gather data. 'Who are you, anyway, and what are you doing here?' he demanded, his voice somewhat muffled by contact with a cashmere sweater.

The answer came calmly, in between thwacks: 'I am Buffy the Bug-Slayer...Scout, Ace, and Community Artist...'

Her voice was a bit smug. 'You did ask for a volunteer.'

1The real username of the technical person involved has been withheld in the interests of avoiding moderator ire.