Our arrival in SK was a noisy one: the school children were there to sing some special songs for us, and all the villagers ran out cheering and clapping to accompany the bus as it trudged its way along the sandy tracks to the horse and donkey compound.

Over dinner (rice and vegetable gloop) we got better acquainted, and I could identify various groups. Of the biker fund-raisers there was only Dai, though he was accompanied by me, and another biking WAG, Katherine, who'd been here with me in February. We were also honoured to have Gert's widow, Annette, with us, as she would be performing the official opening ceremony.

There were a couple of vets, who were investigating a strange sickness that was affecting many of the donkeys. It was similar to sleeping sickness, and as a brain disorder it did mean that they quite often heard the phrase "Don't forget your bucket of donkey brains!", even though I suspect I may never need to utter this phrase again in my life. We did wonder how they manage to get these brains back to the University in Scotland to analyse them – were they in fact a notorious pair of donkey brain smugglers? Rather prosaically, as vets they have a licence to import such things, which wasn't nearly as windswept and interesting. We'd met the vets during the Raasay ceili in May, and to add to their medical skills they also play the bagpipes and the fiddle.

There were various horse and donkey supporters and sponsors. Much of their focus was given to making sure that donkeys wear proper head collars, as opposed to the painful and dangerous Sengalese bit, and there were occasions when the bus would almost screech to a halt as someone shouted "Stop! There's a donkey with no head collar!" and they'd all rush out and grab various bits of bridle until they found one that fitted.

Then there was a group of arty types: as well as the opening of Calum's Road, there was a recently constructed nursery school to be unveiled, and so 3 classrooms had to be decorated.

The next day, Dai and I wondered how best to occupy our time. He was staying on for another week to fix motorbikes, including a special motorbike and sidecar ambulance. But meanwhile, how would we pass the hours? I'm not very artistic, and I didn't fancy spending a lot of time with the horses either, but I knew I could fetch water, maybe mix paint, and generally act as gofer. We headed to the nursery school to see what we could do.

The first room had a theme of "numbers", and the artist in charge had made a start of creating a panel on the walls to be filled with dots and numerals. But she was struggling to work out the measurements to make all the squares even. I soon saw that adjustment for the width of the masking tape had to be taken into account, and eagerly produced paper and pencil to do some sums. Delighted that I was able to utilise my Maths skills, that room became "mine".

Dai continued to explore the "colours" room next door, and finally the "animals" room, where a stunning mural centred on a baobab tree surrounded by a wide variety of animals was taking shape. Unlike me, Dai is quite talented with a brush and paints, and he became mural artist Lorna's main assistant, mixing colours to the right shade, painting the leaves on the tree, and most importantly providing background music to paint to. All the rooms were constantly being visited by locals and children, but it was the animals room that attracted the most attention. 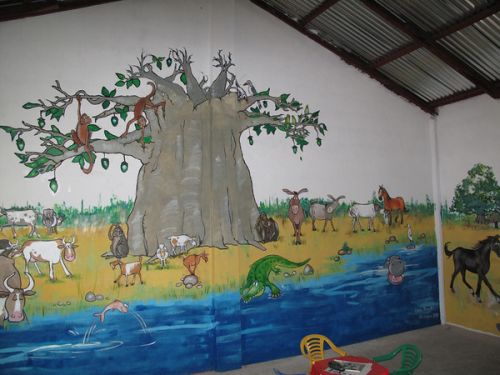 Meanwhile, I was having to improvise in the absence of tools. Did anyone have a spirit level? No. Was there a plumb-line? No. Well OK, I could make one of those with a bottle of water and some string. Was there any string? Ermmmm…

We had Wednesday, Thursday and Friday to complete the painting, with a short respite on the Thursday afternoon for a trip on the river, where joy of joys we saw some hippos playing in the water!

The 3 days were quite intense, and we'd often be in bed by 10 pm, exhausted. I was glad I'd brought ear-plugs, as the noise during the night from the various animals was quite loud. We did encounter problems with the mosquito net over the bed, which fell down one night, requiring me to go on a hunt at 2 a.m for anything at all to put it back up again. Surgical tape and a safety pin being all I could find in our bedroom, I wandered further, eventually locating some blu-tak, which seemed to do the trick, temporarily at least.

All too soon it was Saturday, which began with the annual horse and donkey show. The various classes were judged by the vets 1 and we were seated in the front row as guests of honour. I can sympathise with the poor Queen– she's stuck somewhere in front of God knows what entertainment, can't sneak off for a quick ciggie or pick her nose, cos everyone's watching her, she doesn't know how long this will last, what or when her next meal will be, but she's got to look appreciative and impressed the whole time. We were impressed by the fast and furious game of donkey football which rounded off the morning's proceedings. This was invented as a means of encouraging the young boys of the village to care for their donkeys and build up a good rapport with them, and it's an exciting spectator sport. 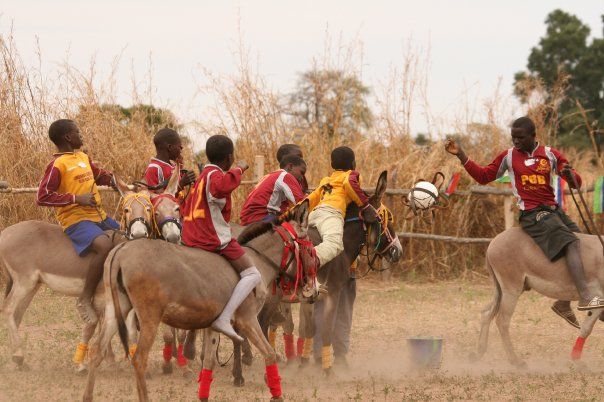 Lunch at the compound was a rather chaotic affair, which always makes me uncomfortable, so I really appreciated Dai being there looking after me. We then had the poignant business of travelling to Calum's Road, complete with balloons to decorate the trees. The vets played the tune "Calum's Road" on the fiddle, and bagpiped some other familiar Scottish tunes. Gambians love speeches, and so the ceremony took quite some time, especially as the speeches had to be translated into Mandinka and Fula languages. Annette bravely cut the red ribbon, and then the whole party marched down the road, to the strains of "Scotland the Brave".

After this was complete, we returned to the school yard for the official opening of the nursery (more speeches of course!) before going back to the compound. A group of villagers arrived and produced a surprise visitor, who performed the Mandinka dance of happiness for us, a wild dervish of a dance while wearing some leafy branches and juggling with a large knife. And the evening rounded off with a "disco" in a field, where we quickly discovered that dancing on a dry dusty surface is not good for your throat.

On Sunday we said our goodbyes to those staying on for a while longer, including Dai, and made the journey back along the south road. There were fewer people on the bus this time, so I was less worried about the stack of luggage on the roof. But the esoteric cargo we were carrying included 2 live chickens, several pumpkins, a bag of charcoal, and of course a bucket of donkey brains.

Back at the hotel I refused to return to the pizza place, but took advantage of Annie's wish to try some local fish, and took her to the Calypso bar right on the beach. I'd eaten there before and knew it was good, plus it was only a short stroll from the hotel. We tucked in with audible pleasure to our grilled barracuda and foil-baked ladyfish.

The rest of my journey home was fairly uneventful. At the airport duty-free I spent my last dalasis on a bottle of peach schnapps, which sounds so like the opening line to a country and western song that I might just have to write it!

But a week later the snow and ice had returned, with major disruption to flights. Dai was due to fly back into Gatwick at 3 am, and hadn't booked a hotel as his Belfast flight was at 8.30 a.m. However I could see from the real-time Gatwick flights information that the flight out TO Gambia hadn't even left yet, so there was no way he was going to make this timetable. Much anxious phoning and fretting followed. They landed at Gatwick 12 hours late. Fortuitously, his earlier Belfast flight had been cancelled, so FlyBe were able to put him on standby for the next available flight. It had been originally scheduled for 15.20. It actually landed in Belfast at 23.00. The arrivals hall was full of happy relatives and friends waiting for their loved ones to make it home in time for Christmas. I was reminded of the opening scene and voice-over of Love, Actually.

So, an eventful week, and a neat and magnificent completion of a task that was begun at the start of 2010, though I could have done without it being in similarly disruptive Arctic conditions. Health and happiness to all users of the road!

1How do you know what makes a good ass, I joked with one of the vets later. Years of field research, he told me.