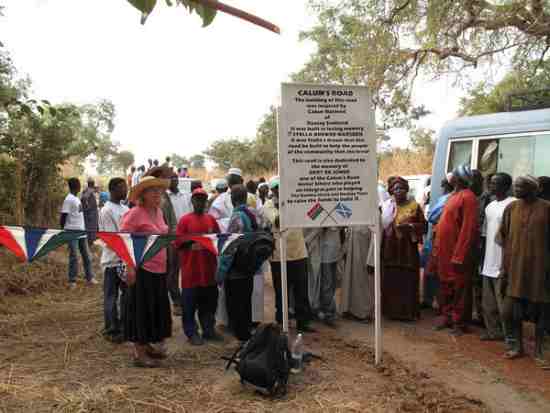 I hadn't intended to go back. Certainly not in December, which is always busy with family commitments, Christmas concerts, office parties etc. But it was the official opening of Calum's Road, and after all the ups and downs of 2010 I really didn't want to miss that. So back to The Gambia I went.

As it turned out we almost didn't get away at all.

The flight to Banjul was leaving at 7.30 am on Monday from Gatwick. We were booked on a Sunday evening flight departing at 17.30 from Belfast City to Gatwick, and had reserved a room in a nearby hotel for the night, looking forward to enjoying a decadent meal before we were out in the bush, devouring whatever blob of rice and vegetable stew we were given.

We arrived at Belfast airport in plenty of time (I only live across the road), and I even discovered that my best friend was flying back to Heathrow from there at around the same time, so we were able to catch up over a GnT in the bar. Her flight left on time, ours was delayed by 45 minutes. Never mind, we had books to read, and iPhones to play with. We boarded the plane, and THEN the captain announced that there was a problem with the weather at Gatwick, but they'd keep an eye on it and report back in 20 minutes. What followed was almost a revolt from the passengers. It was fairly obvious that the likelihood of the weather at Gatwick improving as night continued to fall was slim. And yet we could check via the internet and live arrivals information that other planes were managing to land there with little difficulty. One passenger even stormed up to the cockpit and accused the pilot of telling outright lies. He was cautioned with being put off the plane altogether.

Time went by, and eventually at around 19.30 the pilot came back on and announced that due to freezing fog at Gatwick, this flight was now cancelled. I looked at Dai and said 'Do we have a Plan B?'

The passengers tetchily got off the plane and started queuing for either a refund or a rebook on the first flight next morning. Unfortunately that would be too late for us to make the connection, so while Dai collected our large suitcases, I searched, using the trusty iPhone, for any other flights going to London that evening. There was one in 30 minutes. The good news was that there were two seats left. The bad news was that they'd cost me £280. The even worse news was that it was going to Luton, 75 miles north of Gatwick. Never mind, I reasoned, we couldn't totally abandon the trip without having a darn good attempt at making the plane.

Before switching off our phones, Dai used the power of the internet to put out an appeal on his Facebook page for any information on the best way to get from Luton to Gatwick at 10 o'clock on a cold Sunday night. By the time we landed there were plenty of comments containing links to various train and coach sites … and an offer of a lift from a fellow biker1. Truly above and beyond the call of duty, but one which we gladly accepted, arriving at last at our hotel at about 1 a.m.

An early start saw us meeting up with about 20 other members of our party, and comparing notes on our journeys so far: some of the Scottish crew had had an untroubled trip, others had had a nightmare leg similar to our own. But before long we were airborne, and trying to identify the various landscapes we were flying over. The Sahara desert looks absolutely stunning when viewed from this height! 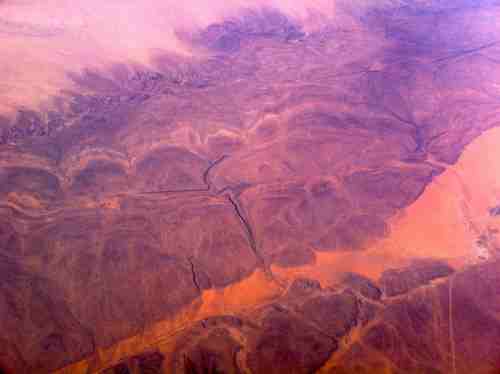 The trip from Banjul to Sambel Kunda (SK) takes about five hours, so we were spending the first night in a main tourist resort at the coast. Dai and I decided to treat ourselves to a room in the Ocean Bay, a rather upmarket place where we'd stayed on our last visit in February, which held many happy memories for us. Some sad ones too, as we remembered times with Gert, the member of the fund-raising biker posse who'd been killed recently in an accident. We took advantage of happy hour by the pool to enjoy a cocktail or two, and we played bingo (I won! An amount of money equal to double my stake, and a little wooden crocodile.)

Our evening meal was with the whole group in a pizza parlour a short walk away. I'm not a big fan of pizza, particularly as I'm watching my carb intake at the minute, but didn't want to disrupt the plans. I know how difficult it is herding a large group like this. I survived by only eating the topping on half of my veggie pizza, and discovering that Annie, the economist I was sat next to, shared my taste in white wine.

The mini-bus taking us to SK was due to leave at 10 am the next morning. Gambia, of course is on GMT – Gambia Maybe Time – and everyone knew that if the bus got going by 12 it would be doing well. There was much faffing to do with batteries for pick-up trucks, much hauling and shouting as all our luggage was piled onto the roof, and an awful lot of standing around. But we did eventually get underway. The last time I'd taken this trip we had avoided the south road2, in a very poor state of repair, but that had meant a trip on the Banjul-Barra ferry, followed by five hours in a bush taxi along the north road, followed by half an hour on a small boat, followed by 20 minutes on a donkey and cart! Much work had been done in the intervening period to the south road, and there was now just a patch in the middle which was still pocked with potholes. I did worry that our top-heavy vehicle would keel over on some of the steep parts.

We paused for a quick leg stretch in Soma, and Annie enquired about some chestnut-like items being sold at a roadside stall. The female vendor (vendress?) just smiled at her, but a bloke came along and explained that these were good for men to take, could make them go oooh 3,4,5 times a night. As it dawned on us that these were in fact nature's answer to Viagra it was difficult to keep a straight face. Poor Annie, we still tease her about the 'shagging nuts'.

Tune in next week to find out what happened when we arrived!

STOP PRESS! Mike, the youngest of the bikers, wasn't able to travel far in December as his wife was due to give birth to their first child. She's just had a baby boy … and named him Calum. Warmest wishes go to all the family.

1In his car.2There are two main roads in The Gambia, running almost parallel to the river, one on the north side and the other on the southern side.