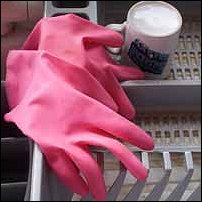 A couple of weeks ago, we threw down the gauntlet to our readers and writers.


After the editors stopped hopping around (the gauntlet was left over from Malabarista's collection of medieval armour) we sat back and waited for the submissions to roll in. And roll in they did. Apparently, we were right: You folks know how to fix the world's problems. And you can do it in a thousand words or less. We are proud of you – if occasionally alarmed by the suggestions.


MinorVogonPoet joins Bel in offering us a solution to the world's problems in verse. It's green, and evocative of the dreams of our youth. We thank her.


We gather before dawn


as the city festers


beneath an orange glow,


in a troubled land.


ranting against the world;


and arms crossed with cuts;


crying babies in their arms;


all who walk through streets paved


not with gold but tears,


where cars and lorries churn

We find a neglected strip of land


between railway lines and walls


Armed with gloves and secateurs


we battle brambles and broken glass,

We plant rows of runner beans,


When the city shimmers


in summer haze, we hold a party.


Mini-skirts and saris, suits and jeans


mix and mingle, laze at tables,


to the ancestral garden.