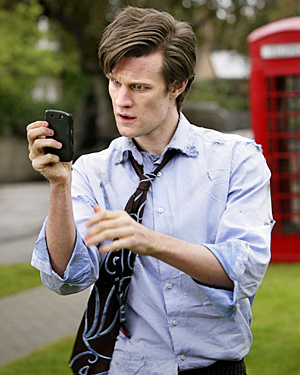 Beginning in November 1963, Doctor Who is the longest-running science fiction TV series in the world, spanning 26 consecutive years in its original form. It revolves around the adventures of a traveller in time and space generally known as 'The Doctor'. He is accompanied on his travels by a number of companions (also known as 'assistants') and faces alien monsters, historical villains and misguided maniacs all over the galaxy, but he often admits that Earth is by far his favourite planet.

This was the fifth full series since 2005, and the 31st series in total. Perhaps confusingly, it was also known as 'Series 1' during production, as it was the first series produced by the new team1. It saw the introduction of Matt Smith as the Eleventh Doctor. A new Tardis was introduced, as well as a new sonic screwdriver, new Daleks and new companions in the form of Karen Gillan as flame-haired Scot Amy Pond and Arthur Darvill as Rory Williams. Behind the scenes, Steven Moffat replaced Russell T Davies as lead writer and executive producer for the series and he was joined by fellow executive producers Piers Wenger and Beth Willis.

Music for the series was composed by Murray Gold, as it had been for all episodes since 2005.

After the Doctor's regeneration, the TARDIS needs to rest. Where better to do so than a sleepy English village with a duck pond and no ducks, an escaped alien prisoner and a young girl with a crack in her wall?

Note: This episode was slightly extended from the normal 45 minute slot, coming it at 65 minutes long. Amy Pond, Rory Williams and the village of Leadworth all make their debuts here.

In the far future, the survivors of England live their lives on a massive space ship. What sinister secret lies behind the Smilers? Who is Liz 10? And why is the election such a foregone conclusion?

Victory of the Daleks

A phone call from an old friend brings the Doctor and Amy right into the heart of Winston Churchill's war room. Churchill has a new weapon to pit against the Nazi menace. His chief scientist calls it an Ironside. The Doctor knows it's a Dalek. But why is the Dalek pretending not to know the Doctor?

The Time of Angels

River Song leaps back into the Doctor's life and drags him into the Maze of the Dead to hunt down a rogue Weeping Angel. The Angel is not alone - and Amy has something nasty in her eye.

Note: This episode is the first of a two-part story concluded in 'Flesh and Stone'.

The Angels are regenerating and time is running out. As the Doctor comes to terms with the gravity of the situation, Amy is startled by the appearance of the crack from the wall of her childhood bedroom thousands of years in her own future. But Amy has more to worry about than not blinking - this time, she can't even look!

The Vampires of Venice

The Doctor gate-crashes Rory's stag-night to bring him worrying news about Amy. His solution is to take the troubled lovers on a date to Venice, but instead he places their lives in danger. There's definitely something fishy going on...

Note: This episode was slightly extended from the normal 45 minute slot, coming it at 50 minutes long.

It's five years later and a married Amy and Rory are expecting their first child. Or it's now, and they're still with the Doctor aboard the TARDIS. They might be under attack from alien-possessed pensioners, or heading into the gravitational pull of an icy sun. Either way, it's a deadly dilemma. Welcome to the domain of the Dream Lord.

A drilling project is interrupted by a disturbance in the ground. As the drills come to a stop, something else is drilling upwards from the centre of the Earth. An ancient race, much older than humanity, has awoken once again. The Doctor finds a vast civilisation beneath the surface of the Earth. Meanwhile, Rory discovers the 'best of humanity' might not be enough to save them and Amy meets a Silurian scientist who has terrifying plans for her body.

Note: This episode is the first of a two-part story concluded in 'Cold Blood'. It features the reappearance of a branch of the race known as 'Silurians, previously seen in 1970 and 1984.

Once again, the humans and the reptiles face the dilemma of how to live together in peace. Representatives from both sides come together to find middle ground, but for some, the idea of co-existence is too frightening a prospect to consider. As a solution appears, so too does the mysterious crack that has followed Amy throughout her life...

Vincent and the Doctor

A shadowy figure lurking in a painting inspires the Doctor to journey back to meet the man who painted it. Vincent van Gogh is a troubled soul, plagued by visions. But this time, there really is something monstrous that only he can see. If the Doctor and Amy can rescue Vincent from a deadly alien, is it possible for them to also save him from his demons?

The TARDIS has disappeared, leaving the Doctor stranded on Earth. With something blocking the TARDIS from materialising, the Doctor must pass himself off as a normal human being until everything's put right. Acting normal? How hard can that be? His new flatmate, Craig, is about to find out.

Deep beneath Stonehenge lies the Pandorica. It's a legend - a myth - and its mere existence is enough to cause the Doctor to worry. Up above, the spaceships of every alien race he has ever defeated are circling the skies, waiting for the right moment to descend. There are surprises for Amy and River Song too, but they won't have long to come to terms with them. The Doctor has failed. The TARDIS is destroyed. And soon, the entire universe will cease to have ever existed.

Note: This episode was 50 minutes long. River Song and other guest characters from this series are joined in this episode by a number of alien races from Doctor Who's recent past. To say which ones would be too much of a spoiler, but there are references to many more dating right back to the earliest years of the series. This story is concluded in the next episode, 'The Big Bang'.

A lone Roman centurion grieves for the loss of both his beloved and his whole existence. Help is at hand from a strange man with a fez, a mop and an annoying habit of disappearing. Nearly two thousand years into the future, an adventurous child meets her future self, spends a night in the museum and discovers she has the whole universe in her dreams. Meanwhile, Amy has almost everything she needs for the perfect wedding day. Everything except something old, something new, something borrowed and something blue...

Note: This episode was 55 minutes long.

1This confusion prompted Steven Moffat to dub the season 'Series Fnarg' in his column in Doctor Who Magazine.