I'm re-running this one, just to point out that you don't have be a Londoner to write about London. Hint for Olympics writers.

Name Dropping: How to be a Foreigner 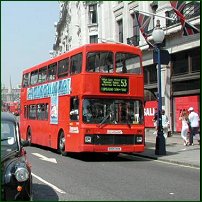 There we were, Klara and I, standing on the pavement or sidewalk or whatever you called it, and drinking in the atmosphere of the wonderfully exotic city of London. The year was 1975, the month was March, and the weather was a revelation – cold, blustery, sun, rain, wind, snow, more wind...I was exhilarated and intimidated at the same time.

There had been moments when I'd thought I wouldn't get to see this legendary place, even after my German girlfriend had casually invited me to go on this semester-break junket. The boat-train had been awesome – standing out in the brisk Channel wind, thinking of every single factoid I knew about this stretch of water, mentally reciting Rupert Brooke's poem about it, but not feeling the least bit seasick myself...wow, land of the ancestors. The place where my name came from... Having been raised by people who insisted, on the slim evidence of nomenclature, that we were English, I had foolishly thought I was going, well, home.

That notion had slipped a bit at Dover. There, in a giant customs shed, were lines – no, queues, you called them queues – queues for returning British, queues for Commonwealth citizens, and so forth. Klara had joined the queue for the European Economic Community, the Canadian we'd met on the train had gone over to Commonwealth, and I had humbly betaken myself to the sign rather contemptuously (I thought) marked 'Other'.

The immigration fellow had looked me over suspiciously, his eyes travelling from the passport he was holding (cautiously, as if it might bite), to my curly head and long upper lip. There was something about my face that apparently didn't please him. Since I had spent the last six months with that same head in a book of medieval philology, I had no idea what the problem was, not having heard about what the IRA was up to. After intense questioning as to my motives for being there, and assurances that I would go back to my German studies just as soon as I had gotten a gander at the Houses of Parliament, I had been permitted to rejoin an impatient Klara and board the train to London.

It was only after encountering the security measures in the British Museum and the Tower, and after the third Englishman had cocked his head and remarked, 'But you look Irish,' that the large, brown penny had dropped.

I understood, mentally berated my relatives for immigration snobbery, and was trying to keep my head down.

Being pretty much a professional foreigner, I was enjoying myself: people-watching is fun, and picking up customs and snatches of phraseology by observation is my idea of a holiday. So there we were, on the pavement, waiting for an honest-to-gosh red double-decker bus to come and take us to the neighbourhood of Buckingham Palace.

The first difficulty had been in figuring out why everybody was queueing on an empty sidewalk. Surely you just milled around? Germans do it, Americans do it...no. You had to queue up. Feeling silly, I did so. Someone had told me, 'One Englishman on a street corner looks smug. Why? Because he's first in the queue.'

The buses appeared to be travelling in packs – for safety, perhaps. Instead of one Number 5, then one Number 10, and so on, there were three Number 10s in a row. This was good, as an awful lot of people seemed to want a Number 10 bus. A lot of them must have been foreigners like us, who didn't know the drill, because when the first Number 10 came, they all piled on, only to be chased back off by the bus conductor, who shooed them away as if they were naughty chickens.

'No! No! No! Goodness gracious me, no! Too full! No standing! Wait for the next one!' Chastened, the queue reformed, while I marvelled at the expression 'goodness gracious me' out of the mouth of a grown man. Fascinating, these London bus conductors. Had their own language.

Finally, our bus came, and we boarded, up to the top, of course, how could you miss the opportunity to be in the upstairs of a bus like that? The view was splendid, the statue of Eros, magic name signs going by, names you'd read all your life – Piccadilly Circus, Marble Arch...we gawked, Klara and I, and chatted in German, trying to figure out how to buy the ticket.

This problem was solved by the appearance of the bus conductor, an apparent cousin to the one on the Number 10. He looked at me benevolently. 'Do you speak English?' he asked in a musical voice.

I smiled my ingratiating-foreigner smile. 'A little,' I confessed. This did the trick, and the kind gentleman, bless him, sold us 5p tickets and told us where to get off, in beautiful English flavoured with the accent of Pakistan.

On our way to the Palace, Klara quizzed me anxiously about our appointment. Klara was Lower Rhine through and through, tighter than a Dutchman, very proper, and very Catholic. So Catholic, in fact, that she had refused to accompany me to the Richmond Baptist Church in Surrey the previous Sunday – whither I had gone, curious, and returned, happy, with an invitation from someone I had met there. We were to meet him at the Trade Entrance to Buckingham Palace because – so William assured me – he knew a really good place from which to watch the Changing of the Guard.

I figured he knew a vantage point not in the guidebook, and accepted gratefully, remarking that I was bringing Klara along. The more, the merrier, he said.

Klara was really keen on this Buckingham Palace business, because like many a young lady at that time and place, she was dead gone on royalty. She read about them in magazines. Woche der Frau and Sieben Tage would have gone right out of business had it not been for European rulers and their photogenic children: in these slick pages crowned heads showed you round their palaces, paraded their fashions, and demonstrated that they were at heart honest, wholesome family folk.

Klara ate this sort of thing up. Thus it was a good thing that I was there, ready to catch her, when Mr William Davis, Esq, footman to Her Majesty, having met us at the Trade Entrance to Buckingham Palace, led us inside said Palace, up the back stairs to the servants' quarters, where he lived, and pointed to the view outside his window.

'Best view in town,' he grinned.

The Queen was not in residence. There was no serious breach of security. And, after all, I didn't belong to the IRA1.

But we dropped a lot of names in the next couple of hours – William's career was like a history lesson come to life. He fed us lunch, showed us his photo album, and let us touch the 200-year-old uniform which he wore to ride behind the Queen Mother in parades. I thought Klara would faint dead away when William told her that the teacup she was drinking from was part of a set given him by the Queen last Christmas.

Then I thought she'd drop the teacup. But she didn't. She was a trooper.

That evening, an elderly German Lutheran nun laughed merrily as I told her the surprising story over tea. She threw up her hands as she exclaimed with mock envy that she'd lived in this city for 30 years without coming that close to royalty.

'You will be too grand to talk to us now,' she teased, as Klara sat, still stunned by her close encounter.

I laughed. 'I doubt that. But the people here are certainly wonderfully welcoming to outsiders.

'They make you feel at home – even if you aren't English.'