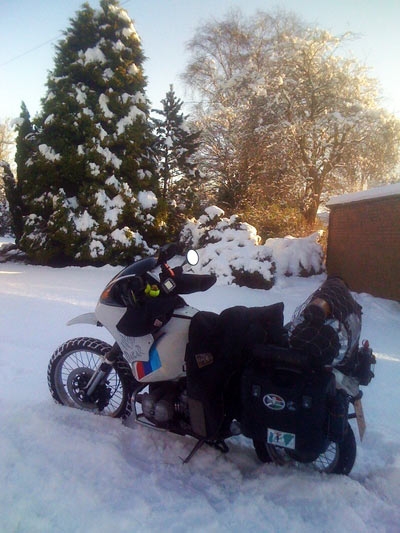 Delays continued to hamper the start of this motorbike trip, and the weather had stubbornly refused to improve: a satellite photograph of the UK showed it completely covered in a blanket of white snow. Dai gave up any attempt to go north to Scotland, and instead opted for the overnight Belfast-Liverpool ferry, which he eventually made on the Wednesday night. This was my chance to observe the 'Marauder's Map' in action, and I marvelled at the modern technology which allowed me to pinpoint precisely what road he was on as he circumnavigated the city.

The Scottish contingent reviewed their options: Glasgow-based Mikey's bike had gone on fire at Christmas and he still wasn't sure if he'd get a replacement on time; Freeloader, who lived a mile down a forest lane, had no way of getting his bike near a road and reluctantly decided to pull out of the trip; two of them on the East coast agreed to put their bikes in the back of a van and drive to Liverpool to meet up with Dai, and re-assess the situation from there.

At the other end of the country, two Devonians and a Londoner proved they weren't such soft southerners, and decided to make a break for it before the predicted blizzard was to hit Kent, successfully making the channel crossing by the Friday. They were less successful at riding together as a group however, largely due to their unquestioning devotion to the commands given to them by their sat-navs, each of which was issuing different directions.

Dai, the two East-coast Scots, and Andres from the Midlands left Liverpool on the Saturday. The main roads were all passable, but getting on to the motorways, or going to petrol stations, proved extremely treacherous, and more than one rider dropped their heavily laden machines. Thankfully these drops were all at low speeds, but the damage to Sock's bike meant that his battery wouldn't hold its charge, and he had to stop before Folkestone to attempt repairs.

After a long day, encountering the Kent blizzard at the finish, three very cold souls checked in to their hotel next to the Eurotunnel, as per the original plan. And just as they had ordered their first drink at the bar, Mikey arrived! He'd got a replacement bike that morning, had been up since 3 am packing his panniers, and had ridden like the swiftest of winds to join them for their departure from the UK.

On Sunday, they made their scheduled crossing using the Eurotunnel, and headed south. I was watching the 'Marauder's Map' on my computer and actually shouted out loud 'Oh for goodness sake, you're not actually going THROUGH Paris???' Apparently Andres knew the city very well, and led them through the notorious labyrinth of tunnels and roundabouts. Sadly, no-one was able to get a picture of these huge machines roaring around the Arc de Triomphe, so you'll just have to use your imaginations for that spectacle!

Monday was a long and very cold crossing through the middle of France, itself like much of Europe in the grip of icy temperatures. On Tuesday, the temperatures plummeted to minus 10 degrees (possibly lower – that's as low as their temperature gauges went). Batteries on cameras and phones refused to charge. Hitting a patch of freezing fog, their visors froze, and when they lifted those, Dai's glasses froze over, and he found himself unable to see a thing. A very scary stop on the hard shoulder ensued, with Dai rifling through the panniers to find his contact lenses, before trying to insert them while mighty lorries were hurtling by. By the time they reached Perpignan near the Spanish border that night, they were all exhausted, and collapsed into bed at about 9 pm.

After the physical and mental toughness of the previous few days, Wednesday started well. They crossed the Spanish border as the sun came out, and the temperature gauge showed a positively tropical 8 degrees – practically 20 degrees warmer than those they'd encountered the day before. There was good news from Sock – his bike fixed, he'd caught the ferry to St Malo and was currently in Bordeaux, and hoping to meet them in Spain in a couple of days. The not-so-soft southerners had already reached Benidorm, where they were enjoying plenty of tapas and red wine. But most of all, they were drinking in the sorely-missed sunshine.