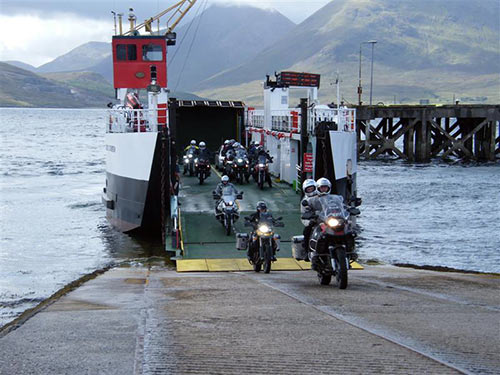 Calum's Road: will they ever get going?

I think it was the tennis ball that finally did it for me.

Dai had talked a few weeks back about constructing a device which would hold a sponge on a piece of elastic, cradled in half a tennis ball and attached to the bars of the bike. That way, mucky visors could be cleaned en route. Great idea! Except I didn't hear anything more about it until early afternoon on the Saturday, when he called me just after I'd been shopping.

'Have we any tennis balls around?' he'd asked. And I realised that he hadn't even started making this contraption, and yet he was due to depart on the Monday morning before dawn.

I nagged a bit about the lack of time, but managed to call into a sports store on the way home and pick up a single tennis ball for 49p, so there was no great outlay required.

I presented the ball with great aplomb, whereupon he asked:

'Have we any elastic?'

I launched into a tirade about how it would have been really useful if he'd posed this question BEFORE I'd gone shopping, or preferably, some time last week when he'd have had time to try it out. As it was, no, there was no thick elastic in the sewing box, but tell you what, I'll walk the dog down to the garage, even though the snow is thick on the ground, and see if they have any.

Of course, the wee woman in the garage just laughed when I asked for knicker elastic, but at least the poor old Max had enjoyed his walk.

I know I like to be organised and well-planned. I am an inveterate compiler of lists: in fact, lists are for wimps, what you need is a decent spreadsheet. But at least the odd list lying around the place would have given me some sort of comfort that he was suitably prepared for a 6-week motorbike trip to darkest Africa. He kept reassuring me that everything was in his head, and every hour of every day I kept being reminded of what a poor storage device this was. He 'just popped in' to the phone shop when we were in town on a different errand at the weekend, having remembered that his phone was out of contract and making sure that it would work while away. This was THE DAY BEFORE HE WAS DUE TO LEAVE!!!!!

Planning for the trip had started well over a year ago, but even then it seemed some of the 20 strong participants felt that planning was a dirty word – sure you just get on your bike, keep the sea on your right, sand on your left, and ride. The credit crunch didn't help, and a number of the guys had to drop out due to lack of funds. It didn't stop their supporters, though, and they have to date raised the fantastic total of over £30,000. Not bad, as my sister remarked, for a bunch of men!

In the autumn, a number of aid workers were kidnapped in Mauritania, one of the countries en route, and the FCO advised that it was not safe to travel through. Alternative routes were hard to identify, or were even more dangerous. Some of the guys dropped out at this stage, and no-one could blame them. The rest armed themselves with GPS spot locators, so that we WAGs1 could follow the little red dots on google maps, and check that they were at least heading in the right direction. I likened the devices to the Marauders Map from the Harry Potter films, which appealed to the gadget freaks among them.

So by Christmas there were only about a dozen hardy souls still willing to make the trip. (Willing? Champing at the bit more like!) And still the calamities continued. One bike spontaneously combusted just before Christmas, at a time when the insurance company and BMW dealer were unavailable until well into the New Year, after the due departure date. Another of the guys was rushed to hospital with anaphylactic shock, and identification of the cause was not forthcoming.

As if that wasn't bad enough, the weather closed in with a vengeance, and a thick layer of snow and ice covered most of the country and refused to budge for about three weeks. The planned start from Raasay in Scotland seemed downright foolhardy, especially as half the riders would have to battle treacherous conditions on the way up, only to turn round and face them all over again heading south. So a revised start date was agreed, relocated to Folkestone on the south coast, ready for the crossing into Europe. Provided the tunnel was working, of course.

I undertook to organise the homecoming ceilidh on Raasay for later in the year – the snow should have melted by May, I reckon. I've already designed my spreadsheet!