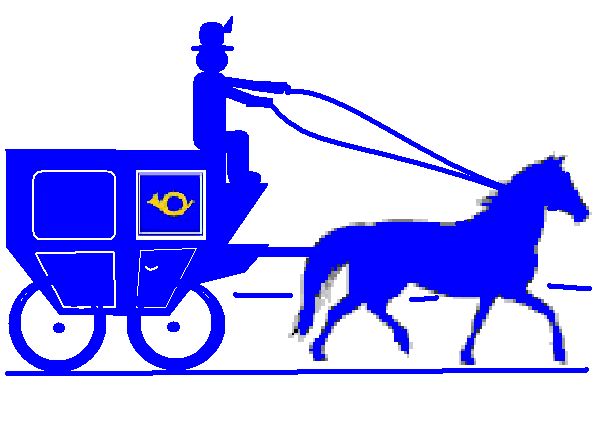 (Do you hear the postillion

He brings us letters from

You probably wonder where the connection is between the opening quote and the tenth birthday of the h2g2 Post. I pondered about that myself when I wondered what to write for the occasion. Any one birthday usually prompts us to look back (particularly special ones like this one) and so did I. I had a look at the very first issue of the h2g2 Post ever1. A lot has changed between then and now: the Post has seen Editors come and go, contributors, readers, Italics. The skin changed, as did the Front Page design. New media were introduced, like the famous Beeblecast. A couple of things have stayed with the Post throughout all these years, though: Shazz (well, she's not a thing, of course!) and the name: The Post.

Reason enough for me to wonder: whose idea was it to call the Post Post, and not, say, Tribune, or Herold? Was the Researcher who suggested the name a secret fan of The Washington Post? Or did it seem evident to choose this name because the contributions in h2g2 threads are called 'posts'? We may never find out, but fact is, that the term 'Post' in connection with the written word has a very long tradition.

The COED2 has the following to offer (amongst other things):

This all makes sense, but there may be another origin – at least, if you are German, like me. It may derive from Postille, from Latin post illa (verba sacrae scripturae), meaning 'after those (words of the holy script). These were explanations of texts from the Holy Bible, and the term is first documented in the 13th Century where it was used by the theologian Hugo de Saint Cher (1200 (?) - 1263). The most important Postille during the Middle Ages was the one by Nikolaus von Lyra with over 100 printouts between 1471/72 and 1520. It is said, that Martin Luther was hugely influenced by it. His Kirchen-Postille (church-postille) from 1521, as well as the Luther Bibel which he had translated during his ten months stay on the Wartburg, were very important for the Protestants who had to remain secret, and were smuggled and spread in large numbers within Germany and to various other European countries. An important Catholic Postille was the Haus-Postille (book of devotion for the home) by L Goffiné in about 1690.

Later on, the Postille changed from being a book of devotion to being a script for edification. In the 20th Century it became a subject of irony through Bertholt Brecht's Bertolt Brechts Hauspostille, and Franz Graßhoff's Halunkenpostille (scoundrel), the texts of which were often recited in cabaret as well as being sung as chansons. Nowadays, a Postille usually means a leaflet of sorts, or a newspaper which consists of only a few sites, and the word Postille is mainly used in a derogatory way. Whatever its current usage, though, the fact remains that it is all about the written word.

And how comes the postillion into the equation? Well, he was the one delivering the written word, be it in the form of a Postille or post. You'll certainly see how similar the words Postille and Postillion are, and anyway, this song just popped into my head somehow. I think, that 'Post' is an abbreviation of what started as Postille all these centuries ago. In that sense, the h2g2 Post is continuing a very long tradition of spreading the written word, and its ten years of existence attest to it.

Here's to the h2g2 Post, its team, contributors and readers, past and present. Long may it continue!

1Be prepared for a 'classic' shock when you click this link.2Compact Oxford English Dictionary.