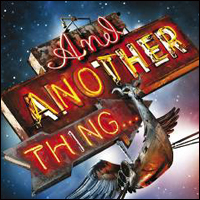 If ever a book needed the words DON'T PANIC inscribed in large friendly letters on its cover, And Another Thing was it. Instead, we get a sort of Viking longboat, and the words Eoin Colfer. The words Eoin Colfer are large, they are quite friendly, but they aren't re-assuring. They aren't reassuring for the simple reason that they don't spell out the name of the dearly departed Douglas Adams.

The writer might be different, but the cast we know. This is a group of characters we last saw in the dark days of 1992, facing absolute certain death on an alternate Earth (and all possible Earths besides). I'll admit, I didn't fancy their, or Mr Colfer's chances.

I'll admit even more freely that I was wrong.

And Another Thing Review – Eoin Colfer's Hitchhiker's Guide to the Galaxy

Let's get this out of the way straight away. And Another Thing isn't Douglas Adams.

While we're getting all this off our chests, And Another Thing doesn't suffer greatly through not being written by Douglas Adams. It does have its weaknesses, but they are far outweighed by Eoin Colfer's strengths. This is a well-written and tightly plotted book that uses Adams' characters brilliantly.

Colfer starts by writing his way out of the hole Douglas left for him. Arthur, Trillian, Ford and Random are plunged back into Stavro Mueller Beta, and the world is ending. Luckily for our hoopy band of froods, safety is only an outstretched thumb away – predictably in the shape of the best bang since the Big One.

From then on in, it's a slightly different Hitchhiker's experience. Part of the uniqueness of DNA's first five books was that plot was generally an afterthought. The driving force of the series was a collection of jokes loosely progressing to the point where the pages stop. Colfer approaches things slightly differently – there's a beginning, things roll swiftly on to the middle, and we have a resolution of sorts.

That's not to say we get get something unrecognisable as a Hitchhiker's book. The sheer, boundless joy of And Another Thing is that we get Douglas Adams' characters in Douglas Adams' settings, written in a way that's not forcing itself to be Douglas Adams. And I can't understate just how great it is to see them all again. As a teenager, I loved the Hitchhiker's books. When I learned of DNA's death in 2001, I remember feeling a real pang of sadness that Ford Prefect (as far as we knew) was about to be blasted to pieces, and he'd never thumb his way out of it. Seeing Mos Def hurling himself at Ford and missing in the 2004 film just compounded my misery.

Colfer makes up for Mos Def in spades. He gets under the skin of Adams' characters and there's no point in the book when you think "No, Zaphod wouldn't say that" or "Man, Arthur's off key here". This is the work of a fan, and that connection he made with Hitchhiker's folklore really shines through.

Things aren't all sweetness and light, though. Part of the appeal of the original Hitchhiker's series was Adams' ability to go off on an amazing tangent without taking you out of the situation. Colfer's "Guide Notes" slam on the brakes and stop the story dead for increasing lengths of time. What's more, some of his notes don't quite come off (the "religion" note that Topless Robot have based their entire non-review on being a prime example).

Colfer also takes throwaway creatures – Douglas' cows that want you to eat them, and his own flaybooz – past the point of being funny and into absurdity. A cow that suggest it would make a good steak is amusing. A herd of them cheering when some of their number are killed isn't.

But let's not dwell on the negatives. Eight years ago, a literary genius died. He took with him some of the English language's best characters. We'll never, ever get Douglas Adams back, but for now, once again, I got to spend an evening with Ford Prefect, Arthur Dent and Zaphod Beeblebrox. For that, I have to thank Eoin Colfer.

If he decides that he's got another HHGG in him, then I for one will await it with bated breath and rising excitement.