No, really big. I mean you might think space is big, but that's just peanuts compared to China. It's the most populated country in the world, a fact that we are reminded of almost everywhere on our journey. 1

We landed at Beijing Capital airport (its code is still PEK, referring to its former English name of Peking). There was only a short delay while our temperatures were checked for any indication of swine flu, and as we passed smoothly through passport and immigration controls we were struck by the number of staff wearing masks. This swine flu business is taken very seriously here!

We caught the cool monorail link between the gates and the main terminal (Terminal 3 at Beijing is the world's largest, built to accommodate the huge volume of visitors for last year's Olympics). Having failed to find a bar, we opted for iced coffee in a Starbucks-clone instead. Dai tried to take some photos of the impressive terminal building and was nearly arrested. On the two-hour internal flight to Shanghai we were served a somewhat odd burger thing. At the baggage carousel we had fun trying to spot our potential tour companions, with considerable success! But then, white Western faces are something of a novelty in these parts, as we keep discovering.

And I do mean very bright lights and very big city. On our arrival, it's 8 pm heure locale, and the temperature is still mid 30s and humid. Being in the sub-tropics, there is little variation in temperature between day and night. The streets are thronged with people, shops are open, and street traders take up every available square inch of space. As a city it's fairly new2, although it's been a trading port for many years, but it really expanded when China started to look outward. It is now home to 25 million people (and at that is still not China's biggest city), and about 1/5th of the country's GDP is created here. Our hotel is 34 stories high, and we have a buffet style supper there and start to get to know our travelling companions. The ground floor is named Floor 1, American style. We try to order a drink in the bar, but the system seems complicated, requiring ordering from Person one, who shouts the order to Person two, who prints out a chit to be given to Person three along with payment. We find this multi-person selling system ubiquitous. The bar is also on the expensive side, and so we resort to the little 24 hour shop across the road, which doesn't do vodka, but does sell beer and Bacardi Breezers at a reasonable price. Dai tries a bottle of some mystery liquid at about 70p, but it is reminiscent of poteen or slivovic, and decidedly unpleasant. I have no bottle opener to open my Bacardi Breezer, so to save my teeth I buy a colourful souvenir one from the hotel shop— a snip at a mere 70 Yuan. (There's about 10 Yuan to the pound).

Friday: breakfast has a huge array of foods to cater for all tastes, Eastern and Western, and we dine on fruit and yoghurt with some dumplings. Our tea and coffee is served by a young lady called 'Trainee'— this seems to be a popular name. Vick, the local guide, tells us on our journey through the choking traffic that The State owns the banks, therefore no collapse of financial institutions here. (Mind you, in the UK the state now practically owns all our banks too!) The State also sets the petrol and gas prices.

We start our tour of Shanghai in the Yu Yuan gardens, which are delicate and beautiful, with scarily large insects, lots of Koi fish, and arresting views of new Shanghai skyscrapers glimpsed through the older curved rooftops. We explore the local market and have our first experience of the oppressive hard sell from the vendors. I try haggling over a fan (the most important first purchase in China: the temperature stays stubbornly in the mid- 30s and the humidity is around 70%). Her opening offer is 180 for one, and I think I've done well to end up with two for 140, until I realise that's about £7 each, which is easily way over-priced. But it's unfair to describe this as being fleeced: if someone offers a price and you're prepared to pay it, then that's a fair deal. Besides, we're rich Western tourists, it's in our job descriptions to be overcharged on items at least once in each location. Per day. 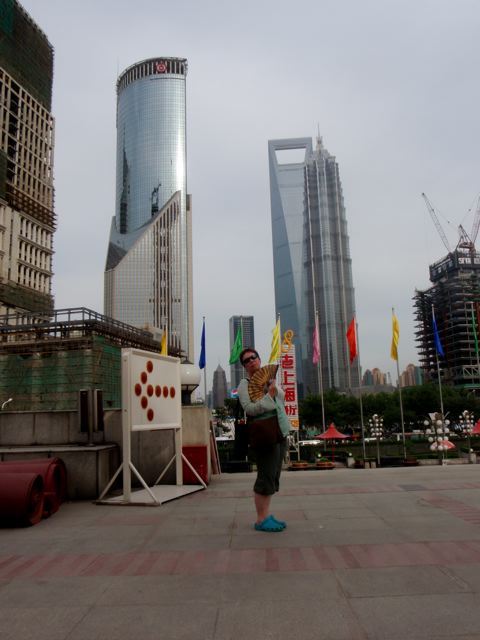 We escape the hassling traders in the air-conditioned Western splendour that is Starbucks, and enjoy people-watching from the front window with a blessed iced coffee. A Dutchman outside is changing his belt right in front of us, and we give him a round of applause as he successfully completes his task with the aid of a Swiss army knife. We rejoin our group for lunch in a lovely airy room, and it includes jellyfish, pak choi, dumplings and spring rolls. Afterwards we take a boat cruise on the Pu river to get a good view of all the skyscrapers, including one with my name on it (BEA). Dai is delighted to discover that the boat has real vodka. We then explore the main shopping district, Nanjing Street, where we are again plagued by watch pedlars. In the space of three minutes, Dai is offered hashish and some personal services. Does he look that desperate? We find a shop that sells Smirnoff! 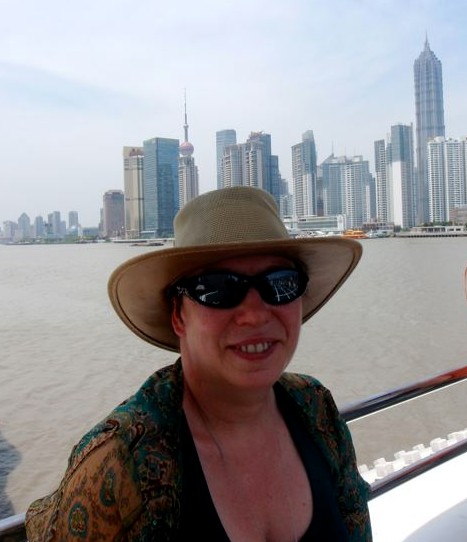 Back at the hotel, my sensible head has pointed out that it's approaching the weekend, we're about to set off to an inland location, and it would be a good time to change some travellers cheques (we brought a dollar mixture with us, which turned out to be a good move). I visit the Bank of China next to the hotel, and with much form filling and stamping, and passport photocopying, my transaction is complete in a mere 15 minutes. I delight in pressing the 'satisfied' button on the instant feedback device that is in front of many many service providers (banks, immigration officials, etc). Dinner is delicious and includes crunchy radish.

The traffic in Shanghai is scarily congested! We are inching along the road at 7 pm on a Friday night, and the acrobatics show is due to start at 7.30. (We just about make it in time). Traffic lights appear to serve the same function as the picture on front of a packet of Uncle Ben's rice— merely a suggestion. Any gap at all is instantly filled by five bicycles, two electric scooters and a moped held together with parcel tape. Often the scoots will be carrying a whole family; youngster perched between Dad's legs, and Mum holding a parasol on the back. During the day, the riders often wear extended cuffs to protect their arms, (or their jacket on backwards) and a rainbow effect full face visor.

We take our seats in the Shanghai Centre with seconds to spare, but lots of the audience also arrive late, obviously victims of the same dire traffic as us. The show is full of astonishing, gaspingly hand-over-mouth how-did-she-do-that flexible performers. It starts with a group of attractive diabolo-wielding girls in gorgeous bluebell coloured silk palazzo pants. They are followed by a succession of contortionists doing impossible things with their bodies, including going from horizontal splits to standing upright just by pressing on their thighs. The production is a bit bland— there is only one background fly of the Shanghai skyline, and the lighting is rather tame. But I'm cavilling. The performers are astounding, and deserve the standing ovation they receive at the end of the show. Traffic is still heavy on the way home. As we leave the coach I try a Dzaijan (Goodbye) to chief tour guide Lily and the driver, who both roar with laughter, and say 'Very good!' Emboldened, I try Wo shou-de bu hao (I don't speak it very well), at which they erupt in fits of laughing, later explaining that no-one actually tries to speak their strange tonal language. I find that rather sad.

Back at the bar, I've managed to persuade the staff to find me a glass of white wine, which requires more shouting and form filling from three people. The barman, who had understood my initial request and has a very good grasp of English, asks 'You are French?' and I reply Women shi Eirlanren (We are Irish.)

On Saturday we visit the Shanghai museum, which is a beautiful building set around a central atrium, and houses a huge and priceless collection of bronzes, jade carving, and paintings. Dai buys me a souvenir umbrella, to keep the sun off me. We visit a silk museum and learn about how silk is made, which I find fascinating, and I buy a silk duvet (I'd already been planning this purchase since Teuchter had mentioned it). I also treat myself to an unusual green and black silk jacket. After lunch we visit the jade Buddha temple, and then the Oriental Pearl tower, which has a glass floor on the viewing gallery, that even I find distinctly nerve-wrecking to walk on. Dai is approached to have his photo taken. We don't really believe that the citizens of a cosmopolitan metropolis like this have never seen Westerners before, but then of course the tourist attractions are also visited by many Chinese from outside the big cities. Dinner is in a restaurant next door, and we shudder at some of the British imperialist conversation from our tour group, who are wondering why the Chinese haven't progressed past chopsticks. We take the impressive Maglev train to the airport for a late flight to Huangshan (Yellow Mountain). It rapidly reaches its speed of 300 km/h. It does go faster, up to 430 km/h, making it the fastest land based public transport system, but is restricted during the hours of darkness.

During the security check at the airport, the girl frisking me finds a tampon in my pocket.

'Can you take it out?' she goes on, so I remove it from my pocket. OK, granted it looks like a little while bullet.

'How do you use it?' she continues, by which stage I'm almost looking for the You've Been Framed camera, and I explain with some discreet hand movements that it's for ladies' sanitary requirements.

But it does highlight the lack of Western influence in many areas.