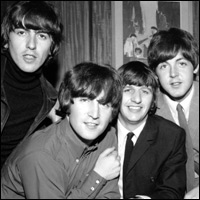 I didn't have any misconceptions about our ability to do anything other than play music...
- John Lennon

In a week that’s seen John, Paul, George and Richard (Ringo to you)'s back catalogue get a digital makeover, as well as appearing in a computer game, it’s time to turn our minds to the full cultural impact of the ‘Fab Four’. Commonly regarded as being second only to Elvis Presley in the ‘things that changed the course of musical history in the 20th century’ stakes; are we a little TOO overawed by the Merseyside magicians? With this in mind this week’s topic is The Beatles.

With the 60s dead and buried, is it time to admit that they were just a bunch of guys with guitars? Just a bunch of long-haired reprobates who contributed to the declining moral standards of the West? Or the best band ever, bar none?