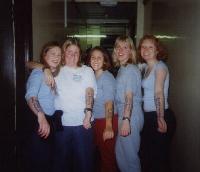 Raisin weekend is an age-old tradition of St Andrews University, and in the fashion of many age-old traditions only dates back to the early 20th century. It is a wonderful excuse for the entire student body to party while embarrassing as many freshers as possible. The local police step up security around the town for the event and this year even the national press wanted in on the act so they could show the world what Prince William can expect when he joins the University next September.

Raisin Weekend takes place on the Sunday and Monday of the second weekend in November each year and is based around the University's Academic Family system. In this, each fresher find themselves a set of parents. Only penultimate and final year students are allowed to be parents... so 3rd and 4th years and 2nd year medics. In practice many first years will end up with more than 2 parents, lots of brothers and sisters as well as a full extended family of aunts, uncles and cousins. All in all it makes for great nights out as everyone tries to get to know each other. Parents are found entirely at random, in Halls, at Societies or at the bar. I have 2 mothers, Mags and Claire, both fourth years who live in my hall, and my dad is Neil a second year medic who I met at the Christian Union. Half of my closest friends are my siblings, and there are plenty of 'incestuous' relationships throughout the University.

On the Sunday of Raisin Weekend family parties occur throughout the town. Mothers hold 'tea parties' for their children in the afternoon before the fathers come and fetch their kids for more parties throughout the evening. My mothers combined with several other families resulting in about 30 people congregating at the end of a corridor in our hall for 3 hours with the sole aim of having a good time. We had sheets spread on the floor to protect it and a huge plastic box full of punch, which started the afternoon orange but 2 hours and 23 litres of alcohol later had turned pinky-red. Needless to say a good time was had by all. We all intended to pace ourselves so that we could get to our dads parties in one piece, however after the first 'boat race' (a drinking game where the members of teams try to down their drinks one after another as fast as possible) it became clear that this wasn't going to work.

I settled in the corner under the protection of 3 of my brothers (forgetting that Tim and Olly are both medics and so well practised in lengthy drinking bouts) and joined in the rounds of silly games. These included passing a polo around a circle on strands of raw spaghetti (needless to say we were seated guy, girl, guy, girl and the spaghetti got shorter each round), this was followed by 3D twister where instead of placing hands and feet on coloured circles you have to place hands, feet, bums and faces on to the appropriate body parts of members of the opposite sex. We wound up with feeding each other chocolate mousse blindfold, swordfights up and down the corridor and a very drunken version of 'Simon Says'.

After this point most people departed for their dads parties while I retreated to my bed to recuperate for a couple of hours as I didn't have to meet Neil until later. My paternal siblings and I assisted each other in getting to Neil's house for an alcohol free party, which nevertheless managed to get quite manic and included wide games in the park. I retreated to my bed by half past ten, picking up my roommate on route, in an attempt to get enough sleep in preparation for the Monday morning fancy dress foam fight in the Quad.

As part of the Raisin Weekend each child gives their parents a bottle of wine (it used to be a pound of raisins, hence the name), and in return they receive 'raisin receipts'. From their fathers they usually get a large, awkward, heavy object that has to be carried through St Andrews to the foam fight. Then they go to their mothers where they get a raisin string that they hang off their red undergraduate gowns and are put into fancy dress for the foam fight. Generally children end up wearing as little as possible, and are then paraded through the streets of the town as they make their way to the Quad that is always cordoned off. In our family we had Flintstones and Squaws as well as the three blue mice that I was a part of. Two of my brothers meanwhile were dressed in tutu skirts and vests, while Tim was dressed in a Stars and Stripes Tunic and presented to four of his sisters as a raisin receipt.

By 11am nearly the entire first year, accompanied by parents and assorted onlookers (notably press photographers) was gathered outside St Salvators Quad in various states of fancy dress and armed with cans of shaving foam for the fight. Raisin receipts, including Tim and my 'stick-man' with shoes, a traffic cone body, a washing hook for a neck and a defrosted chicken for a head from Neil were all dumped in a large skip outside the Quad before we entered and the mayhem commenced. Within five minutes it was only possibly to tell who people were by height and tiny glimpses of costume under a layer of foam. The quad looked like a blizzard had blown up, and with all visible areas of skin already covered, foam started being put down necks and up backs, as well as being reapplied to faces - with particular emphasis on eyes, ears and mouths.

The fight was over within an hour and after a round of posing for parents... cameras we all raced back to join the queue for hot baths and showers, and to put our clothes in the washing machine. Sad to say the blue mouse costume did not survive, but my raisin string - a Winnie the Pooh bubble maker - more than made up for that. Normality was restored, and some of us even made it to afternoon tutorials. Needless to say we can't wait till we can be parents ourselves and go through it all again, I think we might be taking full advantage of our roles as aunts and uncles to the children of our medic siblings next year.