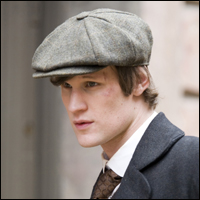 In what, at least at first glance, appears to be a lovely bit of casting, the young actor Matt Smith is set to become the eleventh Doctor. The nation's favourite time traveller, the weird and downright eccentric 'Doctor', is an iconic character up there, as Matt himself points out, with Robin Hood and Sherlock Holmes. We wish him the best of luck in his new role. (And is it just us but don't you think he's got the touch of a younger Bill Nighy about him?)

Anyway, our thoughts this week are focussed on the eleventh incarnation of the Doctor, and also on other aspects of the TV show Doctor Who. We'd like to know: