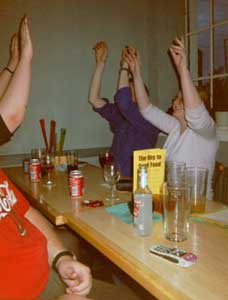 The SRG cordially invites you to HAMSTER1!

This is our annual2 Halloween meet. We'll be meeting in the traditional gathering place for Glasgow meets, the Counting House in St Vincent Place, from 2pm3. Once we're all gathered we'll hopefully still be sober enough to do something suitably spooky (as if walking through the streets of Glasgow isn't scary enough)...

Several non-regulars have hinted that they may turn up, so in order to prevent the usual confusion4 it would be useful if the regulars could make themselves as conspicuous as possible, by wearing an h2g2 t-shirt, carrying a towel, or growing a massive ginger beard.

1HAlloween Meet Scaring The Erstwhile Researchers (or something).2-ish.3Earlier if you're really keen.4People turning up, not seeing anyone who looks like a hootooer and leaving again.