Saturday April 23rd was a very special day for me. Not because I was *very* tired as a result of Friday's debauch1. And not because I had to get up at

o'clock in the morning. But because I was going to Copenhagen to meet Hati - the renowned <red>

from Estonia, Tartaronne from Djursland (important part of Denmark) and Milla and her family from Sweden

I got on the train - and fell asleep instantly... The next thing I remember is meeting Hati under the big clock in the middle of Copenhagen's central station. Recognizing her was no problem - even though it was actually true that she had dyed her dark hair red. I had met her twice earlier - the first time was during the first Nordic Meet in Esbjerg in the Easter of 2002.

Tartaronne didn't show up so we went to put Hati's backpack in one of the luggage lockers - and then all of a sudden Tartaronne showed up after all! We were in good time (at that time, anyway...) so we went to grab a cup of

and even had a couple of croissants too - and then the cigarettes came out...

Then we headed for the zoo. At the same time we realized two things:


After a number of telephone calls we finally sorted it out and when the Swedes arrived we were waiting for them, comfortably sitting on a park bench in the sun and waving with my

that I got from Hati the last time she visited me.

We had a lot of fun watching all the different animals. What impressed me most was probably the greenhouse filled with

s and a lot of other butterflies. Why? Well, it reminded me very much of Hati's greenhouse on my ship The Blood of the Zaphodistas

Late in the afternoon we had to make a tear-stained parting, first with the Swedes and later - at the central station - with Tartaronne. Hati and I went to my place and a few days later she hitchhiked to Santragenius V (who sadly had not been able to participate in the meet

). From there she returned to Estonia the following day. 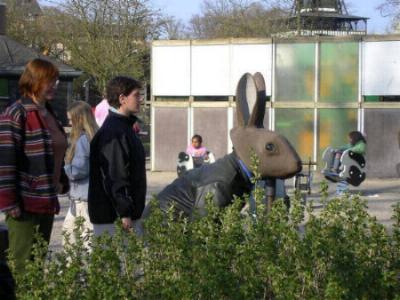 1An extended version because all Denmark had a church holiday...