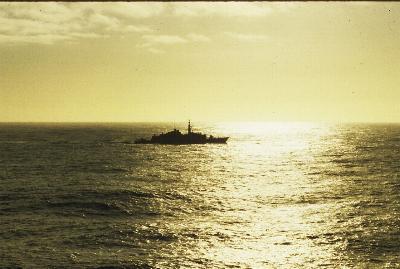 'Dozens of men are feared dead in the seas around the Falkland Islands after the container ship, Atlantic Conveyor, and the destroyer HMS Coventry were hit by Argentine missiles1'

23 Years ago, the British Government faced a crisis when sovereign territory at the other end of the world fell into enemy hands. The invader had massed forces dug in close to home, backed up by overwhelming air superiority. The international community quickly expressed serious reservations about supporting a recent colonial power and Britain was on her own.

You might think any government finding itself in such a predicament would quickly set aside thoughts of recovering the occupied territory. But such a course of inaction would have been utterly alien to the British mentality and the politicians in power at the time. And we mustn't forget the glorious Nelsonian tradition that had bolstered naval confidence through years of peacetime feasting, recounting and accounting. No matter how slim the Navy list or the chances of success, on this occasion the British were going to fight!

Warships and other vessels were rapidly recalled from duty around the world and even from breakers yards. Troops and aircraft were gathered and preparations made for the long voyage south to liberate the Falkland Islands.

But, in their heart of oaken hearts, the British commanders knew this operation was going to be touch and go. A cunning plan was needed, a knockout blow. Something that would not injure civilians, but was so frightening it would cause the Argentinians to withdraw without a fight.

The hunt was on. In the deepest depths of the Admiralty, all sorts of secret contingency schemes were pulled out of dark cobweb infested alcoves. One such plan involved the rapid transformation of a discarded merchant ship called Atlantic Conveyor into a multi-purpose aircraft carrier. If successful, this slight of hand could instantly reverse the enemy air advantage. A good bargaining chip at any negotiating table! 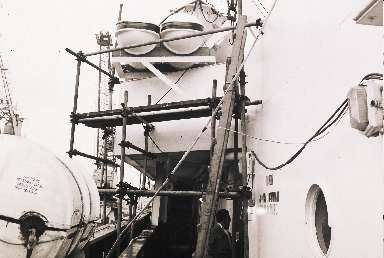 At the time, I was a naive fresh-faced young officer with a head full of history, who had spend two weeks at Dartmouth with the Reserves and thought I was Hornblower. Yes, I had been weekend sailing on minesweepers whilst at university and was obviously 'ideally suited' for a special mission upon which the war might depend. But then, there was literally no one else available. All the well trained officers in my branch young enough to fight were already on their way south. The powers that be were scraping the bottom of the barrel and the first shot had not yet been fired.

In the blink of an eye, I found myself standing on the deck of the secret ship Conveyer as her appointed medical, watch, diving and press relations officer. Not bad for a first job eh? All around me there was frantic activity, thick steel plates being welded on, cranes lifting new machinery, engineers looking at plans, workmen busy. The ship was permanently enveloped in a cacophony of clanking, sparking, banging and hammering. They even patched over the crack in the tired old hull.

We want you to organise medical facilities for an aircraft carrier', they said to me. 'Create a diving team and read about clearing mines on beaches. Here's a camera, learn how to use it.'

I remember those weeks before the killing started as an adventure. A schoolboy dream come to life. One day I would be poring over the blueprints, the next I would be in the scrap yard with a team of sailors rescuing bits and bobs of useful equipment. Another time I had the bright idea of stringing field telephones between the bridge and my command posts in case enemy action cut the main power.

My father-in-law even joined in the folly.
'Here are the addresses of some very good business contacts, if you happen to pop ashore in Argentina.'

The night before we were due to sail, I received a phone call.

'Admiral's... er... press officer here.'
'Look, you're a bright young lad, first trip to sea. Its probably been a bit rough on you, new baby and all. Tell you what... how about we take you out on the town tonight? Get a few bevies inside you as a farewell? What do you say? Admiral has sanctioned this personally. He's paying.' 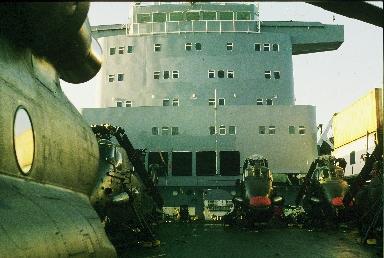 1BBC: On This Day