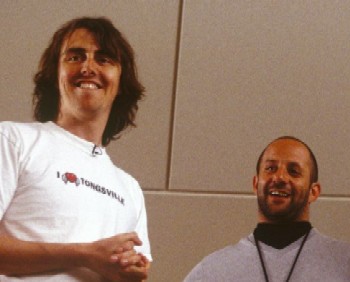 
1. "How much does this movie deviate from Douglas Adams' original ideas and ideals? How much was sacrificed for a better commercial success?"


GARTH: Douglas wrote the script that we’ve revised with Karey [Kirkpatrick] and it sticks to the original themes and ideas but has more plot structure and character arc than previous incarnations.


NICK: From what I have heard Douglas Adams approached each incarnation of Hitchhikers whether it be the TV show, book or games with a fresh take depending on the medium. The great thing with Hitchhikers is that as long as you understand the ethos behind it and where the humour is coming from, it allows you a lot of leeway within that.


2. How are you dealing with the overall narrative flow of the film in terms of traditional 3 act structure? Will the 3rd act be open ended towards continuing on to "Restaurant..." or will there be some sense of closure?

GARTH: Douglas had already solved most of the narrative problems by introducing a juicy 2nd act. Karey had helped make it very much Arthur's story and create room for all the weirdness to exist in a way that seems entirely logical and natural. Some of the original plot points have been given a little 'zing' in terms of action, conflict etc. but it's still a crazy and unique film and there are still times when the film throws its own narrative structure out the window and runs naked down the mountain screaming.

3. When adapting a book to film it's not so important to capture all the details, but to capture the heart and spirit of the source material. What, in your opinion, is the essence of the Hitchhiker’s Guide? What are the book and the film about?

GARTH: You're quite right. You can't capture all the detail. The film would be 10 years long. We've had to boil some elements down to their essence in order to make them work on screen (with some excellent results too) but I think the themes and ideas in the book are still just as prevalent in the film. And they are as topical as they were 20 years ago. Hitchhiker's always seemed like a surreal spin on life to me. Wherever you went in the universe you would always find creatures or situations that reflected the madness of a certain aspect of ordinary life on earth. Vogons aren't that different from men you might find asleep in the House of Commons or wearing a judge's wig. The President of the Galaxy shares many of our world leaders' characteristics, give or take the odd head or extra arm. And the themes that run through the story such as: As a race we take ourselves far too seriously, we're always worrying about things that don't matter and not noticing the extraordinary planet we've ended up on… They are wonderful themes to carry home from the cinema with you. And it's all in there. You'll find it next to the bowl of petunias and the whale coming to terms with its existence.

NICK: Wow, that sounds really good, where do I sign up.

4. What's the one thing from the story that you really wanted to include in the movie but couldn't?

GARTH: We see Zaphod stealing the Heart of Gold but I would love to have shown him skimming along in his boat on Damogran beforehand. Sam Rockwell would have loved doing that.

5. We know that there are loads of new ideas for the film, but out of the scenes that remain from the original radio series, which do they think will most surprise the fans?

GARTH: Most of the fans seem to find everything out way in advance so it's hard to keep things a surprise! Slartibartfast and the planet factory are turning out to be pretty wonderful elements in the film visually but still very much what you heard in the original series. The Vogons destroying Earth is as you heard it but with added mayhem and madness. I also think our take on Arthur and Ford in the Vogon airlock is a peach. I suppose the biggest surprise, judging by the amount of questions that crop up about him, will be how good Mos Def is at playing Ford and how funny his entrance into the film is.

NICK: I hope the planet factory will be the biggest surprise to the fans. I also think the Guide entries will have a big impact. They were so good and much loved from the TV series, that we had a lot to live up too. But the team at Shynola have done an amazing job, and it clearly stands out as something very new within the film.