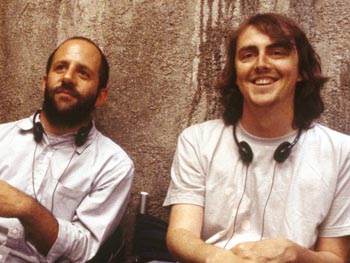 
GARTH: Zaphod has two heads. We’ve used some brilliant special effects to bring it to life and it looks wonderful. It’s definitely Zaphod but no paper Maché or eye patch.


NICK: One of my favourite moments of the film was trying out the first Zaphod 2nd head tests with Garth and a video camera. There was a big smile on everyones face when we showed the results, because it really worked! As far as filming it was concerned it was never going to be easy, however hard we tried, we ended up using 3 different techniques depending on the shot to create the effect.


2. Were the designs of Marvin, Deep Thought, the Heart of Gold, etc. made to exacting descriptions in Douglas's script, or are they all solely products of your vivid imaginations?


GARTH: We would always start by clarifying the concept of whatever it was we had to design before we drew anything, and Douglas always had amazing concepts. It’s very easy to design creatures and space ships and as a result, it can be difficult to design something that you haven’t seen before. We wanted it all to look amazing, but different from what we’ve come to expect from Sci-Fi. And it had to be in-keeping with the original concept. We’d carefully work out what part the creature/ship/thing played in the story, then we’d fill our mugs with PG Tips, pick up a pencil and go mental.


NICK: And in some cases that cup of PG tips was in itself an inspiration!


3. imdb.com mentions that Joby Talbot is doing the score for the film - can you describe how that's going, if it's adding an integral part to the film or just keeping itself alongside and not intruding on the film?

GARTH: I think Joby Talbot is the greatest composer in the world. Hearing him play me demos on his piano is one of the best bits of the job. He’s already been to Prague to record a temp score with a bloody huge orchestra. It was extraordinary stuff. I cannot wait to do it for real. You’ll love it. I’ll never forget asking him if he’d like to write the score for the movie. I said, “it’s the Hitchiker’s Guide to The Galaxy, do you know it?” “Know it?” he said. “The last 3 times I read the book, I read it out loud to my entire family!”


NICK: Joby has been amazing so far, we now like to get him along to whenever we decide a review a cut, because he always has so many ideas, without ever being intrusive. In a few areas of the film we have actually started with a score in my mind and then filmed or edited to that, so I would definitely say integral. Joby is also now working with Nigel Godrich on creating a specific sound of music for the Guide itself.


4. Aside from Ford Prefect, Zaphod Beeblebrox and Marvin the Paranoid Android, probably the most popular character in the HHG series is the narrator (aka “The Book”). Will the narrator’s presence be as prominent as in the books and radio series and, if so, how will his part be translated to the screen?

GARTH:The Guide voice will be peppered throughout the film and accompanied by animated sequences created by the mighty Shynola.


NICK: We went through a strange process during the editing of the film. In the begininning we found ourselves stripping out the Guide bits, because they were taking you out of the film, but as we went further, and began treating the Guide more like a character, they are now all going back in, and we find ourselves looking for more.

What differences can we expect to see regarding the characters both visually and psychologically that will expand from the radio show and novel to this newly updated version meant to appeal toward a more mainstream audience and why were they chosen? In short – how and why were characters altered from the original?

GARTH: In general, all the characters have been given more depth, especially Trillian, in order that we care about who they are and where they are going. Once you get the chemistry right between the characters, the rest of the madness falls into place. Even in the earliest test screenings the cast have been enchanting everyone and allowed us more freedom in other more peculiar areas. We haven’t had to change a character in order to make them appeal to a wider audience but we have had to add dimensions so that it’s a more fulfilling story.


NICK: We also have some new characters in the film which were invented by Douglas, mainly Humma Kavula. 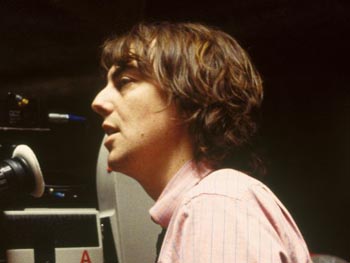