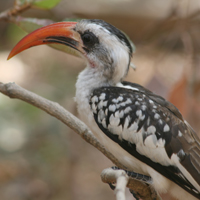 There are two unpleasant parts to going on holiday for me. The first
is getting there, and the second is getting back.

I live down in dere ol' Deb'n1, way down in the south-west of
England. It's quite a long way from anything. This is a good thing
in a way, because we tend to get bothered less down here, but it also
means that if we want to do something that the rest of the country
does, it takes a rather long time. We can't just hop on a bus and go
to a big sporting event, pop concert or exhibition, and going on
holiday takes an awfully long time. Rumours that motorised vehicles
will soon pass the horse and cart as the preferred method of
transportation down here have thus far proven unfounded, and big
international airports are a considerable distance away.

So it takes us almost as long to get to the airport as it does to fly
to our destination, and often longer.

This wouldn't be so bad, if flying was something I could look forward
to. It isn't. Part of my brain recognises that flying is entirely
safe and that accidents are very rare, but the other part still can't
quite get to grips with the fact that the plane manages to stay
in the air in the first place. At best, I'm a nervous flyer, trying
to ignore the reality of actually being on a plane; at worst, it's a
turbulent flight and I'm a wreck, trying to get sloshed on my
duty-free. That, however, is not the part which annoys me the
most.

What really irks me is that airlines have no class whatsoever these days.

The first flights I took as an adult were long-haul trips to Asia.
The first was perhaps a decade ago, and I was lucky enough to fly with
a Middle Eastern airline. The experience has blighted my view of air
travel ever since.

Back in the 1980s, air travel was glamorous. British TV viewers were
glued to the experiences of Alan Whicker as he trotted around the
globe in Whicker's world, young girls dreamed of being air
hostesses, and the sheer cost of flying meant that taking to the air
was a treat. Times have changed, of course; but even by the time I
took my first flights, they hadn't in the Middle East. The attitude
of the immaculately-dressed hostesses was completely different;
nothing was too much trouble. I could press a button and they would
smile and bring me another gin and tonic - all free, of course. A
complimentary pack was provided, with free headphones and a blindfold
and blanket so that I could have a snooze in comfort. The in-flight
entertainment was pretty good, and when the film ended, a little map
showed me exactly where I was, what speed I was doing and how high up
the plane was. I even got a choice of newspaper, and a couple of
boiled sweets for the descent. The airline recognised that any
longish flight is a fairly dull experience, and tried to make it as
pleasant as possible.

Fast-forward to 2008. I'm sitting in my cramped seat on a six-hour
flight to The Gambia, and a large part of me is wishing I was heading
for the Middle East instead. For a start, I'm on my own; my partner
is stuck halfway down the aisle, as the air hostesses won't move the
drinks trolley out of the way so she can get back to her seat. She
has to wait until they've finished serving, before she can return from
the loo. The film looks pretty rubbish, but I can't hear what's going
on anyway because the airline wants me to buy a pair of headphones
that fit nowhere in the world but in the armrest of a plane, and I
refuse to pay for such a worthless item. There's nothing to read
apart from a magazine that tells me nothing apart from how wonderful
the airline is, and I can only get a drink when it suits the cabin
staff. When I do get a drink, it's way overpriced - triple the price
I'd pay on the ground, in fact. It's all pretty poor.

Then one of the cabin staff comes onto the microphone. We're told in
a very 'schoolmistressy' tone that 'one of your number has been
smoking in the toilet', and there's little attempt to disguise the
anger in her voice as she scolds us for a few minutes. Whoever has
done it should be ashamed, as they are endangering the lives of
everyone on board, and she reminds those of us who are nervous about
flying that we're in a very heavy steel tube 30,000 feet up in the
air, and finally tells us that if we are caught smoking in the toilet,
we will have our return ticket cancelled.

Fine. I'd rather walk home anyway.

Now I'm no supporter of people who smoke on planes. I can happily
hang on for a few hours, and having a crafty one is unpleasant and
antisocial. There's no debating that. I have to ask, though, if it's
really worth a diatribe? I mean, if a cigarette could bring down a
plane, why are terrorists trying to sneak bombs on inside their shoes?
Why aren't they just throwing lit cigarettes down the toilets? And
why are people still allowed to bring them on board?

But what is more annoying is that this little episode confirms my
recent thoughts about flying. Passengers aren't really guests on
planes anymore; we're simply people who need shifting on and off with
as little inconvenience to the staff as possible. Moreover, the move
towards cheaper, no-frills flights has meant that the focus of the
airlines is now less on making the flight pleasurable, and more about
making money, even in-flight. As the little extras, such as the
boiled sweet for descent and the complimentary newspaper have gone, so
have the pleasantries. And I think it's time we demanded a little
more.

Take airline food, for example. You may think me uncharitable if I
was to mention how appalling the food was; after all, it has always
been so. The difference is that in the past it has been
complimentary, and because of that it has always been difficult to
complain about. We expect airline food to be poor. But if you
paid £7.50 in a local café for a small tray containing a small
piece of brown chicken, some unfathomable sauce and a bread roll,
you'd ask for your money back. You wouldn't be interested in the
problems they had in cooking it or the fact that they had to cater for
200 people all at once; you'd tell them that you weren't going to pay
for it. For some reason, we feel that paying that much on a plane is
different, and I don't entirely understand why.

What's worse is that the only 'complimentary' treat I got on the
flight was my cup of coffee immediately following the meal. I rather
cantankerously pointed out that it wasn't complimentary, as I'd paid
£7.50 for the meal.

Of course, like most people who have rose-tinted views of the past, I
paint a rather biased picture. Nothing was ever 'free' on planes,
it's just that the cost was hidden in the higher price you paid. The
beer, headphones, meal and comfort pack were never free; they were all
just included in a higher price. The real problem is that you can't
pay a little extra for the staff to show courtesy and politeness when
dealing with you.

I never thought I'd yearn for the olden days. They say this happens
when you pass 30.