Donington Park is the Mecca of British Motorcycle Racing. Uprite Racing’s usual racers, Dave and John, were joined by our new rider, Colm Watling. The bike itself had been on the Dyno again to give it more power and hopefully to sort our ongoing thirst problem. All seemed to be going well... perhaps too well...

John went out in free practice and returned to report a massive improvement in the tractability of the motor. Dave set a 1.23 in the first qualifying session, followed by Colm on 1.26 and finally John on 1.27. After a few adjustments, such as tightening the steering headraces, the bike was fuelled and ready to roll. The fuel consumption was still too high, so we were looking at a 6-stop race strategy.

Go! Having qualified fourth in class, Dave opened our account as usual by running across the track to the bike, held by our new rider Colm, and speeding off into position last-but-two; but remember that this is a tortoise and hare race.

Dave was soon fighting his way up through the pack and, once the tyres were warm, he cracked in a 1.20 lap. Unfortunately some evasive action at Mcleans corner resulted in a particularly hairy moment, losing us almost 10 seconds in one lap, but he soon composed himself and settled down to steady 1:22s.

With the team now in a healthy fifth position, Dave pitted and handed over to Colm. Refuelling went fine and Colm went to join the race. 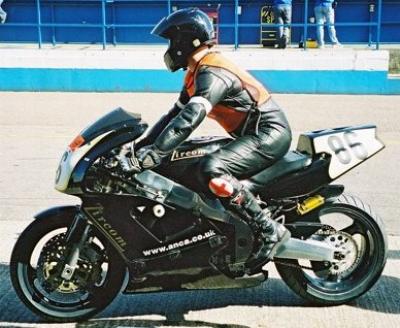 
Colm settled down to a steady pace of 1:25 and maintained our position. This was Colm's first ever road race, and quite a different experience from the super-motards he was more used to. The pace car came out several times as various teams crashed, and the sight of marshals sweeping up the debris was a bit of an eye-opener for him. Just before the hour was up the bike came in for re-fuelling and the handover to John. We were still in fifth place, two laps behind fourth.


John rejoined the race, but within eight laps he was back. The gearshift mechanism had come undone and the bolt holding it together had been lost. This had happened before during testing at Snetterton, but both Gresh and Phil thought that it had been rectified; while Andy topped up the fuel, they frantically searched the garage for a suitable replacement. Something was found and screwed in, and out went John again.

The lost bolt had cost the team dearly; almost three laps had been lost and our adversaries were pulling further away. Clearly this problem needed to be fixed for good before the next race. Meanwhile it was decided to run John for the full allowed seventy minutes to try and make up time, and so he did not come back in until approaching the halfway point in the race.


A change of tyres was required for both front and rear. Refuelled, pads checked and chain lubed, out when Dave. It had been threatening to rain all day with some very black clouds about, but Gresh and Max gambled on there being no rain for the following three hours. Dave's sticky rear tyre would give little grip in the wet, but was perfect in the dry. His times came down within five laps, and his steady 1:21 was bringing the bike back up through the pack. However, the missing bolt and the double tyre change meant that we had slipped back into seventh position, some six laps away from a podium place. At fifteen minutes to the hour, Dave came in for a slick sub-fifty-second pit stop; Colm took over and immediately set about bettering his previous times by two seconds a lap. 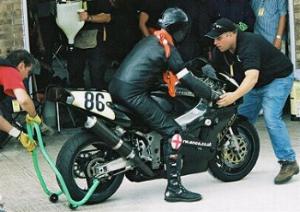 
Thanks to Dave and Colm's superb efforts, at the start of the hour the team had moved up into sixth place. Colm continued to do us proud, first overtaking our friends Blackcat Racing, and then passing Bulldog Racing's Triumph. By 4.45pm we had moved up into fifth place. An even quicker pit stop, and John was hot on the heels of UKRM and On-Line Racing. Almost immediately On-Line Racing pitted with a problem and didn't rejoin for some considerable time. Within the next two minutes, UKRM crashed and limped back to the pits to spend the next quarter of an hour on running repairs.


Meanwhile John was keeping everything smooth, moving up practically unnoticed into third place. At 5.30 the bike pitted for a splash-and-dash and left with Dave at the helm, settling down to a steady circulating pace. We had a one-lap advantage over Blackcat Racing who were laying fourth but who still had to pit, leaving us with a huge safety margin. After 233 laps and 456 miles Dave took the chequered flag and a podium position of third.

Gresham and Max felt that this was more important result than our second at Bishopscourt. We had come from behind, kept our nerve, and used the correct tactics for tyre choice and pit stops and, crucially, the riders had raised their game during the second half of the race and found those extra seconds per lap that put us on the podium.