Another meeting in Germany had been suggested, just 5 weeks after the one in Cologne. This time, the initial was that Tavaron was visiting Malabarista – who lives in Wuppertal, and for some of us this not very far away.

Happy to be able to meet some more hootooers plus some I already knew, I was looking forward to it. And since Sho was at least able to be around and bring her daughters, I had a happy child as well.

The meeting was arranged for 3.00pm. In Wuppertal-Oberbarmen, and not at the main station, which would have been closer to Malabarista's home. But this way we were able go some way with the Schwebebahn (Suspension Line) which certainly is an interesting thing to do. Instead of walking down the street, we were 'hanging' above the ground. This tram passes over the river Wupper and it is great to be able to see your surroundings from high above.

From the main station, where we got off, we passed a little through the city centre and went to Malabarista's home - not straight away because first she made us mount stairs (Wuppertal is not a flat city, but is going up- and downhill all the time). Finally we arrived at Mala's home - and luckily we had burnt some calories on our way there, because lovely cake and muffins as well as a pudding where there to be enjoyed.

The girls were fascinated by some middle age Armour and playthings, and soon they were busy disguising themselves as knight or lady. Later they were shown how to hold and fight with a sword (not a sharp one - they weren't in danger of getting hurt at any time).

We all enjoyed a lovely afternoon - and then we were invited to dinner, which Malabarista just conjured up in a short time.

I must admit, I never expected such a well equipped kitchen at a student's home. And the food was just delicious.

The bathroom was worth a look as well - we baptised it "the golden room".
Everyone who has lived in Germany during the late 1970s (or in the 1980s) knows how awfully tiles look that were used then – and what Malabarista has made of this room is really great, you don't notice the awful walls anymore.

Time went quickly – and a

day came to and end.

On the way back my daughter and I could share a train with Sho and her daughters, which made the journey nicer for us (not only because it was cheaper this way).

We arrived back home just before midnight - tired but happy.

Thank you all for a great day!

Hope we all manage to meet again, in the not so far future – and of course it would be great if others could take part as well. 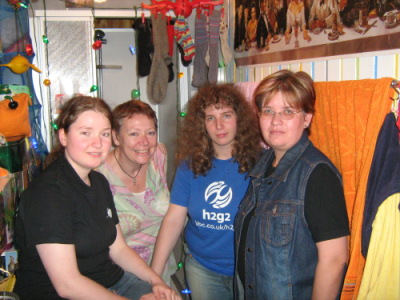