Saturday the 22nd of November 2003 dawned bright and clear in Dublin. As the sun rose, Irish Researchers were still in their beds snoring, but already moves were afoot for the big event of the decade, the First Official Irish Meet1. Already Researcher Genie was in the air, flying in from far-flung London to join us for the day.

For the rest of us, a more leisurely start to the day led to four researchers gathering at the National Gallery at 2:30pm. Recumbentman, Gnomon, Azara and Genie formed the core and the entirety of this group. Recumbentman gave us a demonstration of his PDQ recumbent bicycle, then we proceeded to visit the Gallery.

'Love Letters' is an exhibition of Dutch paintings dating mainly from the 17th Century. They show people communicating through the medium of hand-written letters. All the paintings show people either writing or reading letters. Some of the painting are pairs, one showing a man writing a letter and the other showing his lady reading the same letter. Some of these pairs had been split up for centuries and only recently identified as belonging together.

The skill and beauty of these paintings is incredible. But there is a certain sameness about them; they all treat the same subject, all take place in the bare Dutch interiors, all have similar furnishings with tiled stone floors, carpet draped across a table and elaborate curtains. Some artists go to town on the texture of the curtains and the dresses of the woman, producing work which is almost photographic in detail. Of course the end result is more beautiful than any photo.

The pride of the exhibition is three pictures by Vermeer, who is the acknowledged master of such scenes. Vermeer painted many pictures but only 34 survive today. The three here represent a sizable section of his remaining work.

After the exhibition, we proceeded to the coffee shop, where we made several attempts to contact Belfast researchers Lord Smooth and Big Chief Slippery Fish. They had arrived late at the gallery and had wandered around looking at the art while failing miserably to find us. (Lord Smooth was particularly impressed with The Opening of the Sixth Seal, a massive apocalyptic work by Francis Danby). Eventually we sorted out Smooth's mobile phone number and rang him, to find him sitting at a table about 15 feet from ours.

Big Chief Slippery Fish said hello and goodbye at this stage. He was suffering from the after-effects of an accident the previous evening involving broken glass and a bleeding hand. He wasn't feeling the best, so we wished him well and proceeded to...

Trinty College is the only college of the Dublin University, and is more than 400 years old. The head man of the University is called the Provost. One of the perks of the job is that you get to live in a massive house on the campus, opening onto Grafton Street and with the most exclusive address in Dublin: 1 Grafton St. Recumbentman had arranged a tour of the house for us; the Provost himself showed us around his home. John Hegarty is a quiet-spoken and unassuming man and it was very kind of him to show us around. Here we were joined by researcher Chaiwallah and Recumbentman's daughter, Aoife.

The Provost's House is an incredible piece of architecture dating from 1760, with massive reception rooms (the dining room was laid out for 25) and decorated throughout with works of art and antique clocks. Most of the artwork was donated to Trinity College over the centuries. The most important works are a collection of sixteen paintings by Jack B Yeats (brother to the poet William B), as well as one by their father, John B Yeats. There was also a beautiful cubist work by Mainie Jellett called Let There Be Light. This has pride of place over the fireplace in the Provost's Office. He thinks it is particularly appropriate because his own subject of research was lasers before he became Provost.

Upstairs in the house is the biggest reception room, the 'Saloon', with an ornate stuccoed ceiling, plain wood floor and pillared sections at each end. This room is the full width of the house and could hold a large number of guests. It was strange to look out the windows and see the crowds of shoppers on Grafton Street, and the newly-erected Christmas Tree.

Despite the grandeur of the place, the fact that this is the Provost's home was clear: his little dog followed us around, and his young son stuck his head in the door to say he was off to the Video Library to return some DVDs.

We thanked the Provost profusely and said our goodbyes. At this stage, Aoife left us and we proceeded to ... 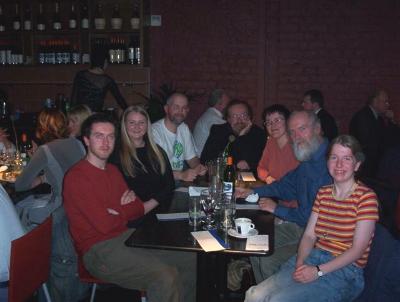 We found a good restaurant (Milano) on Dawson Street and indulged in a leisurely meal of pizzas. Here we were joined by American-Irish researcher Nora. A great time was had by all, the pizzas were good, the wine flowed and we talked about anything and everything, slagging off some h2g2 researchers, praising others, filling newer researchers in on some of the dramatic events in the history of the site and so on.

The evening was rounded off by a drinking session in Buswell's Hotel. Situated just across the road from Leinster House, the site of Ireland's government, this is famous for being the haunt of politicians, but it being Saturday, they were all at home, so we had the place virtually to ourselves. We were joined here by researcher Xanatic who is Danish but living in Dublin.

As promised in the plan for the day, Guinness was consumed in large quanitities, as well as other drinks. Genie broke the news that England had won the Rugby World Cup, which evinced warm congratulations from everyone.

All in all, a merry occasion and one to be repeated regularly.

1Not the first meet, but the first official2 one.2Official because Lord Smooth3 said so.3And he's a Lord.