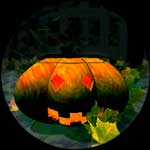 Halloween begins with a spooky opening sequence in which we look out from Michael's view, seeing his 17 year old sister Judy make love to her boyfriend. We see what he sees as he puts on his clown-mask, picks up a knife, go upstairs and kill his sister Judy Myers. It is when he leaves the house that we see the initial shock; that Michael is only a 7 year old boy.

Fifteen years later, in 1978, Doctor Loomis and a nurse travel to
where Michael has been kept in Smithsgrove Mental Institute. Michael escapes the institute, steals Doctor Loomis' car and escapes to Haddonfield, the town where he grew up. There he sees Laurie Strode outside the Myers' house, a house which Laurie's father, an estate agent, hopes to sell, and he follows her and her friends Annie and
Linda. On Halloween night, Laurie babysits Tommy, her friend Annie hopes to go on a date with Paul1 but instead babysits Lindsey until she takes her to Laurie, and
Linda is on a date with Bob.

Dr Loomis persuades Haddonfield's Sheriff Brackett, father of Annie, to keep an eye out around the Myers' House for Michael, but the sheriff is unconvinced.

Michael murders Laurie's friends and then pursues Laurie. Dr Loomis arrives in time to save Laurie, shoots Michael six times who falls off a balcony, but disappears...

Halloween is an effective film and the opening sequence of the flickering pumpkin builds up the atmosphere simply and more effectively than in later films. John Carpenter's3 haunting music, too, is fresh and, in the tradition of all horror films, the characters in this horror film watch horror films. The small cast also means that you know who everyone in the film is, and so the murders are more shocking than in later films with several disposable, and therefore disposed, extras. Dark and atmospheric, it took the films off in the right direction.

1Who we never see.2Characters with names in italics are recurring characters.3Director of
such films as 'The Fog', 'Escape From New York' 'The Thing'(1982) etc.