This has happened in previous episodes:


The young woman Aituár has fled her home village, accused of
being a witch. She is accompanied by the dragonling Déomarr,
who seems to have some kind of telepathic contact with
Licorne; a unicorn that helped Aituár find her way through a
cave system.


Having received a warning from Licorne, Aituár has in great
haste left the village where she had taken refuge, in the
company of Wotan - a bearded, one-eyed giant of a man, with
two ravens acting as his eyes and ears.


The night has been eventful; a blind man attacking Aituár
while werewolves were distracting Wotan, the little people
leading Aituár astray into a grave, the dark horseman showing
up again only to be defeated by the keeper of the grave, and
Wotan returning just in the nick of time to rescue Aituár
from meeting the same fate.


The light of dawn finds our travellers in an old abandoned
cottage, with Wotan barring the door from inside with the
mere weight of his body, and Aituár in restless sleep filled
with disturbing and foreboding dreams, Déomarr curled up
under her chin.

Aituár was awakened by something tickling her chin. As she opened
her eyes, she discovered that it was Déomarr's long thin tongue -
the dragonling was obviously hungry. Getting up, she was surprised
to see Wotan gone, but as she stepped outside, she found him
sitting on the porch with his two ravens, contemplating the
sunrise.

'Sit down, we need to talk' replied Wotan, without turning
his head.


Aituár sat down next to him and fed Déomarr some honey before
digging in her shoulder bag for the food that the monk Abraham had
sent with her. Sharing what was left of the bread, dried meat and
tomatoes with Wotan, she looked questioningly at him.


'Do you know anything about your parents, your origin?'
asked Wotan.


Aituár shook her head - the old couple that had brought her up had
found her at the edge of the corn fields of their village, and they
had not managed to find out where she had come from, despite asking
everyone who would happen to be travelling through the village.


'How old are you? When is our birthday?' Wotan asked next.

'I am 22', replied Aituár, 'but I am not sure of my exact
birthday - my foster parents thought I must have been just a few
days old when I was found, so they set the date 31 July as my
birthday. Why?' she asked as Wotan frowned at this.

'That means that if you are who me thinks you are, you will be
coming of age at the next new moon', said Wotan thoughtfully.

'You know who I am?' said Aituár. What do you mean,
coming of age?'

Instead of replying, Wotan suddenly looked up, listening intently
to something in the distance. With a sharp gesture he sent the
ravens flying, and turned to Aituár.

'Quick - we must get going! Soldiers are approaching!'

Aituár put Déomarr into the snake catcher's case, but discovered
that she could not close the lid, because the dragonling had been
growing so much lately. Instead, she crammed the case into her
shoulder bag, and tried to fit the leather collar on the very
reluctant dragonling. Déomarr soon stopped sulking though, as he
got to ride on Aituár's shoulder.


Aituár had to run to keep up with Wotan, who was leading the way
with big strides. By now she could hear someone approaching too -
the soldiers did not seem to bother about moving silently.


Wotan had left the path, and they were fighting their way through
the branches and undergrowth of the forest, when a broad river
suddenly barred their way.


'Climb up - I will carry you across on my shoulders' Wotan
said, bending down.


Hesitating only for a second, Aituár resolutely tied up her skirts
and clambered up. Wotan immediately set off into the vivid stream.

The water was growing deeper with every step, and soon it reached
up to Wotan's chin, but he seemed to be very sure on his feet and
continued wading steadily towards the other shore. Suddenly his two
ravens showed up, flying in small circles above his head, looking
for somewhere to land. Wotan held up his left arm, and the ravens
settled down on it. Heads close together, Wotan seemed to be
conferring with the two birds, before sending them off again.


'There are soldiers waiting for us on the other side of the
river too', he told Aituár, frowning.

'Oh no' she replied, 'where are we to go?'
'If we cannot go across the river, we will have to go along it.
Can you swim?' asked Wotan.

'Yes - but what about Déomarr?'

Wotan turned his head to look at the dragonling perched on Aituár's
shoulder.

'He can ride on my helmet - fasten his leash to one of the horns
to prevent him from falling off!'

Aituár did as she had been told, and then slid down from Wotan's
shoulders, into the ice cold water.

They did not have to swim much, only enough to keep their heads
above water, because the strong current was rapidly carrying them
down the river. Both Wotan and Aituár scanned the shores, but there
was no sign of life, not even of the ravens. 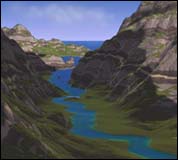 As they were being swept around a bend of the river, Aituár gasped
at the sight ahead of her.

A distant rumble had been heard for some time now, and as they were
swept past another bend, the noise abruptly turned into a mighty
roar. At first Aituár could not understand what it was, but then
she realized it was a waterfall - and they were heading straight at
it! She tried to swim towards the shore, but the cold water had
numbed her limbs, and the current was much too strong.


'Grab my hand' shouted Wotan, we are going down!

Reaching out, Aituár could feel his hand closing around hers in a
firm grip, and she tried to brace herself. As they were swept over
the edge of the waterfall, she could feel a lurch in her stomache,
and then they were falling freely. Everything became white around
her, and Aituár held back a scream, keeping her lips tightly shut.
Then everything went black.

Will they survive the waterfall?


If they do - then what will happen at the next new moon?


And why are the soldiers looking for Aituár?


Or are they really after Wotan?