The St Helens Fort Walk, Isle of Wight, UK Content from the guide to life, the universe and everything 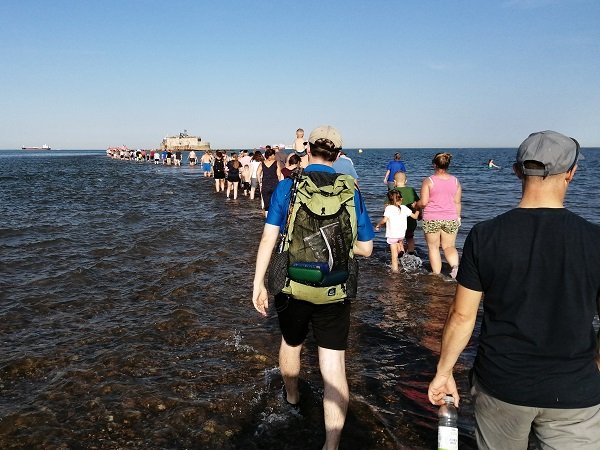 St Helens Fort is the smallest of four sea forts guarding the Solent, and the one closest to the Isle of Wight. It is about a mile off the village of St Helens and near the larger village of Bembridge. In 1864, during an arms race with France, work on building St Helens Fort began at the end of a submerged shingle spit east of Nodes Point. Each year 4-5,000 walkers undertake walking to the fort and back at the same time, making it the Isle of Wight's largest spontaneous, unorganised event.

It's the Fort that Counts 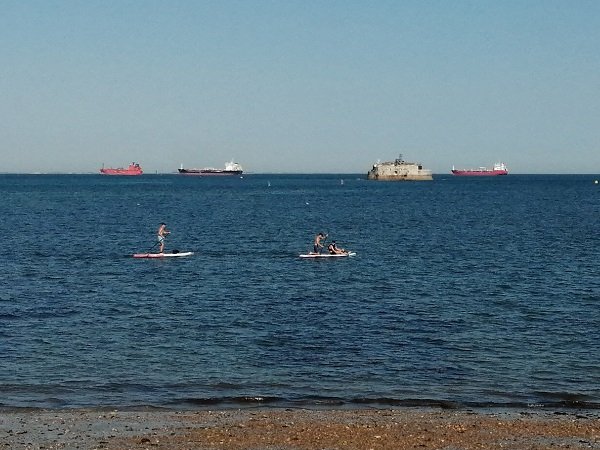 In recent years St Helens Fort has been the target for an annual pilgrimage1. There are four occasions each year, on the four lowest tides of the year, when the shingle spit that St Helens Fort is built on is predominantly above water. These are the lowest and second lowest Spring tides, usually in February (when the water can be freezing cold), and the lowest and second lowest tides in summer, usually at some point in August. As the lowest tide of the year has the ground around the fort dry for longer than the second lowest tide, the day of the lowest tide is the one popularly chosen by most of those wishing to make the journey, though some do it the following day instead. The route is passable for almost two hours, less for the second-lowest tides, and the walk from the beach to the fort and back takes about half an hour each way.

The walk started as a family tradition in the 1960s. Later it became something done by the Bembridge Sailing Club who started calling it the 'Bembridge Fort Walk', a name which, despite being inaccurate, has stuck, and the tradition has now grown beyond all recognition. The date of the event - if a spontaneous gathering of thousands of people knowing when the tide will be at its lowest can be called an 'event' - was previously spread by word-of-mouth. As no-one organises it and everyone makes their own way there independently, no-one is responsible for people participating.

Heading Into Helen Back 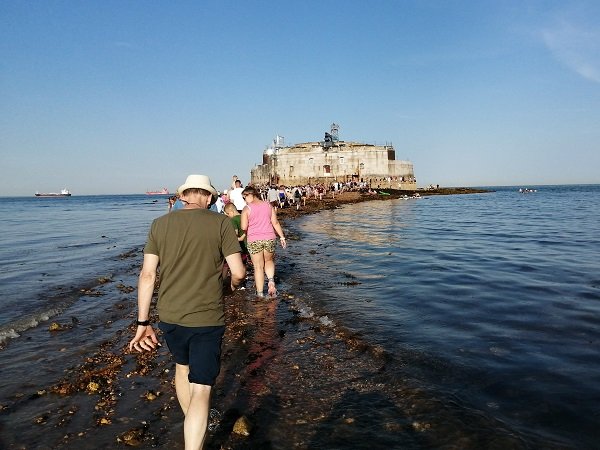 More recently it has become much easier to find out exactly when to plan the walk as the RNLI, the coastguard, the Isle of Wight Council and the National Trust all release statements discouraging people from taking part. They tell people the exact date and time when the tide will be at its lowest and, unable to stop an unorganised event from occurring, request that people do not do it. Despite being officially frowned upon, the Fort Walk remains the biggest unorganised gathering on the Isle of Wight. Each year thousands of people wade at the lowest tides of the year, which normally occurs in August, to St Helens Fort.

There are two routes to the fort: one from St Helens near St Helen's Church Tower, and one on the opposite side of Bembridge Harbour from Bembridge. The route from St Helens is the most popular. It involves walking from Nodes Point along a narrow shingle spit all the way. This is a shingle 'path' with numerous trip hazards, but is passable. This spit of land is normally well below water and consists of stones of various sizes, rockpools and occasional large rocks and boulders so walkers need to pay attention where they put their feet. If timed right, someone of average height is unlikely to walk in water higher than their knees. From Bembridge the route begins with a long sandbank but requires walkers to pass across the channel leading into Bembridge Harbour, and this dip will result in the water being waist height if timed correctly. From both locations the water will be higher if the walker's timing is off. 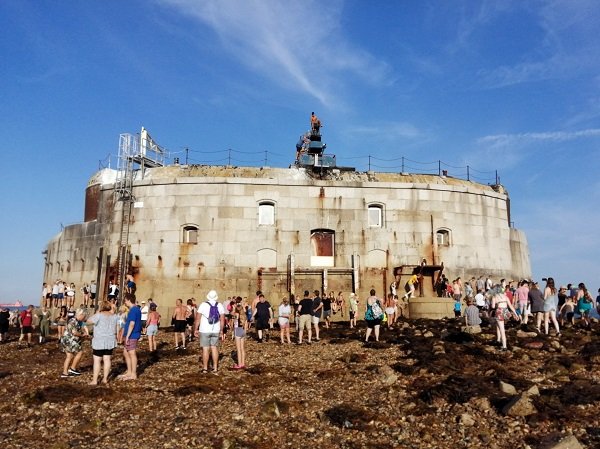 Early birds2 who attempt the walk as soon as the tide starts to drop can expect to walk at a pace of a few footsteps forward each minute, creeping ever-closer. It is recommended that walkers wear beach shoes designed for walking in seawater, which are also ideal in case of weaver fish. The depth of the water will probably be higher than a wellington boot. Saltwater can crack leather and 'rot' synthetic fibres, so ensure any shoes worn are thoroughly washed after. On arriving at the fort the tradition is to walk around the fort's raised base anti-clockwise once 'for luck'. The base is a concrete ledge that is wide enough to walk along but, as it is difficult to overtake anyone on it, anyone circumnavigating the fort should keep walking and not stop to admire the view, to avoid causing backlogs affecting people walking behind.

Nodes Point is adjacent to the 13th Century remains of St Helen's Tower, standing right against the sea. The Tower is the last remains of a church that had stood on the site since 704AD but had been all-but destroyed following coastal erosion. The remains of the tower were bricked up and painted white as a daymark seamark for Navy ships in 1719. The fort, like the church and village, is named after St Helen. She was the mother of Roman Emperor Constantine I, the first Christian Emperor and went from humble beginnings to marrying Emperor Constantius. She is credited with pilgrimages that located numerous relics such as the 'True Cross' and anything associated with Christianity kept in Imperial possession. Early Mediæval 'scholar' (storyteller) Geoffrey of Monmouth wrote that she was a British princess, which led to lots of churches across the country being consecrated in her honour. 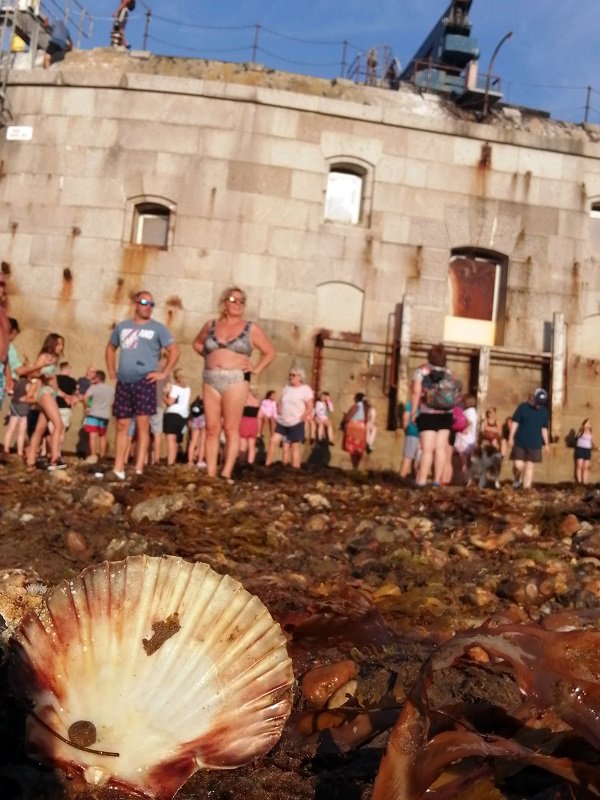 A typical council statement regarding this event is:

The St Helens Fort walk is an informal event with no organiser and anyone choosing to do the walk does so at their own risk. Do not put yourselves, volunteers and emergency services at risk. To anyone who is thinking about undertaking the walk, our advice to them is please stay away and enjoy one of the many safer beaches on the Island instead. If anyone is out and about please follow the advice to stay hydrated, safe and well.

If you are planning to participate, the Isle of Wight Council often closes the closest road to the fort, Duver Road, St Helens, with only residents and emergency vehicle allowed. In conjunction the National Trust's Duver car park is also extremely likely to be closed. On the day of the Fort Walk it is likely that there will be more coastguard people milling about on the beach than ever appeared in Baywatch.

I Fort The Law 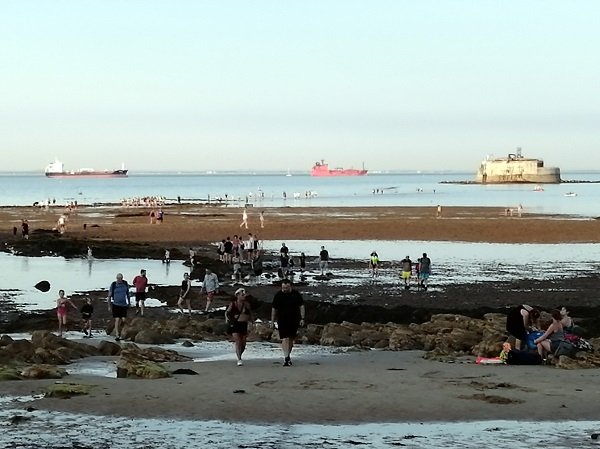 It is only possible to do the walk during a very short period on the lowest and second lowest tides in the summer. There are only about two hours in which it is possible to do the walk, which takes about an hour. Plan to arrive early, walk slow and steady, aim to be on your way back from the fort at the low tide mark when waters start to rise, while always watching your footing on the shingle to avoid tripping over rocks and lobsters, and be sensible.

If the weather is bad with storm, winds, fog, mist, choppy waves, strong currents etc the walk isn't safe and it should be postponed for a year. For very young children the walk isn't safe. Anyone who arrives 45 minutes late and thinks 'I can rush it and catch up' is wrong - they won't. They are likely to end up finding themselves neck deep in water and need to be rescued. Similarly, walkers should not attempt to climb up the fort and onto its roof.

It is important to respect mother nature and be aware of the risks. That said, the area is swarming with coastguard boats and the rescue helicopter. There is a RNLI lifeboat based nearby, at Bembridge Pier, with every move walkers make being followed by lifeguards. Yet that is no excuse for recklessness that could potentially endanger others. Ultimately the St Helens Fort Walk is a case of personal responsibility.

1A similar tradition is the Brambles Sandbank Cricket Match, an annual event that has happened since the 1950s. The Brambles Sandbank is only exposed for an hour in August at the lowest tide of the year, when members from the Island Sailing Club play cricket against the Royal Southern Yacht Club in Hamble in Hampshire.2Waders.