'Ferry Cross the Mersey' - a History of the Mersey Ferries Content from the guide to life, the universe and everything 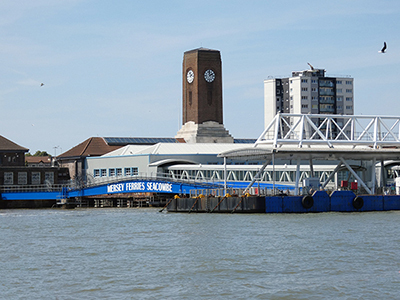 A ferry across the River Mersey in England has been operating since at least 1150. Although a ferry has been of less importance to people travelling between Liverpool and the Wirral Peninsula since the opening of the Mersey Tunnels, the Mersey Ferries still play an important role in the Merseyside region. The ferries were immortalised by the Mersey Beat band Gerry and the Pacemakers in 1964 with the release of the song1 'Ferry Cross the Mersey'.

The River Mersey was important to the first people who settled in the area, known as Neolithic Boat People - fishing and farming took place from around 4,000 BC. In the 12th Century, the monks of Birkenhead Priory became responsible for the first formal ferry across the Mersey. Monk's Ferry (as it was known) was granted a Royal Charter in 1330 and laid the foundations for what would become the Woodside to Pier Head route across the Mersey.

Wirral place names commemorate other ferry routes that existed in the past - for example Rock Ferry was established in the early 18th Century, and New Ferry in the late 18th Century. There are also several roads with 'Ferry' in their name.

The ferries grew in importance in the 19th Century when Liverpool became a city and port. The Wirral was a popular destination for holidaymakers. There were also many people who worked in Liverpool but lived on the Wirral side of the river. The ferries transported goods, people, vehicles, and animals (including the horses accompanying horse-drawn vehicles).

As the Mersey is a tidal river, it is exposed to various weather conditions that have tested the ferries over the years. A notable event occurred in 1878, when the ferry Gem collided with a sailing ship in thick fog. Several lives were lost as people jumped overboard in panic, even though the damage to the ferry was above the waterline so it did not sink. The ferries also saved lives on occasion - for example, the ferry Wasp rescued the crew of the Lottie Sleigh, a ship with a cargo of gunpowder, in 1864 after the vessel caught fire, and in 1899 the ferries Vigilant and Firefly rescued the crew and residents of the Clarence floating reform school when a fire was started on board.

Perhaps the most famous of the Mersey ferries are the Royal Daffodil and the Royal Iris, which entered service in 1906. In 1918, Daffodil and Iris, as they were then known, were requisitioned by the Royal Navy, covered in metal plating, and used to transport troops to the Belgian  port of Zeebrugge in an attempt to stop enemy U-Boats (submarines) from entering the English Channel. Although the mission was ultimately unsuccessful, the ferries were given the 'Royal' prefix by King George V in honour of their service.

As the traffic through the Mersey Tunnels increased, so the traffic on the ferries decreased. In 1947 the ferries that carried vehicles and freight were discontinued. In 1968, the operator of the ferry route from Woodside to Pier Head was merged with the operator of the route from Seacombe to Birkenhead (which had also received a Royal Charter in the 1330s). Mersey Ferries, as the merged operation was known, struggled during the 1970s and 1980s but avoided closure. In 1990 the ferries became a heritage attraction. A triangular commuter service taking 10 minutes to make the journey between Seacombe, Woodside and Pier Head was instituted, as well as river cruises following the same route in 50 minutes with audio commentary. The ferry terminals were turned into visitor centres where exhibitions could be housed. Attractions have included an aquarium (1992-2008), Spaceport (2005-19) and the U-Boat Story (2009+).

Further financial challenges arose in the 21st Century as the service was running at a loss and the ferries required more and more maintenance as they became older. Plans to use European Regional Development Funding to procure new ferries with more efficient engines stalled in 2021 because of the UK having officially left the European Union on 31 January, 2020. 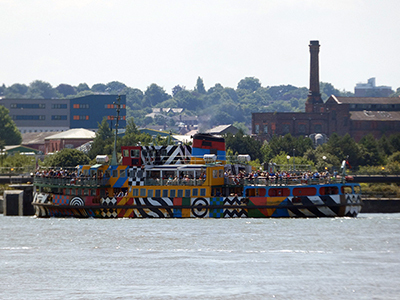 At time of writing (2022), there are two ferries in operation. Snowdrop started its life on the Mersey in 1960 - it was originally named Woodchurch but was renamed in 2004 after a refit. In 2015, Snowdrop was painted in bright colours and patterns in a 'Dazzle Ship' design. 'Dazzle Ships' were used in the First World War, as the patterns helped to camouflage the ships and make them less of a target for enemy vessels. The second ferry is Royal Iris of the Mersey - when it was named Mountwood, it featured in the 1964 film Ferry Cross the Mersey.

As well as the commuter service and the river cruises, the ferries take part in special events, such as birdwatching cruises and trips along the Manchester Ship Canal. They can also be hired for special occasions, such as wedding parties. Up to date information about journey times and prices is available on the Mersey Ferries Website.

1Written by the band's lead singer Gerry Marsden.2To distinguish it from the 1951 Royal Iris, which had been taken to London. There had been plans to turn the Royal Iris into a floating nightclub, but as of 2020 it was berthed on the River Thames in a derelict condition.