'I, Libertine': A Hoax, a Book, and a Few Observations Content from the guide to life, the universe and everything 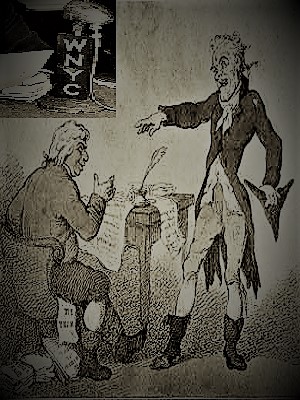 This is the story of a wholly remarkable book, though not a highly successful one. It is perhaps more whimsical than On the Road, which came from the same time period, but it didn't sell as well as Kerouac's opus. It has the advantage of being historically grounded and, best of all, based on a literary hoax. We shall tell you the tale.

There are only two kinds of people. Us and Them. And they don't know that we exist!
- Jean Shepherd1

Jean Shepherd was a New York City late-night radio personality who told rambling stories. He worked in his underwear because the radio station made him broadcast from the transmitter building in New Jersey so they could close the studio at night2 - it was hot, and he was sitting next to 50,000 watts. Shepherd was wildly imaginative and could talk for hours without a script.

'Let's all go to the local book stores tomorrow and ask for a book, that we, the Night People, know doesn't exist,' he suggested. The background to this idea was that New York City was a centre for book publishing. Shepherd believed that people tended to read the books touted by critics and 'experts', even if the only reason the books were being praised was that some publisher had too many copies on his hands and really wanted to sell them. So Shepherd and the Night People were going to create a buzz about a non-existent book.

Since this was a group prank, Shepherd asked for title suggestions. They settled on I, Libertine as a book that sounded both naughty and pretentious. The author, Frederick R Ewing, was of course an Englishman – a retired military officer with a wide knowledge of history and (of course) erotica. In fact, this expert often broadcast on the subject of erotica for the BBC. Ewing's wife Marjorie was an avid horsewoman, and they lived in Rhodesia, naturally. The book was published by Excelsior Press, an imprint of the University of Cambridge. Sounded plausible to a New Yorker.

The next day, the adventure began. Within hours, the Night People had results to report. A listener went into a bookshop with a particularly irritating clerk who was always going on about Proust. When he asked for I, Libertine, the haughty clerk exclaimed, 'It's about time the public discovered him!' Great was the satisfaction of the Night Person.

Bookstores all over New York were trying to order I, Libertine. A woman mentioned the book at her bridge party. Three women claimed to have read it, though two of them didn't like it. Airline pilots and flight attendants spread the word by requesting the book at shops they visited on international flights.

A well-known New York City newspaper columnist, who apparently got the joke, claimed in a column to have had lunch with 'Freddy Ewing' and his wife. A student at Rutgers University in New Jersey wrote a paper about I, Libertine and got a good grade plus the note 'superb research!'

The pièce de resistance came when I, Libertine, a non-existent book, was placed on the Proscribed List by the Archdiocese of Boston. Being 'banned in Boston' carried a scandalous cachet in the 1950s. Shepherd was beginning to worry that he had created a monster.

Finally, the pranksters allowed the Wall Street Journal to reveal the truth about the book hoax. Pretentious people now pretended they'd known all along. The international press had a laugh about the 'clever hoax', but Shepherd said they'd all missed the point. Reality was a lot more fragile than they realised. We, who live in the Fake News Era, can confirm.

The I, Libertine hoax was fun while it lasted, but more was yet to come. Shortly after the story broke in the Wall Street Journal, Jean Shepherd happened to have lunch with science fiction writer Theodore Sturgeon. Sturgeon told Shepherd that the publisher Ian Ballantine was madly trying to secure the paperback rights to I, Libertine. Perhaps they should talk? And a book was born.

I found him in the churchyard on his four bones, pulling weeds. He was a saint-faced youngster with eyes all watery from years of staring at irregular Hebrew verbs.
- Theodore Sturgeon, I, Libertine

Theodore Sturgeon was hired to write I, Libertine. Instead of a silly romance parody or semi-pornographic romp, Sturgeon turned the novel into a story based on real history – the marital scandals of Elizabeth Chudleigh, Duchess of Kingston. Elizabeth Chudleigh led one of those 18th-century lives that have inspired romance novelists for more than a century. Sturgeon's novel is full of laughs, but the reader will also learn strange new words like 'jactitation'.

Here are a couple of quotes:

Down the steps came the fair Miss Axelrood, little feet atwinkle and her hoops held high.

Now it has been recorded that all of this young man's teeth were beautiful, but that one of them was extraordinary. It was the right upper incisor...

Sturgeon wrote like a demon to meet the 30-day deadline. At last, exhausted, he crashed on the Ballantines' sofa while Ian Ballantine's wife Betty typed out the ending. One can detect a bit of tenderness in the final scenes that was previously missing. Perhaps Betty Ballantine was more kindly disposed toward the characters? At any rate, the book will remind more than one reader of the works of Henry Fielding.

I, Libertine's proceeds went to charity. The book, which came out simultaneously in hardcover and paperback, has a cover illustration showing the 'Fish and Staff' tavern – a reference to Sturgeon and Shepherd. The coach door reads 'Excelsior'. The cover text touts the novel as 'Turbulent! Turgid! Tempestuous!' It was all a fan could wish. 130,000 copies were sold.

Today, I, Libertine is out of print. Original copies are very expensive. However, the Kindle edition is quite reasonably priced and can be enjoyed by the digital generation. But it's better if you know the story of how the book came to be.

1Speaking about 'I, Libertine' on the 'Long John Nebel Show', January 1968.2As recounted in Eugene Bergmann's biography Excelsior, You Fathead: The Art and Enigma of Jean Shepherd, 2005.