Roald Dahl Films: 1960-1979 Content from the guide to life, the universe and everything 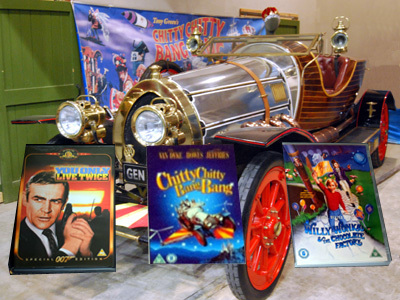 Roald Dahl (1916-90) is a British novelist best known for being one of the world's most popular 20th Century children's authors. During much of his lifetime he was better known for writing dark, horror short stories – many of which were adapted into his horror television series Roald Dahl's Tales of the Unexpected (1979-88) - yet today this has been eclipsed and he is remembered almost exclusively for his children's fiction novels. He has been voted by the public in a television poll as the greatest storyteller of all time. His work has been translated into 65 different languages and his books are among the world's best-selling of all time.

While rightly praised for his imagination and story writing, he has also been accused of having strong, anti-Semitic views1. He is also accused of using other racial and cultural stereotypes in much of his work, subconsciously and otherwise.

Before 1980 Roald Dahl had yet to have a huge impact on children's fiction, having only published a few of his best-known novels:

Instead, his biggest contribution to film involved writing screen adaptations, although not all of his film scripts made it to the screen. One that did, but has largely disappeared without trace, was his adaptation of novel Nest in a Fallen Tree (1967) by Joy Cowley, that was adapted as The Road Builder, also known in America as The Night Digger (1971). He also had one of his short stories adapted for the screen; 36 Hours (1965), based on his 1944 short story 'Beware of the Dog'. Neither of these little-known films had a lasting impact.

During the Second World War, Roald Dahl, then a lieutenant in the Royal Air Force, wrote a story provisionally entitled Gremlin Lore, later abbreviated to simply Gremlins, which in July 1942 arrived on the desk of Walt Disney. Gremlins were fictional creatures invented by RAF pilots in the 1920s who were said to cause aircraft to malfunction. Disney had been sent the unpublished story by Sidney Bernstein, head of the British Information Service, on condition that the British Air Ministry had final script approval, with royalties to be divided with the RAF Benevolent Fund.

Disney was initially delighted with the idea, which involved gremlins initially sabotaging aircraft but later helping repair aircraft in order to help the fight against Hitler, and invited Dahl to his studio that November. Sadly the project stalled when the gremlins' appearance could not be agreed upon, with Disney uncertain whether they should be animated or live action, and that the film was potentially sinister if the gremlins were endangering people's lives. It was also unclear whether Disney would own the copyright to the characters.

The gremlins will not be made as a feature because of the feeling on the distributor's part that the public has become tired of so many war films.

By then the Walt Disney Studio was in severe financial difficulty following making Pinocchio (1940), Fantasia (1940), Dumbo (1941) and Bambi (1942) at the same time – yet on initial release with the key European market cut off by war, only Dumbo made a profit. Struggling to stay afloat, particularly after a three-month strike by the Screen Cartoonists Guild in 1941, their next releases were cheaply-made package films or half-finished stories hastily combined together, such as Fun and Fancy Free (1947) and The Adventures of Ichabod and Mr Toad (1949). Disney were not to make another full-length animated film with one coherent story until Cinderella (1950), so it is doubtful whether Disney could have afforded to have made Gremlins in any case, though they did consider whether the story would work as a short.

Roald Dahl used the story idea for his very first novel, The Gremlins (1943). As Dahl did not create the concept of gremlins, the creatures have since been filmed in unrelated projects, notably the 'Nightmare at 20,000 Feet' episode of The Twilight Zone, re-filmed in 1983's Twilight Zone: The Movie, and Joe Dante's 1984 film and 1990 sequel.

This, the fifth Bond film takes only the title, some characters and the Japanese setting from the 11th Bond novel and is memorable for the first full appearance of Blofeld. The character of Dr Evil in the James Bond spoof Austin Powers trilogy is clearly modelled on Pleasence's definitive Blofeld. This is also the only film to date in which Bond does not drive a car. The film is also among the most offensive Bond films due to racial stereotyping and limited portrayal of women.

The script was written by Roald Dahl mainly on the basis that he was a friend of Ian Fleming, despite his not having written a complete film script before. He was told that the script had to involve three women for Bond to seduce – an ally and a villainess who would both die, and the main Bond girl. Dahl otherwise felt that Fleming's novel had the weakest plot of all the Bond books and, as he had to write the script in six weeks, decided the only way forward would be to combine the story of first Bond film Dr No (1962) with a Japanese setting. You Only Live Twice's plot would later inspire the film The Spy Who Loved Me (1977). Curiously, this was Roald Dahl's favourite film adaptation of his work, largely because he did not rate the original story particularly highly.

Following the unprecedented success of Disney's Mary Poppins (1964), Bond-film producer Cubby Broccoli decided to cash in and make something similar. James Bond author Ian Fleming had written Chitty Chitty Bang Bang as a series of bedtime stories for his son and these were published posthumously. Broccoli, who owned the film rights, approached Roald Dahl to adapt it into a film that would be as similar to Mary Poppins as possible. Julie Andrews was asked to star. Andrews felt the role of Truly Scrumptious lacked interest and was too similar to what she had already achieved when playing Mary Poppins, and so declined. Dick van Dyke signed a contract with United Artists to star, reportedly insisting on the condition that he would be able to use his own voice and not attempt the Australian-Irish squelching noise he had used for Mary Poppins, that has resulted in non-stop derision ever since. The Sherman brothers agreed to write the songs, resulting in an Oscar-nomination for the title song. That said, many of the songs have strong similarities with their earlier work from Mary Poppins. The choreographers and musical arrangers from Mary Poppins were also headhunted.

Dahl created new elements for this story, inventing Truly Scrumptious, the whole story of Vulgaria and the memorable character of the Child Catcher who, despite his brief screen time, dominates the film and has been classed as one of the greatest film villains of the 20th Century. That said, there is no denying that the Vulgarian section is highly reliant on extreme German stereotyping. Having controversial 'comedian' Benny Hill, who built his career on sexism and smut, come from Vulgaria does seem quite appropriate.

Baron Bomburst's castle is Neuschwanstein, one of the inspirations for the fantasy Disney Castle, although all the courtyard scenes were filmed at Pinewood Studios. Kinetic sculptor Rowland Emett was credited as creating the Heath Robinsonesque inventions Caractacus had around the windmill where he lived.

Sadly Chitty Chitty Bang Bang bombed4 on initial release, probably because it is among the longest children's films of all time. It has since become regarded as a classic and has inspired a stage adaptation.

The film against which all Roald Dahl adaptations are measured – being selected by the Library of Congress as being among the films they consider 'culturally, historically or aesthetically significant' - was made mainly to advertise chocolate. The Quaker Oats Company owned the rights to the Willy Wonka Candy Company brand name5, which is why the film is titled Willy Wonka & the Chocolate Factory, rather than the novel's Charlie and the Chocolate Factory. They made this film on a tight budget, with Gene Wilder the only big-name actor, and filmed it in Munich for budgetary reasons, which also gave the film an otherworldly look.

Despite being essentially a glorified advert that originally made a modest profit, the film has gained a cult reputation for its stunning visuals combined with an Oscar-nominated soundtrack. Although having a limited viewing on original release, it has since gained in reputation after finding an audience on television and home media.

Roald Dahl is credited as having written the screenplay but in reality this was heavily re-written by David Seltzer, who claimed that this was because Dahl had not finished the screenplay on time. Changes made to the story include Charlie's father having died to better portray both Grandpa Joe and especially Willy Wonka himself as father-figures.

Nut-shelling squirrels are replaced with geese that lay golden chocolate Easter eggs, the great glass elevator is renamed the Wonkavator and a villain is introduced to the story in the form of rival chocolatier Slugworth. The biggest and most inexplicable change is that Charlie and Grandpa Joe break Wonka's rules. In the novel all the other children break Wonka's rules and do or eat something they shouldn't and are punished, leaving Charlie the only obedient, good child. In the film Charlie too sneakily disobeys, and following the urging of Grandpa Joe drinks a fizzy lifting drink that threatens to endanger them by making them fly into a rotating fan - until they burp to stop flying6, which leads Wonka to doubt Charlie's integrity. This scene feels at odds with all preceding scenes in the film where Grandpa Joe and Charlie had been quick to criticise anyone who disobeyed Wonka's wishes.

These changes made Roald Dahl disown the film and he later refused to sell the screen rights to his sequel, Charlie and the Great Glass Elevator, written the following year.

1Dahl certainly condemned Israel's actions in the First Lebanon War (1982) and used negative Jewish - among other - stereotypes in some of his works of fiction.2Acclaimed director of the 20th Century's greatest children's novel adaptation, The Railway Children (1970), which is credited as being a major influence in creating Britain's steam heritage and restoration movement.3A virtually identical 'girl in love sits on swing and sings song' scene appears in another Sherman brothers' musical, The Slipper and the Rose (1976). Both were inspired by 'The Swing', a painting by Jean-Honoré Fragonard.4Or possibly bang banged – in any event, it failed to recoup its production budget.5They sold it soon afterwards to Subline Inc, who then sold it to Rowntree, who are now owned by Nestlé.6Similar to how The BFG features a drink that makes those who consume it fly by breaking wind.