The Ever-Popular Northern Cardinal Content from the guide to life, the universe and everything 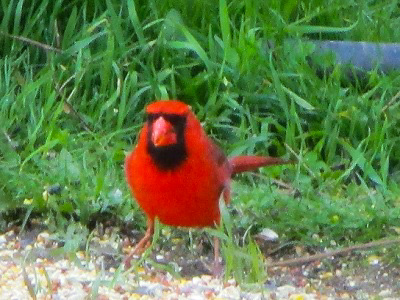 When a cardinal appears in your yard, it's a visitor from Heaven.
– Old Saying

They're bright red. They're sassy. They eat seeds. North American children sometimes think the Catholic Church named a prelate after them. The Northern Cardinal is a very visible and welcome visitor to North American bird feeders. They feature on tea towels and Christmas cards. Cardinals are so popular that the red-feathered songbird is the state bird of seven US states and has a baseball team named after it1.

Actually, only the male cardinal is bright red. The female is a warm-tinged brown. She's a really loud singer, even while sitting on her nest. Male and female cardinals call to each other frequently. Your backyard can get cheerfully noisy when they're around. Away from the feeder, they're hard to find: they like to hide in dense bushes.

The cardinal has a broad range. You can find them anywhere in the eastern to midwestern US, north into southeastern Canada, and south into Mexico as far as the Yucatan peninsula. They brighten up winter days and stay around all year. They'll live in suburbs, city parks, swamps and deserts. As long as there are thick bushes to nest in, they're happy. Bird feeders with lots of their favourite sunflower seeds have broadened their range in recent years.

Although they love the sunflower seeds, cardinals will eat lots of different things. They eat insects, snails, a wide variety of seeds, and berries. They mostly feed their young with insects. You'll see them hopping around the ground, eyeing the selection.

Cardinal nests have 3-5 eggs. Nestlings will mature in 9-11 days, leaving the parents ready to raise more – usually 2-3 broods per year. Both males and females feed the young.

Both male and female cardinals are fiercely protective. Male cardinals can be very aggressive toward rivals during mating season. They've been known to attack mirrors ferociously to defend their territory against an imaginary intruder. Leaving your car's side mirrors unprotected is ill-advised: a male cardinal, the original Angry Bird, may not leave it alone until serious damage is done. After you've secured your annoying reflective surfaces, though, you can sit back and enjoy this colourful, vocal visitor.

The male Northern Cardinal is perhaps responsible for getting more people to open up a field guide than any other bird.
- Cornell Lab of Ornithology