How to Deal with a Skunk Content from the guide to life, the universe and everything 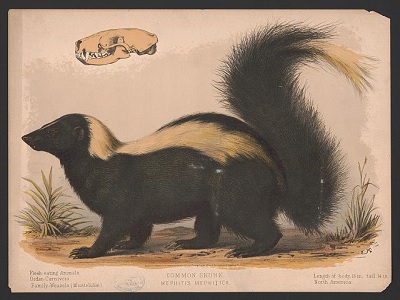 The skunk: Mephitis mephitis and its cousins. They're cute, they're smelly, and they've been scaring people in the Americas since time immemorial. One of the first Europeans to encounter a skunk was a Jesuit priest, Paul le Jeune, who described the creature thus in 1634:

The other is a low animal, about the size of a little dog or cat. I mention it here, not on account of its excellence, but to make of it a symbol of sin. I have seen three or four of them. It has black fur, quite beautiful and shining; and has upon its back two perfectly white stripes, which join near the neck and tail, making an oval which adds greatly to their grace. The tail is bushy and well furnished with hair, like the tail of a Fox; it carries it curled back like that of a Squirrel. It is more white than black; and, at the first glance, you would say, especially when it walks, that it ought to be called Jupiter's little dog. But it is so stinking, and casts so foul an odor, that it is unworthy of being called the dog of Pluto. No sewer ever smelled so bad. I would not have believed it if I had not smelled it myself. Your heart almost fails you when you approach the animal; two have been killed in our court, and several days afterward there was such a dreadful odor throughout our house that we could not endure it. I believe the sin smelled by sainte Catherine de Sienne must have had the same vile odor.
- Jesuit Relations

There are several misapprehensions about skunks out there which we would like to clear up. Read on for helpful advice as to what to do when you encounter Father le Jeune's 'dog of Pluto'1.

What To Do If You See a Skunk

What to Do If You or Your Dog Has Been Skunked

Do not despair. No, that smell won't go away by itself. But chemical help is available, courtesy of the US government and its pamphlets.

First of all, don't touch anything in your house. You'll just spread the noxious substances around.

Next, let us advise against that popular home remedy, tomato juice. It doesn't work. Soap and water won't work, either. Contact with water just makes thiols worse. Here's your best bet: fight chemistry with chemistry. You will need:

Mix these ingredients gently. Don't make bubbles. (It's exothermic.) Wash the exposed parts of you and your dog. Don't get this in your eyes or mouth. Don't leave it on your hair or the dog's fur too long unless you want a bleach job.

Resolve to give skunks their space in future. They are beneficial animals who eat vermin.

Read up on striped skunks, courtesy of the US Fish and Wildlife Service.

Image Courtesy of Library of Congress

1If you meet a smelly weasel in Southeast Asia, it's probably a ferret badger.