Snowbird: The Dark-eyed Junco, a Winter Visitor Content from the guide to life, the universe and everything 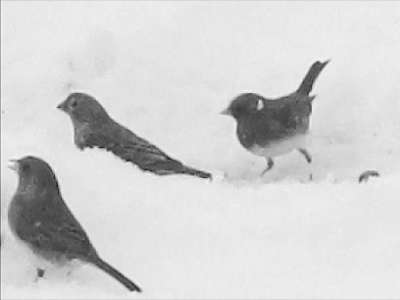 It's snowing heavily. The fat, white flakes are piling up. You look over at your bird feeder, which is rapidly collecting a mound of snow. A flock of very active little birds are gathering. They're black on top and white underneath. From their short, stout beaks, they're obviously seed-eaters. You've got questions.

What Am I Looking At?

It's a Dark-eyed Junco. This means, incidentally, that you're in North America. They're everywhere on the continent, although where exactly depends on the time of year. If it's winter, and snowing, you're mostly likely to be looking at adult males, like the ones in the photo. The males don't go as far south as the females. While the females are basking in warmer temperatures in winter, the males don't want to stray too far from their favourite breeding grounds. They want a head start on spring mating season and a chance at the choice territories. This is why you'll see the males twitching their white tails around your snowy bird feeder.

What Kind of Bird Is a Junco, Anyway?

A Dark-eyed Junco is a kind of sparrow. It's less flashy than the Eastern Towhee, being grey on top and white underneath. There are other colours: in the Far West, male 'Oregon' Juncos have brown hoods and a light brown body, but still have a white belly like the grey ones in the photo (which are from the eastern US). Females are brown. The birds are 5.5-6.3 inches (14-16 cm) long, weigh 0.6-1.1 ounces (18-30 g), and have wingspans of 7.1-9.8 inches (18-25 cm). They like to hop around on the ground, in low bushes, or under trees, looking for seeds and flashing their white tailfeathers. Their bills are pink.

Juncos have a twittering call and often talk to each other as they gather around bird feeders. They don't really like to share, but they'll tolerate each other and other sparrows, including the goldfinch.

How Do I Attract Them?

Put out sunflower seeds and hang suet. They love both foods. Spread some seeds around under the bird feeders. They will hop around and eat the seeds off the ground.

What Are the Chances of Seeing Them?

In North America, the chances are very good. There are an estimated 630 million Juncos.

Juncos are called 'snowbirds' because many people start seeing them when snow arrives. They're moving into the inhabited low country from mountains or farther north. People who do a similar thing – move to a warmer climate in winter – can also be called 'snowbirds'.