The American Goldfinch: Wild Canary in Your Backyard Content from the guide to life, the universe and everything 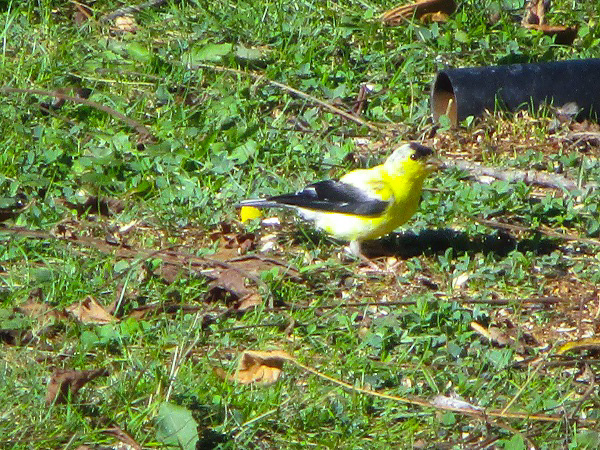 He's bright yellow and black. Often referred to as a 'wild canary'. Ornithologists claim his flight call sounds like po-ta-to-chip. In the winter, you may think he's gone away, but he's just wearing his winter coat. We are talking about the American goldfinch, Spinus tristis1, a passerine2 songbird found throughout North America. Goldfinches like anywhere except a deep forest, so you're likely to find them at your bird feeder – especially if you put out thistles or sunflower seeds.

How to Spot a Goldfinch

In spring and summer, the breeding male goldfinch is bright, bright yellow. His cap is black, and his wings are black with white markings. He has patches of white above and below his tail. You can't miss him, especially when he hangs out with the sparrows. He'll also flock with Pine Siskins and Common Redpolls. Females are a duller colour – they don't want to attract attention: they have nests. They're olive above and pale yellow below.

In winter, both male and female goldfinches turn a dull light brown, though their wings are still black streaked with white. During transitional periods, their patchy feathers cause alarm in concerned backyard birdwatchers, but not to panic: it's just the birds changing clothes. Moulting is the technical term. They do this twice a year. Goldfinches are small, weighing on average 11-20g (0.39-0.71 ounces) and reaching wingspans of 19-22cm (7.5-8.7 inches).

Male birds perch in trees and call loudly. Or they call in flight. Birdwatchers can spot them easily in open fields, especially near thistles. They can spot each other, too: paired goldfinches synch-up their calls so they can identify each other in flight. Communication is a good thing.

Diet and Nesting and Such

Goldfinches nest later than other birds. They wait for the seeds to show up in abundance. They also incorporate milkweed and thistle into their nests. Goldfinches are strict vegans: if they swallow a bug, it's by accident3. For this reason, the Brown-Headed Cowbird, a notorious nest parasite, is out of luck with goldfinches. It may lay an egg in a goldfinch nest, but its offspring won't survive on the goldfinch's all-seed diet. Goldfinches actually benefit from having humans around, because humans plant things. More seeds for them.

Goldfinches have two calls while nesting: one is to call other goldfinches to the nest to help protect it. The other, directed at the baby birds, tells them to crouch down and be less conspicuous to predators. Baby birds hatch from an egg the size of a peanut, after 11-14 days. They stay in the nest for a couple of weeks, being fed regurgitated seeds by the female. Once they start flying, the male will help feed them for another three weeks. They'll stay dull brown, so as not to attract attention.

Finches fly south in the winter, but the weather doesn't have to be tropical. They're okay if the temperature doesn't get below 0°F (−17°C). The goldfinch is popular, being the state bird of New Jersey, Iowa, and Washington in the United States. It's popular in Canada, too, where it might be called Chardonneret jaune, and in Mexico, where its name is Jilguero Yanqui (Yankee goldfinch).

1No relation to the European goldfinch, Carduelis carduelis carduelis.2Passerine birds have feet adapted for perching on tree limbs.3This is what Cornell's bird lab says, and we believe them. But see this online post for a thoroughly nuanced discussion of goldfinch feeding habits.