The Grey Catbird: Imaginative Singer of the Bushes Content from the guide to life, the universe and everything 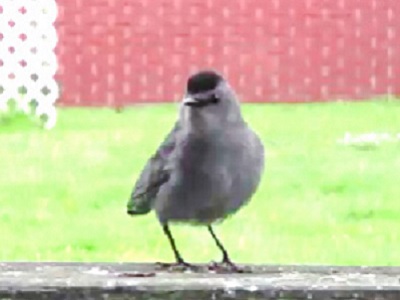 To clear one thing up right away: 'sitting in the catbird seat' means being in an advantageous position. That's because some catbirds1 like to perch up high. Today, we're talking about the grey catbird, Dumetella carolinensis, also called the slate-coloured mockingbird, which prefers to hide in shrubs and bushes. From there he sends out his long and imaginative call, which includes catlike noises. Unlike the northern mockingbird, he doesn't repeat himself. His call means, 'listen: I shall say this only once.' The song can last as long as ten minutes. 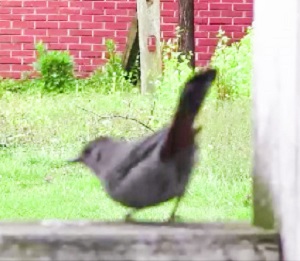 Grey catbirds like to eat berries, and also bugs. They'll eat mealworms, earthworms, and beetles, among others. They are feisty: they will attack predators. They'll also scare them away by flashing their tails and wings and making cat noises.

Grey catbirds are protective breeders, too. Unlike other birds, they aren't easily victimised by cowbirds, a common brood parasite. A grey catbird will memorise the colour and pattern of the first egg in its nest and throw out any that don't match. This is a learned behaviour.

Except for the rare instances where the cowbird got an egg into the nest first, that means the catbird will keep all its own blue eggs and throw away the cowbird's speckled ones. This strategy must be successful: the grey catbird isn't threatened in most of its habitat (with the exception of Bermuda). Grey catbirds can live a long time. The record so far is 17 years.

How to Find One, and How to Attract One 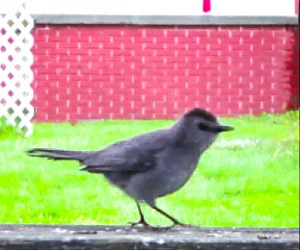 Look for the grey catbird in North America, of course. Try a thicket or thick bush. They'll be hiding in there, and fairly well-camouflaged.

Entice them to your feeding station with ripe berries. Plant berry shrubs and trees such as dogwood, winterberry, or serviceberry. If you suspect one is in the neighbourhood, make a 'pishing' sound – so say the ornithologists, who are good at naming sounds. They'll come to investigate. (The catbirds, not the ornithologists.)

1Many different, unrelated birds are called 'catbirds' because humans think their calls sound like cat noises. The cats aren't usually fooled. We do not know what this says about humans.