The Unending Appetite of the Canopener Bridge: A Trucker Tale Content from the guide to life, the universe and everything 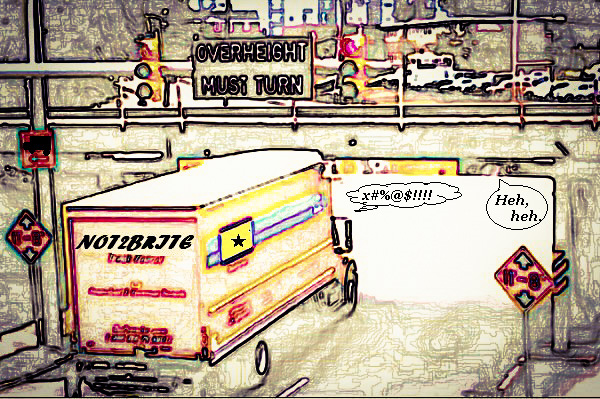 It's a normal day on Gregson Street in Durham, North Carolina. Cars are driving past the office of Jürgen Henn, an IT professional whose office is near the railway trestle bridge that runs over the two-lane, one-way street. There is the usual sound of motors passing, then stopping at the intersection of South Gregson and West Peabody streets.
Suddenly, the calm is shattered by a loud crash, followed by cursing (from the driver) and laughing (by pedestrians).
Jürgen Henn chuckles. 'I guess it's time to check the cameras,' he thinks.
The Canopener Bridge has claimed another victim.

Answer: When it's low enough to remove the lids of box trucks.

A 'box truck' is what people in the United States call a removal lorry. These trucks are large, tall, with a cab chassis and a container behind. They're also called cube trucks, cube vans, box vans, or rolling toasters. Many, many are rented daily in the country for hauling freight and personal goods. Box trucks are the Canopener Bridge's prey of choice.

The Canopener Bridge's official name is the Norfolk Southern–Gregson Street Overpass. It's an approximately 100-year-old railway trestle that runs over South Gregson Street. The problem with this bridge is that it is only 11 feet 8 inches (3.5 metres) high. Box trucks can run up to 4 metres and a bit, which means that they don't fit under the bridge. Inattentive drivers who attempt the feat often find themselves stuck, or experience the 'peeling effect' of the bridge as they lose the tops of their boxes. Hence the name 'canopener'.

Why Don't They Fix the Bridge?

'They' in this case probably means the City of Durham or the railway company, the North Carolina Railroad. The problem with raising or moving the bridge is that it's a railway bridge. Changing the height of the bridge would involve raising all the railway crossings in the area, which would be prohibitively expensive. The road can't be lowered because there is a sewer line running 1.2m under Gregson Street. The railway trestle stays where it is.

The city decided that if it couldn't fix the bridge, it would have to fix the drivers. The following measures have been taken:

Why is the Bridge so Famous?

Jürgen Henn is good with computers. He set up cameras outside his office to record the traffic, starting in 2008. He posts videos of the crashes on Youtube in the hope of warning people. Since then, he has recorded more than 142 crashes at the bridge. (He has also, incidentally, helped catch a hit-and-run car driver.) Another sign of Henn's good citizenship is that he helps clean up the crash area. In response to subscriber demand, he now sells some of the interesting debris on his 11foot8.com website. Henn has been interviewed on television and the internet more than once. The story about the bridge has gone viral on occasion, and internet users from around the world add '11foot8' to their YouTube notifications to catch sight of the latest crash. The what3words locator for the bridge is, appropriately, ideal.catch.boom.

How do fans respond to new Canopener Bridge videos?

The bridge was hungry.
This bridge is the gift that keeps on giving!
We should start a GoFundMe to repaint the beam.
It was a Penske truck! The bridge's favorite food, along with Ryder1, of course.
'Red means stop.' My four-year-old son.

Whether or not US rental truck drivers ultimately prove to be ineducable remains to be seen. It's safe to say, though, that the 11foot8 YouTube channel will continue to provide subscribers with Schadenfreude for a long time to come.

1Penske and Ryder are brands of rental truck.