The Harlequin Ladybird - Pest Control Turned Pest Content from the guide to life, the universe and everything 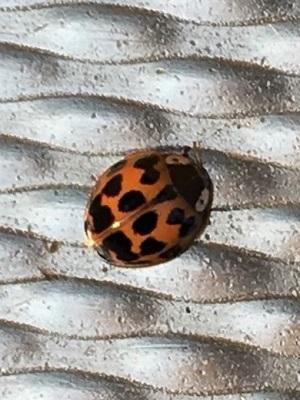 When you hear the word 'ladybird' or 'ladybug' you might think of a distinctive beetle with red wing cases and black spots. Insects in the coccinellid family are a familiar sight around the world, and many of them have spots, although others have stripes and some are more brown than red, for example. There are even black ladybirds with red spots and orange ladybirds with white spots. They are friends of gardeners as they eat aphids and other insects that can damage plants.

These delightful creatures are at risk from a variety of things, including bacteria, birds, parasites and pesticides. They have been even more at risk in recent years, though, and it is their own cousin, the Harlequin Ladybird, that is the threat.

The Harlequin is bigger than most ladybirds so it eats more aphids, which means less food for the smaller ladybirds. It also eats other insects' eggs and larvae including those of fellow ladybirds, and it even eats adult insects, including smaller ladybirds. Another advantage it has over its cousins is that it is able to breed as soon as it emerges as an adult from its pupa. While other ladybirds can breed once in the season after they mature, the Harlequin can breed several times. This results in much larger numbers of offspring.

Harlequin Ladybirds can also cause problems for humans. Harlequins have been known to bite people, and, occasionally, bitten people have experienced an allergic reaction. Many ladybirds are able to produce 'reflex blood' from their leg joints in self-defence against predators, and Harlequins, being bigger, produce more of it - this toxic yellow substance can stain clothing and irritate the skin. Harlequins eat fruit when preparing for the winter, and this has caused problems especially in the wine industry - if too many Harlequins are captured during the grape harvest, they will produce reflex blood that taints the resulting wine.

The Harlequin Ladybird Harmonia axyridis was originally found only in Asia, in an area stretching from Kazakhstan to Japan via China and southern Siberia. Its renowned appetite for insect pests such as greenfly led to its introduction to the USA as a biological control1 in agriculture. The Harlequin was first introduced to California in 1916 but did not escape into the wild at that point. Seven-spot ladybirds were introduced to the USA from Europe in the 1950s and they became established in the 1970s. A second wave of Harlequins were introduced to the USA in 1988 and shortly after that they started to establish dominance outside the agricultural field. The Harlequin had also been introduced in Europe in the 1980s. It crossed the Channel to reach Essex in the UK in 2004 and by 2014 Harlequin Ladybirds could be found anywhere from the south of England to the north of Scotland, earning them the title of 'fastest-spreading invasive species in the UK'. They have continued to spread around the world, often by hitchhiking in transported food containers - they were found in South Africa in 2004 and reached New Zealand in 2016.

Like its namesake, the brightly-coloured Harlequin character from the Commedia dell'Arte, this ladybird can be found in a number of different colour forms.

The most common colour is orange with at least 15 black spots, but black-spotted yellow and red Harlequins can also be found. You may also see black Harlequins with two or four red spots. The main way of distinguishing Harlequins from the native ladybirds they imitate (such as the seven-spot or two-spot) is that they are generally larger than their cousins (7-8mm compared to 3-7mm).

Harlequin Ladybirds can be found out and about throughout the year, but are most visible in the autumn time when they swarm together to find a place to shelter during the winter. While the smaller ladybirds overwinter outside in piles of leaves, under the bark of trees or in the hollow stems of plants, Harlequins like cool but frost-free buildings such as garden sheds.

There are a number of organisations that are interested in the Harlequin and its effect on other ladybirds. The Invasive Species Compendium monitors Harlequin Ladybird sightings around the world.

In the UK, the Ladybird Survey asks people to report sightings of Harlequins and any other ladybirds they encounter, to monitor the range and health of the different species. Similarly in the US the Lost Ladybug Project asks people to search for ladybirds and upload photos to generate data for analysis.

In Germany populations of native ladybirds appear to have recovered after decreases following the introduction of the Harlequin. However, research in the Netherlands indicates that we should still be concerned about ladybirds.

So, next time you see a ladybird, look twice to see if you can tell what species it is, and consider contributing to a research project for your area. 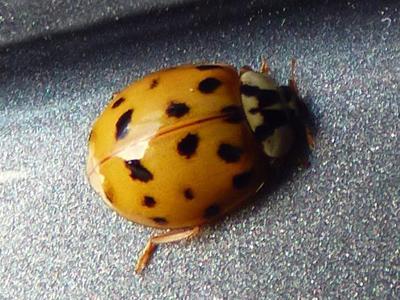 Australia knows all about invasive species, thanks to the introduction of cane toads from Hawaii in 1935 with the aim of eradicating cane beetles.

1In contrast to chemical controls such as pesticides.