Sudley House, Liverpool, UK Content from the guide to life, the universe and everything 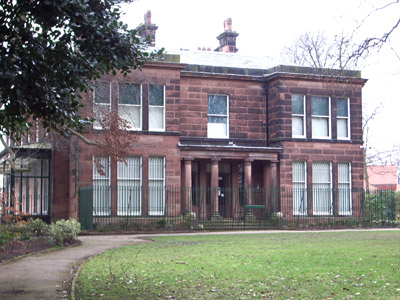 Situated a few miles outside Liverpool City Centre, Sudley House is a Victorian stately home that is renowned for being the only one in the world still containing its owner's original collection of paintings.

Sudley House was built in 1821 for Nicholas Wright, a corn merchant. In 1883, it was purchased by the shipping magnate George Holt, and he lived there with his wife Elizabeth and daughter Emma. George was a philanthropist, and donated money to the city of Liverpool to improve the living conditions for everyone who lived there, but he also spent money on extending Sudley House and building up a collection of paintings that he then put on display in his home.

He had a particular fondness for paintings by Turner, and purchased three of the artist's works. He also commissioned paintings from contemporary artists, most notably the pre-Raphaelite painter John Melhuish Strudwick. He must have had a liking for the pre-Raphaelite style in general, as he also added works by the most well-known artists in that field - Rossetti, Holman Hunt and Millais.

The cream of George Holt's collection was put on display in the Dining Room, so that he could impress his friends when they visited for dinner, but every room in the house had some paintings in, including the hallways. His favourite room was probably the Library, as custom-built decorated wood cabinets were fitted at the base of the walls for his books, leaving plenty of space above the cabinets for paintings, including family portraits, and a model of one of his company's steam ships.

George died in 1896, and his only child Emma inherited the house. She lived there until she died in 1944. Like her father, she gave money to good causes for the improvement of the city. She took the Morning Room to be her office, as the light was good, and she provided support to the team of District Nurses, and to charities aiming to improve the health of the people in the city. She also served on the council of Liverpool University1 alongside social scientist Eleanor Rathbone, who went on to have a building named after her on the university campus.

Emma bequeathed Sudley House to Liverpool, and the city council took it over to use as an exhibition space. The paintings were kept, but the furniture was all sold, and most of the dividing walls between the rooms on the first floor were removed to create spacious galleries. Sudley House is now part of National Museums Liverpool.

Sudley House has four floors. The basement and second floor are for staff only, but visitors can explore the ground floor and the first floor. On the ground floor, the entrance leads into the Main Hall, where a portrait by Millais has pride of place opposite the staffed welcome desk, and paintings by other pre-Raphaelites such as Edward Burne-Jones and Vicat Cole2. A descriptive panel on the wall leads you through to the Library first, where George Holt3 welcomes you to the house via a video presentation4 and you can read about the artworks in the room. A door leads through to the Drawing Room, where you can watch a video narrated by a parlourmaid and see a few pieces of furniture in a similar style to the items that would have been in the house when it was a family home. You are then led through to the Garden Hall, where paintings by Strudwick and Millais can be seen, as well as views across the garden5 from the windows. Next is the Dining Room. The original sideboard is in the room, on loan from the family who bought it when the furniture sale took place, and there is also a long dining table with place settings on it. Two paintings by Turner are on display there, plus other fine artworks by artists such as Landseer. The Morning Room is next, decorated with more paintings by Landseer, Millais and others, and furnished with a desk and a video of 'Emma Holt' talking about her work.

Heading upstairs, the first floor landing is home to a striking portrait of a macaw amongst other paintings. There are two education rooms where workshops and events take place, a playroom for children to dress up and draw their own artworks, and an exhibition about toys through the years from 1880 to the 1950s. There is a temporary exhibition gallery on this floor, and exhibitions have included 'Drip Dry' - fashion made from synthetic material, and '20th Century Chic' - dresses from the 1900s to the year 2000.

The paintings owned by Sudley House are featured in digital form on the BBC YourPaintings website.

The garden is also open to visitors. The path near to the main entrance leads round to a grass area with mature trees that is bright with daffodils and crocuses in spring. The Garden Hall in the house looks out over the rose garden, which is impressive in summer and also contains a memorial to Hillsborough and a sundial. You can also see the conservatory, that contains plants from warmer climates, and look out across the public parkland behind the house.

Sudley House is open every day from 10am to 5pm except Christmas Day, Boxing Day and New Year's Day. Entrance is free, although donations are welcomed. There is a small café in the kitchen of the house, serving boxed salads and sandwiches, soup, cakes and drinks. Inside the café you can purchase postcards and other small souvenirs.

There is some parking outside the house, including several spaces for Blue Badge holders just by the entrance. The entrance has a ramp, and there is a ramp down to the café. Standard toilets and an accessible toilet are available on both public floors. There is a lift to all floors for the use of staff and visitors.

Activities for children, exhibition-themed events and workshops are scheduled throughout the year. Up to date information can be found on the Sudley House website.

1George Holt had donated money to the Liverpool College, as it was then, to enable medical research to take place, as he also thought it was important to prevent disease.2Artists who were contemporaries of 'the last pre-Raphaelite' Eleanor Fortescue-Brickdale.3 Well, an actor who looks remarkably like him. 4 Subtitles and sign language options can be selected. 5 As you might expect.