The King of Prussia and the Potato Edict of 1756 Content from the guide to life, the universe and everything 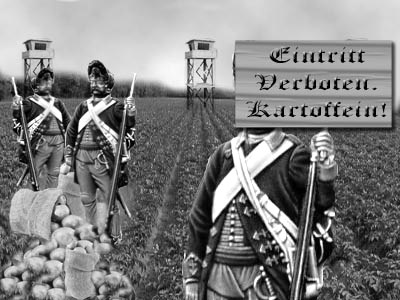 Baked, boiled, mashed, or fried: the tasty potato is inseparable from the modern idea of good European cooking. From the damp UK, where fish and chips is as British as the football match, to sunny Greece, where the kids drool over πατατες  τηγανητες1, solanum tuberosum is everybody's favourite tuber. In Germany, particularly, the potato is so much a staple of the kitchen that it is hard to imagine German cooking without it. But it was not always so. In fact, back in the 18th Century, many Germans found the potato's claim to the foodstuff category somewhat spurious. At first, the French would only feed it to their pigs. Pigs are not known for their discriminating tastebuds. So how did the German potato story change? And what did it have to do with psychology?

In 1492, Christopher Columbus stumbled upon the Americas. He claimed he'd 'discovered' them, although there is evidence that at least some people suspected the existence of the large continents beforehand. At any rate, the Italian sea dog preened unduly about it, and the Spanish liked to show off all the unusual things they found in the 'New World' – among them, strange new animals and plants. As explorers and settlers began to criss-cross the Atlantic, livestock and cuttings were taken along, and soon, there was a phenomenon known as the Columbian Exchange, in honour of Guess-Who. The Columbian Exchange was mostly beneficial, with the exception of some unwanted micro-organisms. Europeans got plants galore, among them, the humble but nutritious South American potato.

Most European peasants, however, took one look at this lumpy root and turned up their noses. There were reasons for this:

However, grain crops were unreliable. Populations were growing. People were hungry, darn it, and potatoes were actually good for you. But how to get the peasants to eat them? Enter Friedrich der Grosse, otherwise known as Frederick the Great, or simply 'Old Fritz'.

Prussia was an agricultural country, first and foremost. Its people were practical, hard-working, and possessed a dry sense of humour. All three qualities could be summed up in the common (male) Prussian way of asking for the Gents, namely, 'Wo sind die Pferde?' ('Where are the horses?') In these pre-industrial days, it was common guest courtesy to water the injured ankles of the host's plough horses –  urine was beneficial, and... waste not, want not.

This kind of thinking was in evidence all the way up to the palace. Friedrich der Grosse was a clever man – as his pen pal Voltaire would attest. He had many accomplishments as a ruler, a general, and a musician. But most of all, Friedrich knew his people. So he used reverse psychology.

To establish the idea that potatoes were cool, Friedrich planted his own potato field. One suspects that the king did little of the actual gardening, but it was his field, after all. He located it prominently, and put a nice fence around it. Then came the best part: he set soldiers to guard the potatoes.

The canny peasants studied this well-protected field. Aha, they thought, perhaps we have misjudged the value of the potato. If the king sets soldiers to guard them...

Soon potatoes were disappearing from the king's field. Oddly, the usually perspicacious Prussian military didn't seem to be too effective... At last, potato farming got a start in Prussia, courtesy of cuttings from the royal spuds.

The spread of potato culture was slow, however, and so Friedrich implemented stricter measures. On 24 March, 1756, Friedrich issued the Kartoffelbefehl, or 'Potato Edict'. Everybody was to plant potatoes, whether they liked it or not. Wherever they could find room.

No wonder the man defeated the whipped-cream-loving Austrians. His soldiers were well-nourished. His people were also much less likely to foment revolution. Instead, everyone could get on with important things, like planting more potatoes and taking care of the horses.

Today, tasty potato dishes are German staples. There are potato pancakes, potato salads, and potato dumplings. Potatoes can be found in haute cuisine restaurants, or enjoyed outdoors from the Pommes-Frites-Bude. Filling, nutritious and tasty, the potato keeps Europe from going hungry. The Germans thank Old Fritz and his psychological insight.

More about the history of the noble potato in Europe can be learned from 'The Impact of the Potato'.

A biographical sketch of Frederick the Great explains how this leader made Prussia into a significant power.

And, lest you think the Prussian king merely pragmatic, here's a love poem, called 'La Jouissance' ('The Orgasm'), which Frederick addressed to somebody named Francesco Algarotti.

1This is Greek for 'pommes frites' (French fries).2'What the peasant doesn't know, he won't put in his gob.'