The Bighorn Medicine Wheel, Bighorn Mountains, Wyoming Content from the guide to life, the universe and everything 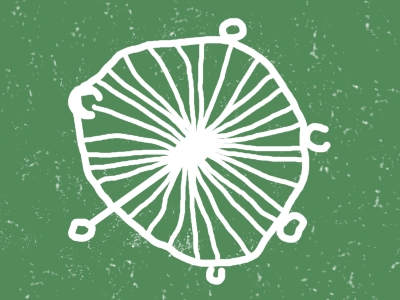 Across the plains of the American West, nestled high up in Wyoming's mountains is the Bighorn Medicine Wheel. The Wheel is a Native American sacred site, and a National Historic Site. Situated some 9,600 feet above sea level on Medicine Mountain, towering above the tree line, its repose overlooks the Big Horn Basin. The site was declared a National Historic Landmark in 1970; recently the area was expanded to encompass nearly the entire sacred mountain it rests on. As a US Historic Landmark, the Wheel is protected by the Forest Service in conjunction with a council of Native Americans – the Medicine Wheel Coalition – which consists of Natives from 79 tribes.

No one is quite sure who built the landmark. The US Forest Service dates it as being built between 1200 and 1700 AD. It is nearly impossible to tell, as stone cannot be dated save for estimations based on lichen growth. Crow Indian legends say the Wheel was already in place when their tribe arrived in the area, which was in around 1200 AD. Natives have been traversing the area for nearly 10,000 years, so when it was built and why will likely remain a mystery. When the Wheel was built, or why, prove in modern times to be a moot point. Natives and non-Natives alike, from nearly all parts of the world, pay visit to the sacred place. We may never know what the Wheel was used for in the past, but we know what it is used for now. Over 100 tribes of Native Americans still use the site to the present day for ceremonies and vision quests1, just as is suspected it once hosted long ago.

The Medicine Wheel itself is around 245 feet (75m) in circumference, with 28 spokes hemmed in by a circle of stone. There are seven cairns; a larger central cairn is surrounded by six others around the circle, five of which are touching the Wheel, with one about 10 feet (3m) away. Four of these cairns face the center of the Wheel, the other two face north and east respectively. These cairns are believed to have been shelters for vision quests, and may at one time have been covered in skins supported by lumber. Today it is enclosed by a rope and timber fence; non-Native visitors are asked to stay outside. Native Americans are allowed to enter the Wheel, and special provisions can be arranged if Natives want to hold a ceremony inside.

The road up to the Wheel itself was closed to traffic in 1993; visitors today are asked to walk the mile and a half to the site. This helps to preserve the sense of the sacred. The pilgrimage helps to set one in the right mindset and prevents this special place from becoming little more than a roadside attraction. In years past, before the road was closed, much of the alpine vegetation had been trampled nearly to death; some of the plant life takes nearly 20 years to regrow. Those who feel they cannot make the walk up are allowed to drive, but it is amazing how few actually take advantage of this. While the road is a bit rough and undulating in its course, offering the intrepid a walk both up and downhill, it is a rewarding hike.

The fence surrounding the Wheel is covered with offerings left by Natives. Prayer flags are tied to the ropes, as well as various medicine bags and other trinkets. These offerings are truly fascinating; the types of offerings are as varied as the many tribes who visit the site. Each of these offerings has a story behind them, and if one is sensitive to such things they empower the site with a further sense of the sacred. This writer has seen so many interesting offerings left, a wedding ring, a set of dog tags, pictures and sometimes notes are tucked under stones along the circumference. Although it is discouraged, non-Natives leave offerings as well. Some of these are removed from the site by the district archaeologist – those that are deemed non-traditional such as bits made of plastic, commercial items, and coins. These items, while removed from the Wheel, are buried nearby by the archaeologist so long as they don't pose an environmental threat. Often times the offerings left reflect the many reasons people visit the site. Some come from mere curiosity, more come for deeper reasons. Many come to pray or meditate, others to grieve a loss or mourn. Many come to ask a blessing, or just to celebrate life itself.

Visitors are asked to walk around the circle to the left, or sun-wise. In many traditions, both Native and European, this direction promotes a positive flow of energies. Many say that just the act of walking as such is to invoke a blessing. Some theories say that the Wheel is aligned astronomically, the eastern cairn is said to align with the rising sun on the summer solstice, but whether this is coincidence or by design is subject to speculation.

It is quite interesting to note that the Medicine Mountain, which the Wheel rests upon, is itself considered sacred to Native Americans. Geologically the site is a rarity, being one of only several places in the world that is a 'nucleus of continents'. This means that the rock that the mountain comprises was among the first stone to cool when the Earth was still molten, billions of years ago. Perhaps the Natives who built the Wheel somehow knew intuitively that there was something special about the mountain. There is no way to know for certain of course, but the fact is rather auspicious nevertheless.

1A rite of passage in some Native American cultures.