Les Treize: a Christmas dessert from Provence Content from the guide to life, the universe and everything 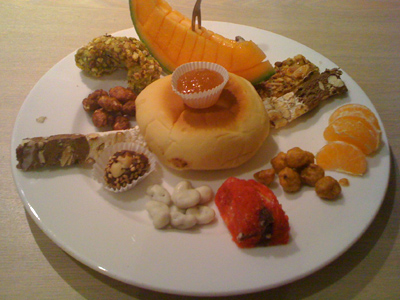 Traditional Christmas desserts such as plum pudding aren't always to everyone's taste, and after a large meal sometimes a lighter option to nibble on is preferred.

In Provence, in the south of France, there are many interesting Christmas traditions, such as driving the prettiest sheep to church on Christmas Eve (le pastrage). The traditional dessert served is Les Treize, meaning the 13, representing Christ and his 12 disciples. Depending on family tradition, it can be eaten either before or after midnight mass on Christmas Eve. The table should be set with three candles, for the Trinity, and an extra space should be laid for one's ancestors. Everyone at the table should try at least a little of each dessert.

Each household has its own variations on which 13 tasty morsels they serve, and there is no definitive list, but there are some categories common to all versions.

To accompany the meal, vin cuit, representing Christ himself, should be served. This is not, as the name might suggest, mulled wine, but a fortified drink created during the wine making process. A fortified wine such as sherry could be used as an alternative.