The LBW Rule in Cricket Content from the guide to life, the universe and everything 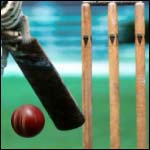 In cricket, the dismissal of a batsman can be achieved in a number of ways. Some of these are obvious - a batsman halfway between the wickets when one is broken1 has been very obviously run out. At other times a decision as to whether or not a batsman is out is very hard to judge, such as a batsman millimetres from his ground2 when his wicket was broken. Television replays can now settle some tough decisions, such as run outs, but not all3. The supreme example of these later decisions is the most controversial of all - the Leg Before Wicket, or LBW, rule.

The reasoning behind the LBW rule is sound - a batsman is a batsman, not a legsman, and must use his bat, not his leg pads, as his first line of defence. Were it not for this rule, there would be nothing to stop a batsman playing for a draw to stand in front of the wicket doing nothing. Unfortunately, the rule depends on the opinion of the umpire, which is why it is so controversial. Should the ball hit the batsman on his leg pads, and the bowler (and usually half the fieldsmen) appeals to the umpire4, the umpire must ask himself a number of questions...

NOTE: The aim here is to put the questions in some sort of logical order. This is not always possible, as should become clear.

Question One - Was this a Fair Delivery?

It is easy to overlook this question, but if the answer to it is 'no', the umpire can call a no ball and not bother to ask himself anything else. If the bowler was within his ground5 when he released the ball and had his arm straight throughout, chances are that it was a fair delivery, and the umpire can move on to question two.

Question Two - Would the Ball Have Gone on to Hit the Wicket if the Batsman's Legs Hadn't Got in the Way?

This question is truly the nub of LBW. If the ball wasn't heading for the wicket, then it can't have hit the leg before the wicket. It wasn't going to hit the wicket at all. Thus a ball that was going to the left or right of the wicket is not out, as is one that hit the batsman in what are, in polite cricketing circles, known as the batsman's goolies, because the ball would have gone over the wicket.

Incidentally, if the ball actually did hit the wicket after the pads (provided it dislodged a bail), then not out LBW. Not that this matters in any real terms, since the batsman is out 'bowled'. Bowled always takes precedence over LBW. It follows from this that the 'before' in LBW means 'in front of' rather than 'and then'.

Question Three - Did the Ball Hit the Batsman's Legs on a Line between the Two Wickets?

One might think this to be a rather irrelevant question. Its purpose is the same as that of the LBW rule itself - to prevent negative play by the batsman. If he moves away from the wicket area, he isn't likely to be batting too defensively, and so is offered an incentive for positive play as it decreases his chance of dismissal.

This question cannot stand alone. Just moving one's legs does not, on its own, constitute positive play, so in the event of a 'no' answer to question three, the umpire must ask himself question four.

Question Four - Was the Batsman Attempting to Play a Stroke at the Ball when it Hit Him?

This question only needs to be asked if 'no' was the answer to question three. If the umpire thinks 'Yes, he was attempting a stroke', then not out. If he thinks 'No, he wasn't', then the umpire must carry on with his questions. Again, encouraging positive play is the intention.

Question Five - Did the Ball Pitch (bounce) outside the Line of Leg Stump?

Most of the LBW rule is to discourage negative play among batsmen. Question Five's purpose is to discourage it among bowlers. The wicket, not the legs, is the bowler's target, and is all he must aim for. So, if the answer is 'yes', then not out. If it is 'no', then one final question remains. (The leg stump is the one nearest to the batsman's legs (given that he stands sideways). It is sometimes referred to as the on stump, as the one furthest from the batsman's legs is called the off stump.)

Question Six - Did the Ball Hit the Bat, or Gloves Holding the Bat, before Hitting the Batsman's Pads?

The bat must be the first line of defence for the batsman. But it does not have to be his second. If the batsman has hit the ball, but it appears to be heading for the wicket, then he can kick it away if he wants, or even tap it away with his bat6. So a 'yes' answer here means not out, and a 'no' answer completes the list of questions. The umpire can raise his finger (the index finger), and give the batsman out.

The batsman may be given out if the string of answers is:

The potential for borderline decisions is great. The bowler could have been just outside his ground. The ball could have hit the batsman just outside the line of the two wickets, pitched just outside leg stump, or glanced the faintest edge of the bat on the way through to the pads. Questions two and four are subjective. They depend on what the umpire thinks, not what he knows (or even thinks he knows).

Modern technology can now make umpires look stupid. Replays have always been able to show that some decisions were obviously wrong, but we can now know that more are wrong than ever before. Channel 4 took over cricket coverage in Britain in the mid-1990s and immediately introduced a number of innovations. The 'red area' can be imposed on a pitch to show precisely where the line between wickets is. A shot of the wicket can be imposed on the image of the batsman to show whereabouts on the wicket the ball was heading.

Most recently, Channel 4 in the UK has used space-age technology with Hawkeye, a sensitive computer system that can trace the ball's flight path to determine exactly where it would have gone. This can show the truth about decisions no human could possibly make.

So, is the LBW rule a good thing? The simplest, and correct, answer is 'obviously, or they wouldn't have it'. It may be a source of controversy, but imagine how boring cricket could get without it. Some say it's quite boring enough already, and we certainly can't have it getting worse. And, once in a while, Hawkeye can show an umpire to be an absolute genius.

1Most ways of getting batsmen out in cricket involve the wicket, a structure of three wooden stumps bridged by two little wooden bails, being broken. This means the ball knocking at least one bail off. If one is already off, the fielding team can knock the other one off, or if both are off, they can knock a stump out of the ground. If all the stumps are out of the ground, they can put one back and then knock it out again.2A batsman is in his ground when, he has some part of his body or bat (provided he's holding it) behind a line called the popping crease, about four feet in front of the wicket.3Officially anyway. Unofficially they can make umpires look very stupid. See below.4By saying, or rather yelling, 'OWZAAAAT!!!!!'5The same as the batsman's ground, except that he must also be between two lines called the return creases, which are perpendicular to the wicket.6But he can't slog it away with his bat, or he'll be out Hit the Ball Twice. He also can't knock it away with a hand not holding the bat, or he'll be out Handled the Ball.