Wartime Use of Conkers Content from the guide to life, the universe and everything 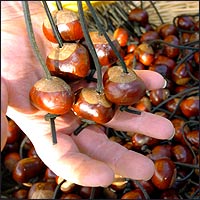 The following is the content of a notice that would have appeared on the walls of classrooms and scout huts during World War One:

Collecting groups are being organised in your district. Groups of scholars and boy scouts are being organised to collect conkers. Receiving depots are being opened in most districts. All schools, WVS centres1, WIs2, are involved. Boy Scout leaders will advise you of the nearest depot where 7/6 per cwt3 is being paid for immediate delivery of the chestnuts (without the outer green husks). This collection is invaluable war work and is very urgent. Please encourage it.

So, the question arises, why did the War Department have this urgent need for conkers?

The short answer is that horse chestnuts (or conkers) were needed as a raw material for the Weizmann Process for the production of propanone (acetone); a solvent which, in turn, was needed for the manufacture of cordite - a smokeless propellant powder, used in explosives. Indeed, demand for propanone soared dramatically at this time, and outstripped the existing supply.

It required between 80 to 100 tonnes of birch, beech or maple wood to yield one tonne of propanone.

However, blockades of shipping lanes made imports to the UK difficult, and so Britain needed to manufacture her own propanone from scratch.

David Lloyd George, who at the time was Minister of Munitions, asked Professor Chaim Weizmann4 of Manchester University to come up with an alternative way for making propanone. Weizmann was aware of an anaerobic fermentation5 process using Bacillus species, originally noted by Louis Pasteur and developed by others, whereby potato starch could be used as the feedstock, yielding propanone and butanol. Because worthwhile yields were never achieved on an industrial scale, Weizmann investigated further and was able to refine the process and produce propanone (and butanol, which was required for manufacture of synthetic rubber) from maize starch; using a range of bacteria.

As his research continued, he discovered a species of Bacillus, which was highly vigorous and could tolerate the acidic conditions, giving good yields from a variety of feedstocks, including cornmeal mash and starches from maize and rice. This bacterium was four times as active as any previously used and was originally named as Bacillus granulobacter pectinivorum. Later on this became known as Clostridium acetobutyculum.

An important by-product of the Weizmann Process was the recovery of vitamin B2 (riboflavin).

Weizmann patented his process and offered it to the British Government. However, they were uninterested until February 1915 when the war effort demanded quantities of propanone that could not be met from the traditional supply. At this point the Admiralty asked the Nobel Company to investigate Weizmann's Process, and Weizmann showed that he could convert 100 tonnes of grain to 12 tonnes of propanone and 24 tonnes of butanol. The Nobel Company recommended that this process be adopted, whereupon the government promptly commandeered brewery facilities, rapidly built new plants and installed the process. Factories were established at Poole in Dorset and King's Lynn in Norfolk, producing as much as 90,000 gallons (over 400,000 litres) of propanone a year.

Now, at the beginning of the war there was also a shortage of grain, and so Britain had to rely on imports of maize and even potatoes for starch. When supplies of maize ran short, clearly, another source of starch had to be found that would not interfere with the already restricted food supplies; and so by May 1917, Weizmann had adapted the process to produce the solvent from horse chestnuts - conkers. Thus, in a last desperate measure, children throughout Britain were asked to collect conkers. However, according to the Imperial War Museum, in 1917, only 3,000 tins (sic; presumably they mean tons) of conkers were actually processed).

Lloyd George's gratitude to Weizmann was such that it led directly to the controversial 1917 Balfour Declaration, which set out British approval for the establishment in Palestine of a national home for the Jewish people - the state of Israel.

1WVS stands for Women's Voluntary Service.2WI stands for Women's Institute.3Seven shillings and six pence per hundredweight. One hundredweight is 50.8kg.4Chaim Weizmann was the leading Zionist of the time, and in 1948 became the first President of Israel.5The term 'fermentation' applies to the decomposition of organic substances by organisms, especially bacteria and yeasts. Anaerobic fermentation pertains to the process under conditions of restricted oxygen concentration.