Francis Ford Coppola - Director Content from the guide to life, the universe and everything 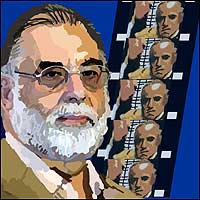 One of the most influential directors of American Cinema, Francis Ford Coppola has been responsible for some of the most critically acclaimed pictures of the Western world, from low-budget horror movies to sprawling family epics, award-winning masterpieces and embarrassing flops that threatened to bring his career to an end on more than one occasion.

Francis Ford Coppola was born in Detroit, Michigan in 1939 to an Italian-American family. After developing an interest in making home movies as a child in New York, where the family had moved to, he enrolled at UCLA to study filmmaking. He graduated with a Master of Fine Arts in 1967, and went on to become one of America's most successful directors, particularly in the 1970s.

Coppola married Eleanor Neil in 1963 and they have three surviving children - Mary, Roman and Sofia. Roman and Sofia are both directors in their own right. Their eldest son Gian-Carlo died in a 1986 boating accident.

Coppola's first major film, Dementia 13, was released in 1963. He followed this with a number of other successful directorial efforts, and won a Best Adapted Screenplay Academy Award for writing the biopic Patton in 1970. Around this time he founded a film production company called American Zoetrope with George Lucas. The two San Francisco-based directors would collaborate on many films over the coming years including Lucas' first films THX 1138 and American Graffiti.

In 1975 Coppola bought an estate and house in California's Napa Valley. Three years later The Niebaum-Coppola Estate Winery produced it's first Bordeaux, and continues as a successful family run business today. The family also own and run cafés, hotels and restaurants1.

Coppola is seen as a pioneer of modern filmmaking, and a director not afraid of taking risks and experimenting with his movies. At times his vision to complete a project has almost financially ruined him. This is particularly true of Apocalypse Now, which spiralled out of control and over budget, and One From The Heart, a down-beat musical that bankrupted American Zoetrope. Indeed, it was only Coppola's business interests outside the movies that enabled him to carry on working in his chosen profession. Coppola considers Orson Welles and Stanley Kubrick to be his main early influences. Indeed, he is often compared with Welles: two auteurs sharing the same singular vision which would occasionally lead to the brink of self destruction.

Despite having relatively little recent success, Coppola remains one of the most respected writers, producers and directors in Hollywood, being one of only five directors who have won Best Picture, Best Director and Best Screenplay Academy Awards for the same film2. In October 2005 he announced that his nine year hiatus from directing was to end, by stating his intention to write, produce, direct and fund an adaptation of Youth Without Youth by Romanian author Mircea Eliade.

Father to both Francis and his actress sister, Talia Shire, Carmine Coppola was a noted composer and conductor. He worked on several of his son's films including The Godfather Trilogy and Apocalypse Now.

The most well known of Coppola's offspring, Sofia was born in 1971 and is a critically acclaimed and highly successful director. Sofia featured as an actress in all three of the Godfather films. Her appearances in the trilogy's first and second parts were minor and uncredited. She played Mary Corleone in the third, to resoundingly bad reviews3. She has since directed two major films - 1999's The Virgin Suicides and 2003's Lost in Translation, which won the Best Original Screenplay Academy Award in 2004.

Born in 1965, Roman Coppola is also a director, although has attained less commercial and critical success than his sister. His sole directorial feature is CQ, which was released in 2001 and stars Jason Schwartzman, who is a cousin to Roman and Sofia. He is also known as a second unit director on his father's and sister's films, as well as a music video director.

Born Nicholas Kim Coppola4 in 1964, Nic Cage is one of Hollywood's most successful actors. Cage changed his name in 1983 so he wouldn't be seen to trade on his family name. As well as an actor and producer, he has written songs for a number of films.

Though Coppola has made many films during his career, his fame tends to revolve around a number of key works.

Based on the novel by Mario Puzo5, The Godfather trilogy is an epic saga centred on the fictional Corleone Mafia family, and principally the two 'Godfathers'6 that headed the family - Vito Corleone and his son Michael7. Starting in 1945, the films span a period of over 30 years. The first two instalments of the trilogy both won the Academy Award for Best Picture and are considered by many to be the finest films ever made8. The third film received less critical acclaim and its merits are endlessly debated by the trilogy's devotees and detractors.

Released in 1974, the same year as The Godfather: Part II, The Conversation was a long gestating project for Coppola. Despite writing the screenplay in 1966, he was unable to get sufficient funding until after the success of the first Godfather film. The film centres on a surveillance expert played by Gene Hackman, a controversial subject at the time as the Watergate Scandal had recently been uncovered. The film was nominated for several Academy Awards and won the Palme d'Or at the prestigious Cannes Film Festival. It is said to be both Hackman's and Coppola's favourite work.

Loosely based on Joseph Conrad's novel Heart of Darkness, Apocalypse Now is a film set in the Vietnam War. Following the main character Captain Benjamin L Willard (Martin Sheen) on a mission to kill9 Col Walter E Kurtz (Marlon Brando), a renegade Special Forces commander. The nightmare that was the film's production is now legendary, with typhoons destroying sets, Martin Sheen suffering a heart attack, Brando turning up for filming vastly overweight and Coppola's mental state becoming very fragile. Coppola's wife filmed a 'making of' documentary during the production which was released in 1991 as Hearts of Darkness: A Filmmaker's Apocalypse.

Anything you build on a large scale or with intense passion invites chaos.

Art depends on luck and talent.

We were in the jungle, there were too many of us, we had access to too much money, too much equipment, and little by little, we went insane.

In the 1970s Coppola made a Japanese whisky commercial. Coppola's daughter Sofia used this event as inspiration for a Bill Murray scene in her film Lost in Translation.

Coppola has a holiday home in the Central American country of Belize. Although not a citizen of the country, he is Belize's honorary ambassador to the United States, holding the title "His Excellency, Ambassador Francis Ford Coppola".

1Including the Rubicon Restaurant in San Francisco, co-owned by Robert De Niro and Robin Williams.2For The Godfather: Part II (1975).3Although this was mainly due to the fact that she had been cast as a last-minute replacement for the then-popular actress Winona Ryder, who had been forced to pull out from the project due to ill health.4He is the son of August Coppola, Francis' brother.5Who also worked on the each of the films screenplays.6'Godfather' being a term of respect and authority among Mafia organisations.7Played principally in the films by Marlon Brando and Al Pacino, respectively.8They have at certain times occupied positions #1 and #4 on The Internet Movie Database's ranking system.9or 'Terminate, with extreme prejudice', to quote the film.