Stick-fighting - the Irish Martial Art Content from the guide to life, the universe and everything 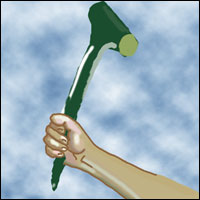 If you one day happen to grace the fair land of Ireland, you will eventually find yourself in a souvenir shop1. You'll see rows and rows of the plastic, fixed smiles of slightly constipated-looking leprechauns. These leprechauns are more than likely carrying one of the following: a pipe, a cane, a shamrock or a knobbly stick.

The pipe is self-explanatory, the cane might be there to help him walk on his gammy leg, the shamrock is the universal unofficial sign of Ireland and the other stick... must be a walking stick as well, right?

Wrong. Say hello to the shellilah, bata or shillelagh, the Irish stick-fighters and the Irish faction wars.

The faction wars took place in Ireland during the 19th Century, after the Great Famine of 1845 - 47. A faction was basically a group of men, often based around a family, who would fight with other factions in pitched battles in towns at a fair day or after mass on Sunday. While the factions themselves reached the height of their infamy during the 19th Century, groups of men had been banding together since the 1500s to fight for Irish tenants' rights. Eventually these groups lost their way and instead began to fight each other. The method of starting a faction fight often involved dragging a coat along the road and daring a rival faction member to touch it. After that, the combatants would be taken to an area and would fight until one side quit. Still, as in any form of duelling, serious injury or death were always a risk. The men would then proceed to beat the living daylights out of each other by the ancient art of stick-fighting.

Okay, But What Was Stick-fighting?'

Stick-fighting was when two men would fight each other with different types of sticks. It had its origins in an ancient Celtic series of games called the fiancluichí, in which young nobles would take part in several different contests of skill, one of which was the ancestor of 19th-Century stick-fighting. While you may think this was just two unskilled men using sticks in order to try and kill each other, there were actually several movements and a skilled fight was a series of feints, blocks, strikes, backhands - not to mention the vast amounts of different hand-grips. As well as that, there was a set of rules.

Rules? What Rules? Surely They Just Beat The Hell Out Of Each Other

Surprisingly...no. When a poor man has got nothing, honour means everything. These were The Rules Of The Stick:

Oh certainly. They usually filled a stocking with sand and used it as an improvised morningstar2; a tied up apron with a brick in it was another favourite. These were both fearsome weapons that did a hell of a lot of damage. As said above, women could not be hit, but if a man holding a long stick or staff making wide sweeping movements accidentally hit a woman it was okay.

So There Were Different Types Of Sticks?

This 'sport' had been evolving for a few hundred years since the Fiancluichí, and let's face it - after a while anyone would get bored waving the same stick about. These are just a few of a vast variety of different fighting sticks:

The infamous Smachtín Buta Luaidhe, or Loaded Butt, was made by taking a piece of wood, drilling a blind hole in it and filling that with lead, thereby making a fearsome top-heavy weapon.

But This Is All In The Past, Right?

No - most Irish people have, at one time, played a very watered-down cousin of stick-fighting: hurling. This is one of the most popular sports in Ireland and is possibly derived from the same source as stick-fighting. A section of the Fiancluichí was called Iománaíocht, from which 'summer hurling', and ultimately, modern hurling as well, originated. Another section again was called Camániocht: from this, 'winter hurling' was derived. Modern day 'shinty'3, which is still played in Scotland, came from 'winter hurling'.

How To Make Your Own WMD

To make your own Weapon of Minor Distraction you need to:

Irish cudgels...should not be too long - three feet and a few inches is an accommodating length, naturally top-heavy - and have three to four natural lumps

So remember, the next time you attack somebody5 with a stick, you are paying tribute to an ancient and noble sport!

1These cannot be avoided... ever.2A big spiky medieval ball on a chain. Swing it around your head a few times and it will not be stopped without taking a frontal lobe. Made famous by the Crusaders, the Witch King of Angmar and that lethal schoolgirl in volume one of Kill Bill. For more big, heavy, swinging weapons of skullduggery, check out this.3So-called because at one stage the losers all got a smack on the shins.4Unless you're after putting it in the dung hill. If you did, then it may smell of something else.5A robber, your partner, crazy evil genius, mother-in-law etc.