Multiple Remote Controls Content from the guide to life, the universe and everything 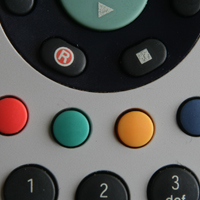 The multiple remote control is a solution to a problem you don't even know you have, and probably don't have at all unless you have either a serious entertainment electronics fetish, or simply too much money. The latter is preferable, because multiple remotes are not cheap.

What Is a Multiple Remote?

First of all, let's be clear on what it's not. It's not one of those cheap and tacky 'all-for-one' type remote controls you can buy when you've lost your actual TV and/or video remote down the back of the sofa. Oh no, those things are strictly for amateurs. The true multiple remote is a marvel of electronic engineering designed to control, from one compact unit, a panoply of home electronics the like of which most people have better things to do than to spend their money on.

Do I Need One?

Go into your lounge. Count the number of remote controls. Now count the number of electronic gadgets you have which can be controlled remotely. If you are very, very lucky, these two numbers will be the same. If the number is four or more, you may be able to find a use for a multiple remote. This is not to say you need one. In truth, nobody needs one. But nobody needs a Porsche, or a designer jacket, or a complete set of signed Douglas Adams first editions. But you have to admit, they'd be jolly nice to have.

So What Does it Do?

The basic multiple remote will simply replace the controllers you previously used for your television, VCR, laserdisc player, DVD player, surround sound amplifier, CD player, radio and anything else you may have lying around your lounge which will accept an infra-red signal. It will do this by 'learning' the signals from the original remote1 and assigning them to buttons on the multiple remote. You will now have full control from one small slab of black plastic, enabling you to multiply by a factor of up to eight the frustration involved in having to find the thing when you lose it.

Picture the scene - you're a busy man or woman, you've come home late and stressed from the office, and you want nothing more than to slump down on the sofa and watch the 'lobby shootout' scene from The Matrix. But a daunting task faces you. First, you must switch on the DVD player2. While that goes through its start-up sequence, you must switch on the amplifier, select 'DVD input' and activate the appropriate surround sound setting for the film you're watching (Dolby 5.1 Enhanced, say) and set the volume level to 'make my ears bleed but leave the windows intact - just'. That done, you must switch on the television, set the screen mode to 'anamorphic wide' and the light level to 'night', and reduce the volume to zero. Once you've done all that, the words 'welcome... to the real world' should be blasting out of the speakers as the disc starts up. It's now time to press 'up' three times to go to scene selection, followed by 'enter'. Then up, and right four times, then enter, up, down, right, and enter again. Now, if you've any sense of hearing or indeed any sense at all, cover your ears, because it's about to start, finally, after a grand total of 23 separate button presses on three different remote controls.

Obviously, a busy person like yourself can't waste energy going through a rigmarole like that. Which is where the 'macro' facilities on the cleverer (ie, more expensive) remotes come in. Picture the scene again - you slump down, but this time, instead of playing like Rick Wakeman on your various disparate slabs of plastic, you tap a single key on a far more tasteful device and sit back. A pre-recorded set of commands is issued from the remote, complete with timing gaps to take account of things like start-up times for DVD players, thus leaving you free to get on with the important task of relaxing in anticipation of three minutes of firearms porn3.

The multiple remote is an excellent toy for people who like toys to be black, or shiny, or both, to light up, and to do wacky things they do perfectly well themselves for a fraction of the cost. As such, they are an almost completely pointless waste of money. This Researcher loves his.

1If you've lost the original remote - go to the back of the class!2We're assuming at this point that you keep The Matrix permanently in your DVD player in case someone comes round and you need to impress them and/or make them go deaf. Doesn't everybody?3Gore Vidal said, Pornography is anything you fast-forward through to get to the good bit.