Skittles - the Confectionery Content from the guide to life, the universe and everything 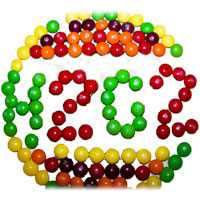 Skittles are a sweet form of confectionery composed largely of sugar. They are, in appearance at least, somewhat similar to smarties, although they are fruity rather than chocolatey, so don't be fooled. They come in a number of fruity flavours, all within one packet, and a variety of gaudy colours. This probably explains their slogan, 'Taste the Rainbow'.

They consist of a space-age hardened sugar coating and a squidgy, fruity, sugary innard. They are circular, biconvex objects, just under a centimetre across.

They are manufactured by Mars, and can be purchased from almost any supermarket or convenience store using the native currency. It appears that they are only available in the US and UK from preliminary data gathered on h2g2. If you're planning on going back in time, you may wish to know that they were introduced in 1974...

They are bought in small plastic packets which contain them within a sealed atmosphere before consumption to maintain their freshness. This packaging can normally be opened using on the fingers, but in the event of a containment emergency, nails or sharp blades can be employed in a bid to pierce the outer covering.

There are, on average, around 42 Skittles to a bag. This may be coincidence. It may not.

Take skittle. Place in mouth. Chew. Swallow when you feel it's sufficiently liquidised to do so. Premature swallowing may result in discomfort.

Though the overall sensation during consumption of skittles is one of sweetness, each individual colour has its own flavour, apparently. There are also a variety of different packets available, each of which is has different flavours contained within. This is an approximation of the flavours available in each packet type:

However, despite there apparently being 5% juice per skittle, they all taste broadly the same, being very very sweet and only a little bit fruity.

At the time of writing, Skittles (British, Original Skittles, that is) comprised:

What People Have Said about Skittles

Ogden Nash claimed that 'there is more to life than beer and skittles'. Quite what he meant by this, we don't know. He seems to be implying that the ordinary people have given some supremely elevated status to these fruity confections.