A Visit to Skomer, Pembrokeshire Content from the guide to life, the universe and everything 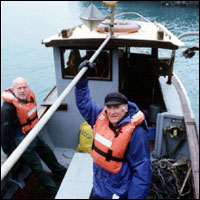 In a sheltered north-facing cove, just short of the tip of the Marloes peninsula in south-west Pembrokeshire in Wales, a narrow concrete path stumbles down to the edge of the sea. There, on most mornings from Easter to Michaelmas, unless the wind is from the north, or unless it is a Monday, or unless the sea is too disturbed, a group of 20 or 30 cagouled and anoracked figures stand waiting, chatting cheerfully, a little excited.

Some of these prospective sailors will have booked their passage more than a year previously and, for them, the anticipated day has arrived at last. There will also be a tension in the air, especially among the later arrivals, for the boat that will collect them is limited in size and license. Even some of those who have deliberately arrived way too early may be surreptitiously counting heads, for there are priorities in boarding rights. Those living temporarily on the island, or just staying overnight, will be boarded first, and there are no outward signs as to which of the small crowd they may be.

The cove shelters three or four small boats, and two men in a dinghy move from one to another, tying things, untying things, stopping to chat or to light a cigarette, teasing the waiting group. Eventually they settle on one of the boats, slightly larger than the rest, and a small engine phut-phutters into life. Lines are untied and the little boat moves out to sea to disappointed mumbles from the shore. But then the boat swings on a wide arc and approaches the boarding point. The smallness of the boat and the length of the queue seem mismatched, but, to the relief of all concerned everyone boards, even some late-running arrivals, and all are crammed tightly on the wooden benches that surround the life raft in the well of the boat. All, now, are happy and expectant. The adventure is about to begin.

For the first five minutes of the quarter-hour voyage little happens, except that the island of Skomer, the destination, slips slowly into view. This is the only boat allowed to land on the island in this maritime reserve and the engine is deliberately small and quiet so as not to disturb or pollute the sea or air. A few gulls follow behind, playing in the wake. The crossing is not always calm, and quite often is cancelled, but on a lucky day the sun will sparkle off the sea and porpoises and dolphins may rise to entertain. (In 1975 a bottle-nosed dolphin took to shepherding the boat all summer long). But then, as the turbulent Jack Sound that separates island from headland is crossed in a sweeping semi-circle, the boat is suddenly among birds. Little guillemots whizz past as if on clockwork wings. Razorbills, assorted gulls and, nearer the island, the first puffins sit on the sea, rising and falling with the waves. The noise, bird chatter, increases and the boat passengers fall silent. This is what these humans have come for, to see, hear and be among the birds, and the birds couldn't care less. They have their own business to attend to.

Landing on the Island

The boat approaches a small landing platform, moors, and discharges its passengers. They have landed on Skomer. And there, no more than a couple of metres from the heads of the visitors are guillemots and razorbills, sat on a rock shelf, completely oblivious to their guests. The people are gathered together and instructed as to the ways of the island, the paths to follow, the rules to obey, the things to look out for and the time of the departing boat. Thus entrusted, the various singles, couples and groups slowly make their way up the winding path and on to one of the signposted trails. Those few booked for an overnight stay will head first for a group of old farm buildings in the centre of the island, now converted into pleasant and sufficient accommodation for the permanent staff, naturalists and students, and the temporary guests. The day visitors turn left or right for a clockwise or anti-clockwise circumnavigation.

These days Skomer is unpopulated, save for the wardens and volunteer naturalists. It is one of a group of four similarly empty (of humans) small islands off this southern arm of St Brides Bay. Much farther out to sea is Grassholm, where gannets live in a vast colony. Immediately next to Skomer is the much smaller Skokholm. Just around the point is almost-land-linked Gateholm. People have farmed here, worked here and, maybe, worshipped here for many thousands of years, leaving their traces behind. The islands have all been farmed in their time, with animals ferried or forced to swim to and from the mainland. The most important of the animals, as far as modern Skomer is concerned, are not sheep, cattle or ponies but rabbits. An anonymous farmer in the 13th Century had the bright idea of farming rabbits here, for their fur (a trade that continued until the 1950s). The rabbits duly escaped, burrowed and nibbled away and have continued to do so for the hundreds of years since, until now, when the honeycombed turf has become home not just to the rabbits but also to hundreds of thousands of Manx shearwaters1 and many thousands of puffins. It is they, the puffins, that give Skomer its fame and brings the visitors armed with cameras, binoculars, sketch pads and notebooks.

The daily visitors will follow directions along cliff-top paths cut through pillows of thrift and will eventually arrive at the opposite coast, onto a small, maybe ten-yard-long, wooden causeway overlooking a cliff face called the Wick, the shelves of which are crammed with serried ranks of squawking, shuffling, jostling guillemots, razorbills and gulls of many denominations. The interest here, though, is not immediately the cliff face but the causeway-protected burrows beneath and around it. These burrows are puffin homes. The puffin is a pigeon-sized bird, black and white, with a large multicoloured beak and a clown's tear by the eye. They look a little comical and seem to enjoy both the image and their celebrity. The puffins arrive from the sea, pause for photo opportunities and then dive into their burrows to see their (lifetime) mates. Once pleasantries have been exchanged underground, the bird emerges, poses similarly for the camera and then launches itself seaward. All this happens all around the feet of the visitors, puffins popping up and down burrows faster than the camera-laden humans can turn, focus and click. It is a great game that the puffins seem to enjoy and nearly always win. In July the adults are feeding chicks and their beaks will often be laden, crossways, with sand eels. Sometimes, though, the photographers manage to get their photos.

To stand here at night, as the over-nighters will discover, is an altogether different experience. Cheek by jowl with the puffins live Manx shearwaters and these birds are nocturnal on land, perhaps in an effort to avoid predation by the rapacious great black-backed gulls, for the shearwaters are very clumsy outside their burrows, their feet set very far back on the body, the better to swim underwater. The darker the night the greater the noise, for moonlight only encourages the gulls. The birds below ground shriek and scream to guide in their food-bearing mates, returning from a day's fishing far, far from land. It is an unearthly and indescribable cacophony, for these birds number in tens and hundreds of thousands on Skomer, one of the very few places they are found these days. It is amazing how a single bird can identify the call of its mate in all the surrounding noise. Equally astonishing is how the chicks, deserted by their parents at the end of summer, will stumble out of their burrows, never having seen the light of day, launch themselves off the cliffs and fly 6,000 miles to South America without practice, without guidance and without compass.

Although puffins and Manx shearwaters are the most celebrated of the Skomer seabirds, visitors will see many others: fulmars, petrels and kittiwakes as well as the more common gulls and terns. The great black-backed gulls in particular keep watchful eyes on two-footed visitors from their nests, inland among the clumps of thrift. A stray gannet from Grassholm, perhaps, will soar past on the cliff top, wide wings still and silent. Red-beaked and -legged oyster catchers, usually in pairs, will stand on their rocks, waiting for the breaking waves of the next tide to recede and expose their next meal.

In the island's centre, a shallow pond surrounded by marsh land provides homes for ducks, lapwings and curlews. There are no foxes, rats, weasels or stoats to feed on the birds' eggs, but mice and voles2 abound, as of course do baby rabbits. All are prey for the few cruising falcons and owls that have made their home here.

As for flora, there are no trees, the Atlantic gales have seen to that, but swathes of bright yellow gorse announce the coming of spring. Then the thrift comes to life, in all shades from white through pinks and reds to purple, covering the springy turf. In May and June the island turns blue with modest native bluebells and then immediately flushes pink with campion. Bracken follows, rising as bright green shoots but soon turning dark brown and then autumnal gold as it dies away again. The cliffs and rocks below are covered in lichens yellow and crusty white, above a band of black, washed clean with each tide.

But, time presses on, there is no isolation here. There is a boat to be caught. Just time for a cliff-top picnic, and then on round the island, and back to the landing stage. The fat lazing seals beached nearby can hardly summon the energy, mid-afternoon, to wave goodbye. As for the birds, they have hardly registered your presence. Time to return to the mainland.

Skomer is a well documented, much studied nature reserve. It was visited last year by the BBC programme Countryfile. There are live cams observing Manx shearwater nests and views around the island, best accessed from the excellent website of the Welsh Wildlife Trust who administer the island and can provide all the information required for a visit.

1Seabirds native to Skomer.2Skomer has its own indigenous species of vole.