A Gluten-free Diet Content from the guide to life, the universe and everything 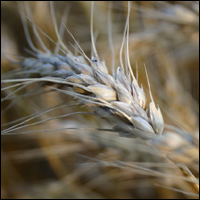 Coeliac1 disease affects about 1 in 100 people, for whom it can be downright dangerous to consume wheat – or more specifically gluten, the bit of the wheat that does the damage. For these folk, gluten-free means absolutely none, not even a pinch of flour. As well as just physical symptoms such as abdominal pain which can last for up to 3 days, exposure to wheat can cause the coeliac-sufferer to experience altered moods including paranoia. Other people who avoid wheat don't have such a serious reaction to it, but may describe themselves as 'wheat-intolerant', suffering from abdominal discomfort and other symptoms after eating products containing gluten. They may find that rye and oats are acceptable, but for the rest of this entry we will aim for complete absence of gluten.

So how easy is it to go gluten-free?

The most important meal of the day, and thankfully, one of the easiest to remove gluten from. All breakfast cereals based on wheat are out, naturally. That includes Weetabix, All-bran and Cheerios. Many bought mueslis will also contain wheat flakes, so it's vital to check the ingredients label carefully2. Cereals based on corn or rice are usually OK, although some contain malt flavouring, another source of gluten, so it's worth checking that cereals are explicitly gluten free. You can make your own muesli or granola ensuring there are no wheaty elements. Toast is out if it's made from ordinary bread, and gluten-free bread tends to have an odd texture. Fruit and yoghurt are fine, and a smoothie made from half a banana, a handful of berries and a good dollop of natural yoghurt is a delicious and healthy start to the day.

A fry-up meets the requirements as long as you ditch the fried bread, but those calorie-laden croissants and danish pastries are off-limits. Eggs are useful, particularly as they can be cooked in so many ways. Swap the bread-based soldiers for asparagus spears to dip into a soft boiled egg, have scrambled eggs with smoked salmon as a treat for a weekend brunch, or make a mushroom omelette.

Midday meals are one of the trickiest to adapt to a gluten-free diet, given the predominance of The Sandwich and its wrap and bagel cousins. You could make your own sandwiches (although gluten-free bread isn't the nicest thing in the world) – egg and cress as a filling works well with the slightly stodgier texture of allowable breads. If you can find rice wraps, they make a good holder for sandwich fillings. Some establishments now offer an unwrapped sandwich, using lettuce leaves instead of bread, or will just make you the filling (the 'bread-less sandwich', Pret à Manger calls their version).

Shop-bought salads can often be very pasta based (another no-no). If you can make and bring your own lunches to work then that will usually be the best plan. A large pot of vegetable soup made at the start of the week, perhaps with some lentils or beans for protein, will last a few days. This is tasty when accompanied with rice crackers and a slice of cheese, or a scrape of Marmite. A cold slice of spanish tortilla travels well as a packed lunch. Baked potatoes are a healthy option, filled with a choice of tuna, cheese or prawn cocktail. Asian foods based on rice are OK, so sushi is an option, as is a Thai-style salad made with rice noodles. Soy sauce however contains wheat so avoid dishes cooked with it and be aware that woks are not cleaned between dishes, so even a safe-seeming dish may have measurable amounts of gluten in it. Graze on some snack type foods such as humous with crudites, or cheese and pickles, or Spanish tapas avoiding anything battered. And on special occasions, you can have chips3! But avoid the gravy or curry sauce, as it may well have been prepared with wheat flour. Sensitive coeliac sufferers have to be very careful of fried items in case the oil was used for frying things in forbidden batter. Some chip shops now offer gluten-free batter, but this doesn't get round the 'same oil' problem.

'Meat and two veg'4 are usually OK; it's the sauces that can be the danger point here. If you're making your own sauce, then alternatives to wheat flour such as cornflour or rice flour are safe enough. Tapioca flour is another store cupboard item worth experimenting with, both for puddings, and also for mixing with rice flour for thickening and sauce-making. Gram flour, made from chickpeas and used in making onion bhajis, is another useful alternative to wheat flour.

Pasta and pizza are out, except for gluten-free versions, which usually taste dreadful. A more palatable version of pizza can be made by using dried potato flakes mixed with egg to bind, and cooked a little to firm the crust before adding the topping. Stir-fries can be served either on a bed of rice, or with rice or buckwheat5 noodles. A Mexican chilli (either con or sin carne) goes well with a baked potato, and corn tortillas made with maize are on the safe list. If you fancy a more northern European style dish, try Lobscouse, or potatoes with Green Sauce. Head south to Italy, where polenta is often overlooked as an accompaniment, but can be served in thick slices, grilled or fried and topped with a juicy tomato and vegetable sauce. Stateside, a more common from of corn is grits. Our ever versatile friend the egg can be used to rustle up an omelette with the filling of your choice, and accompanied by a crisp green salad makes a well-balanced meal. As you'll have gathered, following a gluten-free diet does mean you cook more of your own food.

Beer and stouts are out, wine and gin are in. The jury is still out on whether whisky (or whiskey) is suitable; you'll just have to conduct a detailed taste test yourself to find out. Fruit juices and sparkling sodas are fine. Water  – go on, you know you're supposed to drink about 2 litres a day of the stuff!

Chocolate is OK! That's only good news if you actually like chocolate of course, but many items in the candy store will be wheat-free. And there are a good many recipes for flourless cakes using nuts instead.

More and more supermarkets now stock special gluten-free products, but these can be very expensive. The list of ingredients on any prepared food has to be read carefully, although unless the recipe changes, once you know that a certain brand of soup is OK then you can make it a regular item on your shopping list. Guidelines and booklets available on the web and elsewhere can be a very useful resource when you're just starting out on a gluten-free diet. Modified starch is always wheat.

Businessmen and women will know how their spirits droop when they have to attend an all-day conference or course, where they will be greeted with scones mid-morning, a sandwich lunch, and biscuits in the afternoon, none of which is suitable to eat. In restaurants, the salad bar is a mixture of friend and foe: the dreaded crouton is threatening to take over, and dishes based on couscous/bulgur/cracked wheat are to be avoided. All sauces need to be questioned, and restaurant staff will appreciate it if you do this before ordering. Ideally, warn the chef well in advance. Greek food is pretty good without the pitta bread! Italian restaurants can be tricky because of so much pizza and pasta, although antipasti dishes such as melon and parma ham are fine. In Spanish restaurants lots of tapas are wheat-free, as is paella. In Asian restaurants, avoid udon noodles and go for rice or potato bases instead.

Here's a sample week's menu, with suggestions for 3 meals a day plus snacks.

1Sometimes spelled celiac.2This piece of advice will be repeated several times in this article.3French fries.4The classic British dinner of meat, potatoes, and some soggy vegetable accompaniment.5Buckwheat is actually a fruit, despite its misleading name.